So on Saturday I had some free time to try the Prince August 25mm moulds and try different types of metals. The kitchen oven was used for this process and it worked a treat though I need a better work area as I made quite a mess.

I have two Molds - British Infantry and Belgian Chasseurs.

Below are the first run  - one mold held by clamps, the other rubber bands (To see if they work). My first problems is judging how much to pour as I did too much the first few times. 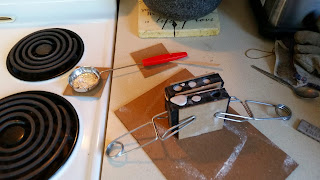 Safety equipment - I need new gloves though and should probably not be doing it all next to the toaster. 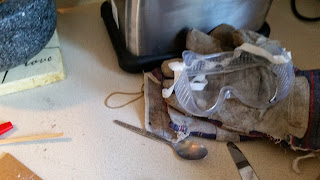 The first castings I have ever done - I was really happy ! The dude on the right got melted down as his musket was poorly formed. 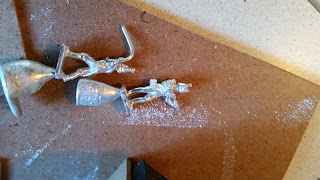 I tried a few more and they were bad so I simply tested various things I need to do to get a good figure. A good temperature, a better and faster pour. 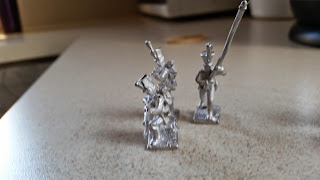 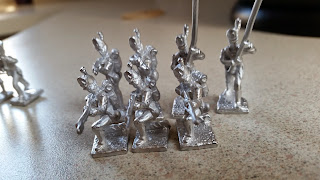 Overall I enjoyed it - the figures are never going to win any beauty contests but to chuck out a few units I will use them.  I saw Basil's figures yesterday at the CWC and they paint up well so these will complete my allied armies.
Posted by Jacko at 2:58 PM 5 comments:


In my new found enthusiasm for taking photos I have unfortunately forgotten a simple rule of the whole process - using the focus ! So alas a raft of images are now ruined due to my forgetfullness but I have learned my lesson.

The closest thing to a photo is below with another 2 French line units ready to be based. and the Tri-colour placed on. My Waterloo progress is full on as per usual - only 3 more units to complete and then finish off the artillery and generals and that is the figures all done. Then it will be a week of basing and the whole French Army is complete. 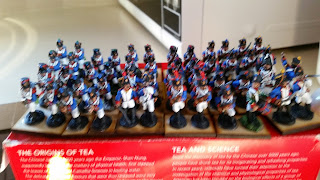 The only photos that turned out any good were non wargame related.
Bird on a roof (yet to be identified) 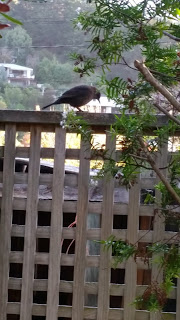 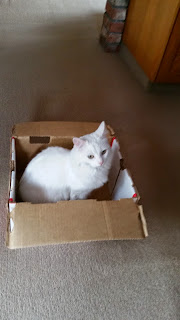 My painting continues for the Waterloo refight. Unfortunately a sudden family illness had me at the hospital a fair bit last week and then for the past few days staying away from home looking after a family member.  One thing I did manage to sneak into my away kit was a tonne of soldiers and paint  !

Apart from household duties of cooking\cleaning\entertaining visitors I did manage some time to paint and it was quite relaxing. I have painted another 78 French infantry and also started a test figure for the Nassau Regiment I am providing for the allies. Recently I picked up a few boxes of HAT 28mm figures and they are quite dandy little things so I am going to use the French Voltigiers for the Allied Nassau troops who wore the French uniforms.

Below is the first test figure - Easy to paint and I am really happy with the output. They are going to look splendid ! As the uniform is made up of very simple colours it was a breeze to paint and I am looking forward to the rest - the same with the Legere. Things get complicated for the rest of the french of course - white breeches, coats, lapels, lace, shako cords etc etc  so its nice to have a simple uniform to take care of. 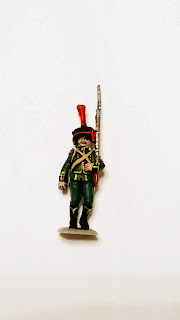 Hopefully by the end of this week that will be the French Infantry completed and I can base them up and get some decent photos.

Still left to do is:

1 British Foot, a tonne of French Artillery and some generals.

To Guard or Not To Guard ?

The Christchurch Wargaming Club is hosting the Waterloo refight on June 20th and as such I am providing Reille's Corps and some parts of Kellerman's cavalry. This amounts to something in the order of 1000 figures which I am busily sorting out. Afterwards I am tempted to sell someone of so I will how that goes but the problem is I am quite attached to some of them - oh well I can sell them when I'm older !

Only one of these is an Imperial Guard unit - a minifig Foot Chasseur unit of 24 figures. I was never going to include the Guard at all but there is that feeling deep down that I should at least have a few.

So at some stage in the next while I will try and pick up 24 Grenadiers, 24 Middle Guard, 2 guns and most likely 12 Chasseurs a Cheval. Victrix look like good candidates currently as their Middle Guard is due soon.

I have also taken the plunge and ordered two of the latest Prince August moulds for Waterloo British infantry and Nassu troops. I have always wanted to try casting my own figures so now I will get the chance. The newer moulds are more detailed I guess but this project is more to satisfy my own experiment than get some finely detailed troops. I'll get some model quality metal to try out and then look at melting my odds and sods bucket.

PA542: 25mm Netherlands: Foot Chasseurs Moulds #2
The odds and sods bucket is made up of the following:
Of course I will be testing the metal melting process first and not mixing makes of figures as the metal content will differ I'm sure.

On the weekend of June 21st I will be taking part in a Waterloo refight using general de brigade. So my vast french forces are under rennovation and rebasing in order to get them ready.

I shall be Reille's corps and I have enough figures (1000 I think) for the entire Corps plus some brigades of cavalry. It shall be a spectacle indeed and I am looking forward to seeing my vast legions march forward.

The nightly sorting and painting of Minifigs, Hinchcliffe and Redoubt getting ready for the big day. 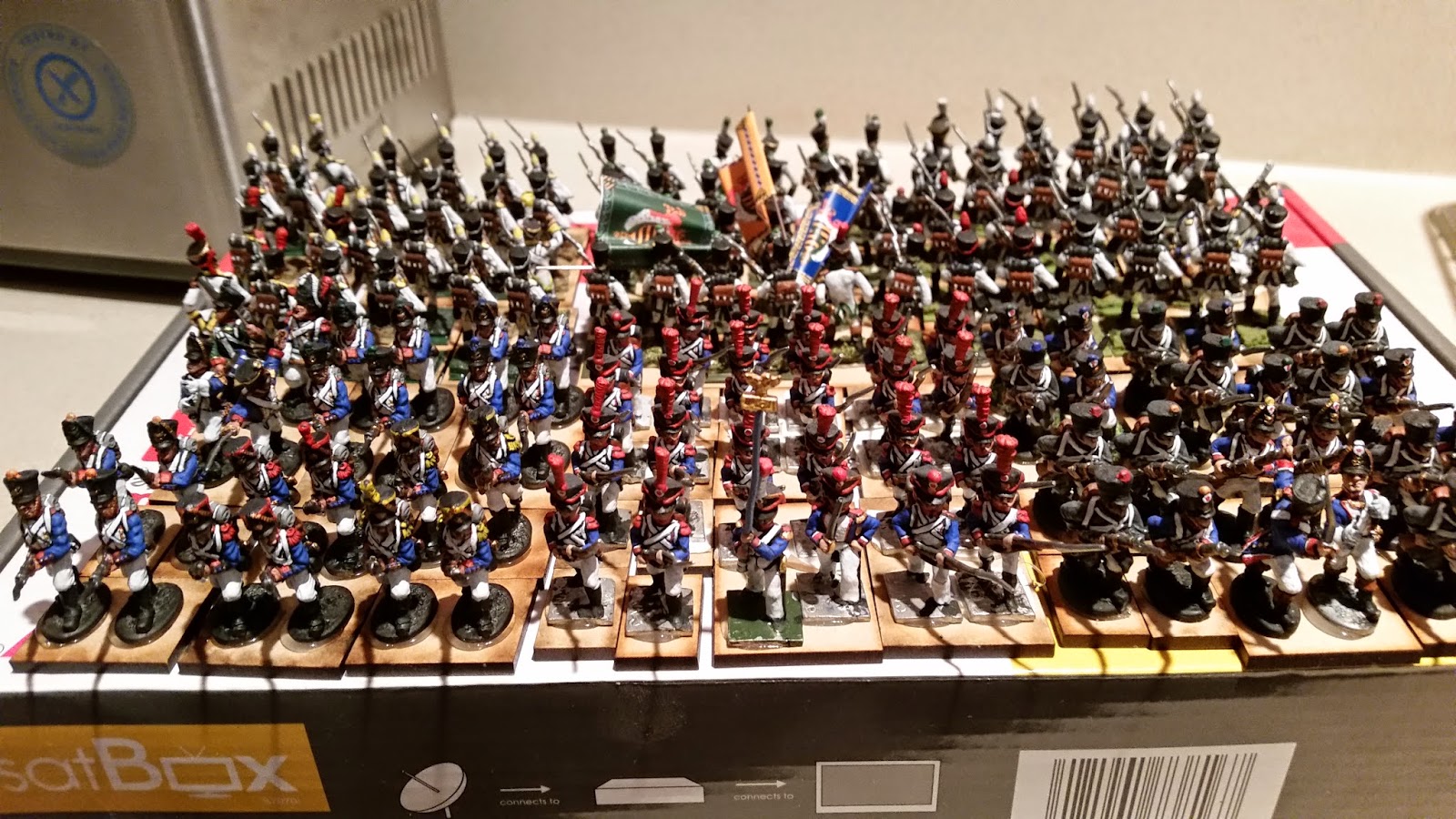 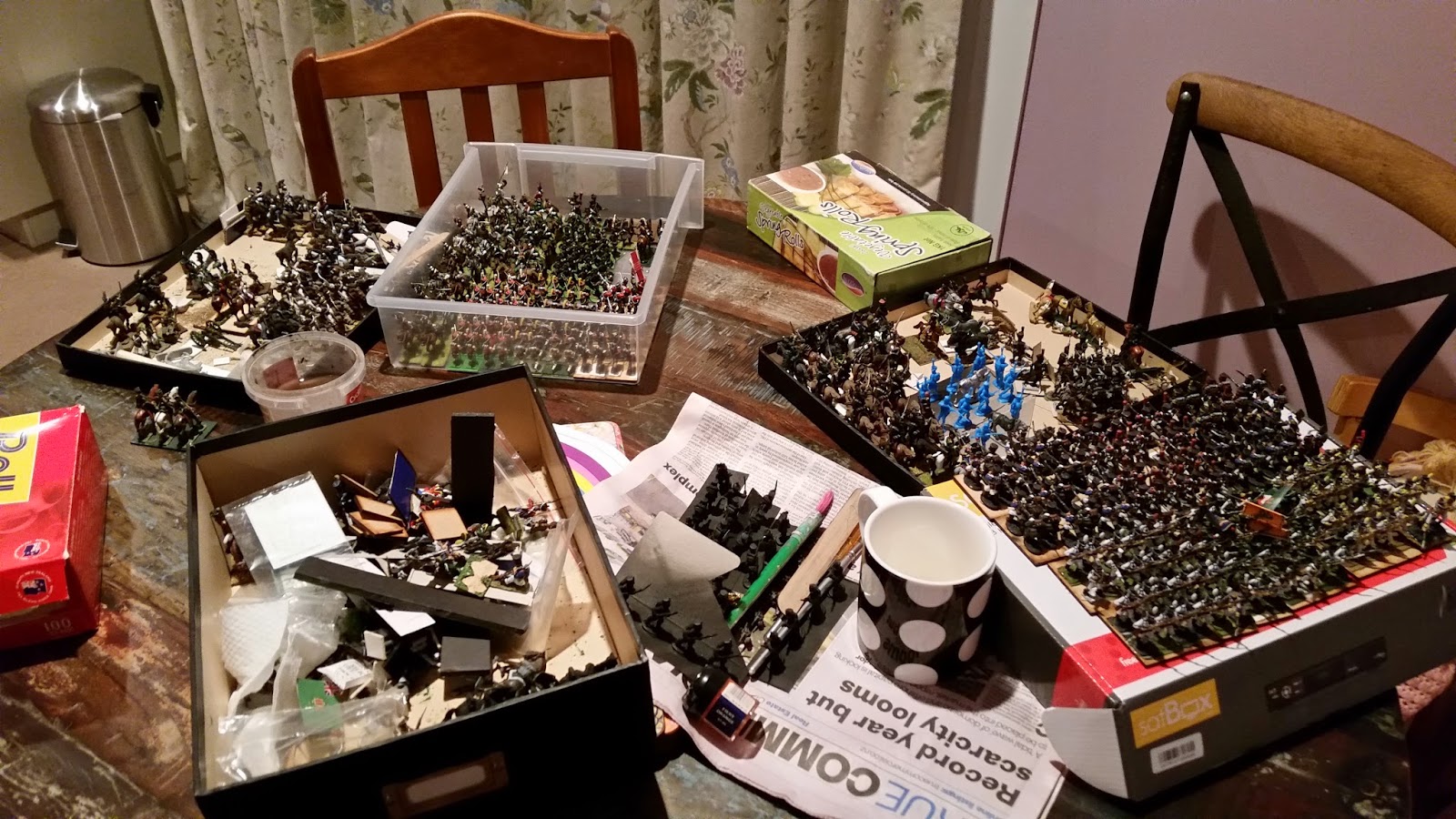 As such we need some practice games so yesterday Chasseur and Archduke Piccillo and myself visited the club to get used to the rules. The game was a small British force under attack from a slight larger French contingent. The starting view from the Westphalian lines below. 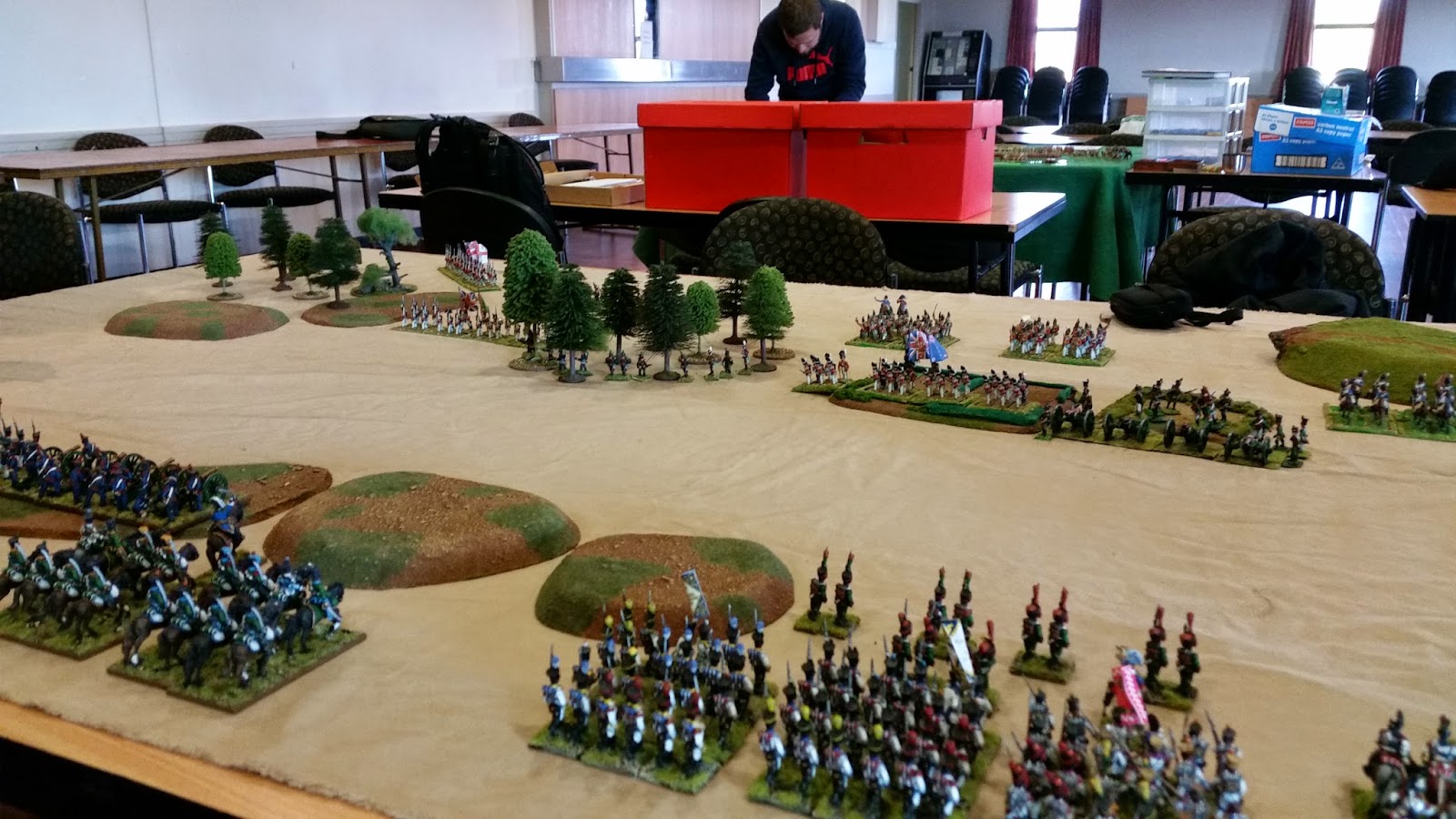 I wanted to see how french columns fared against British line and artillery -  So straight up the guts at was......drums beating, flags waving in the wind. 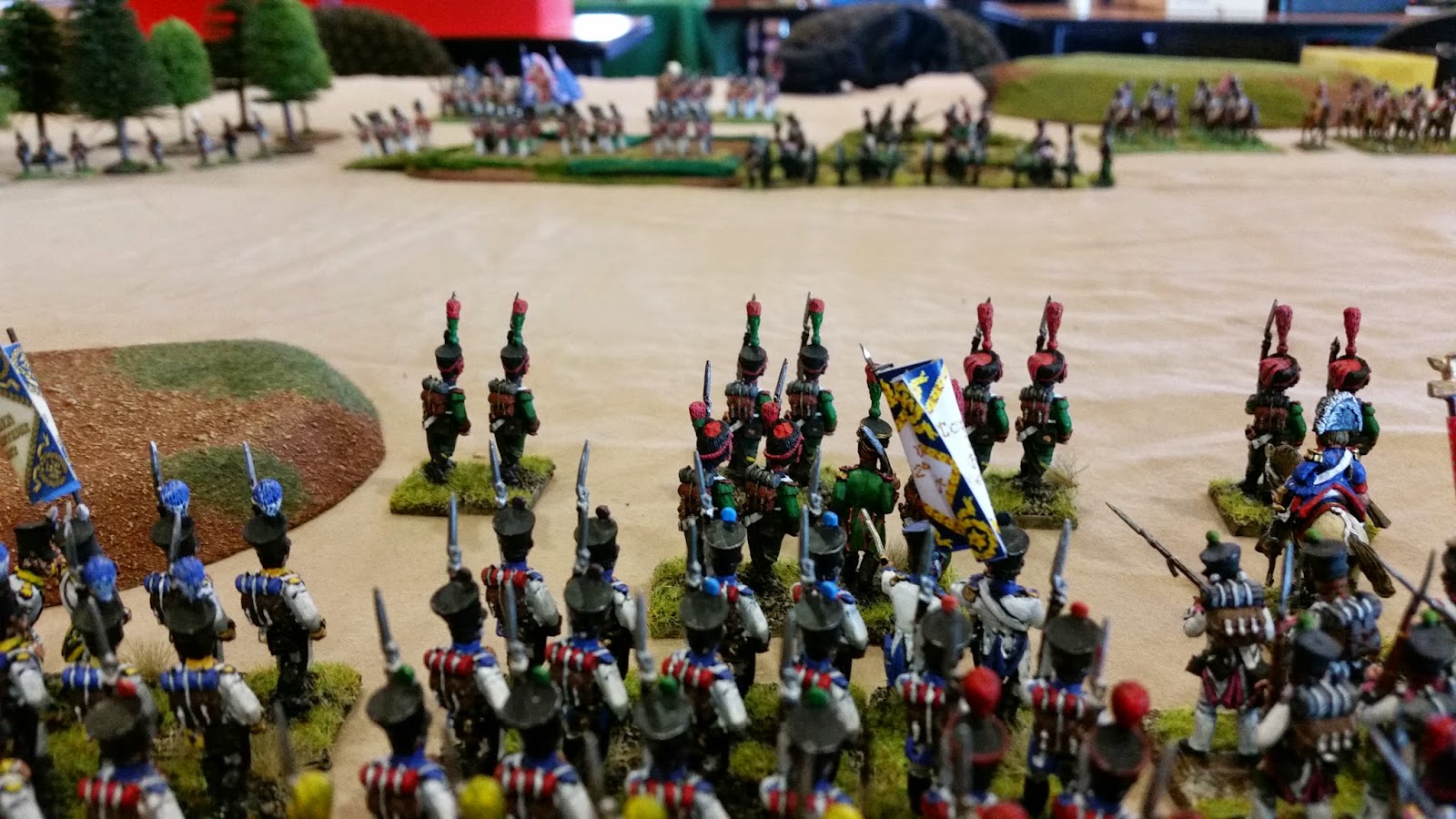 The artillery decimated one column but the other two pressed on into the guns, forcing the gunners to flee. A satsifying result ! 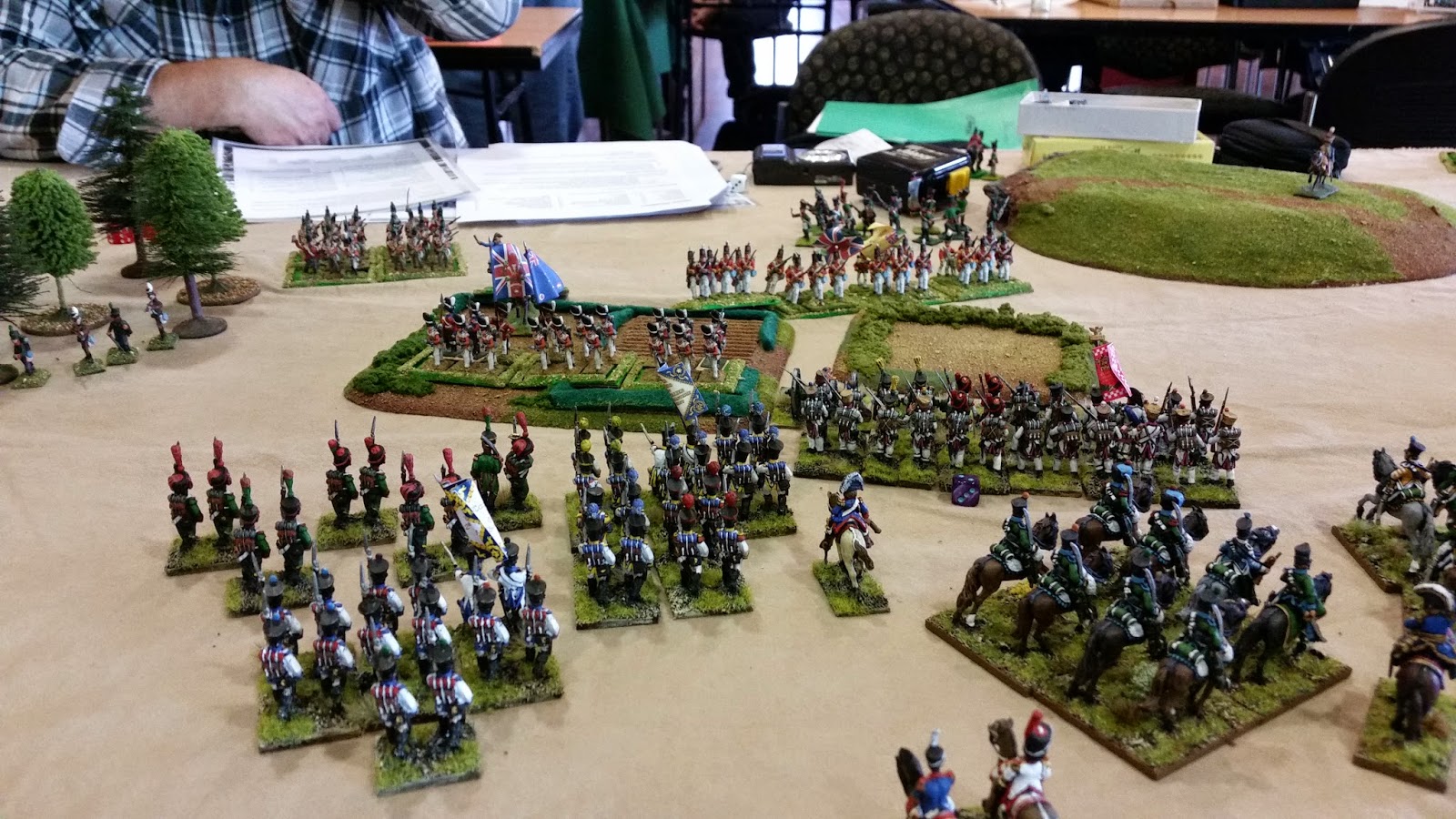 On the left flank Marks French Columns surged forward towards to 69th Foot. 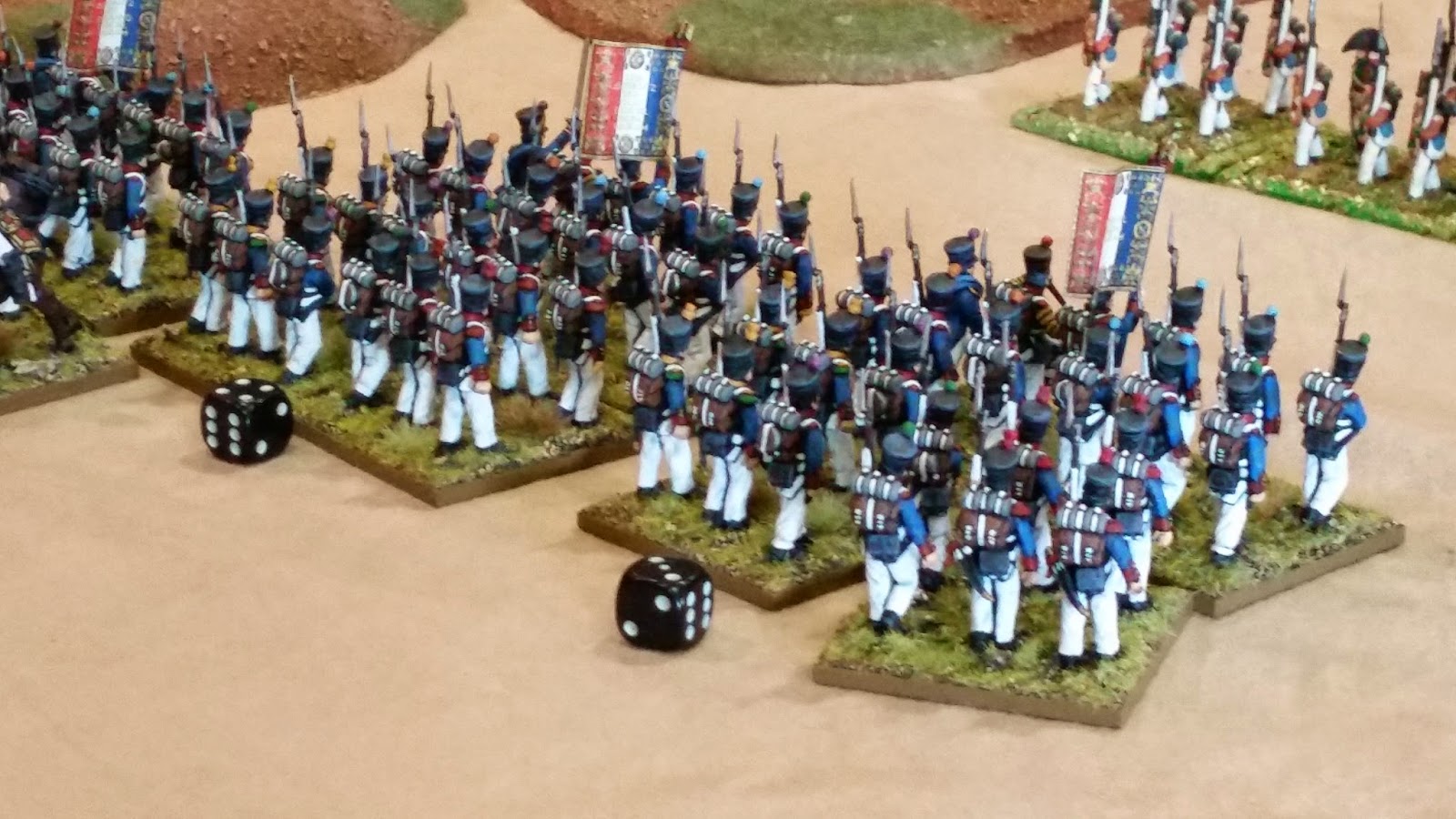 Countless times the steady volley fire of the 69th forced back the French columns. Over a series of turns they forced the French back until they finally retired. 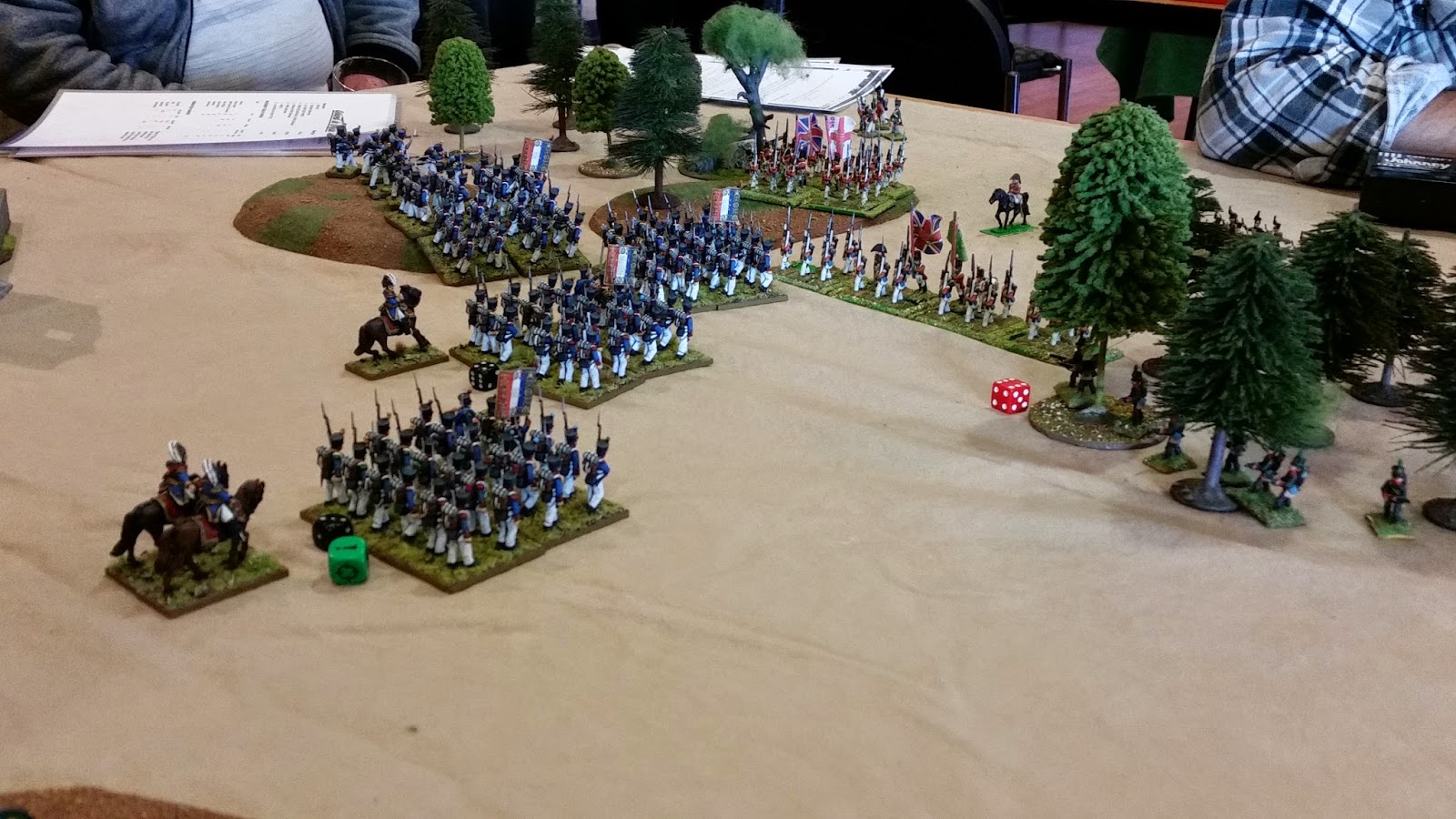 The right flank cavalry finally see off the British mounted contingent and secure the day. 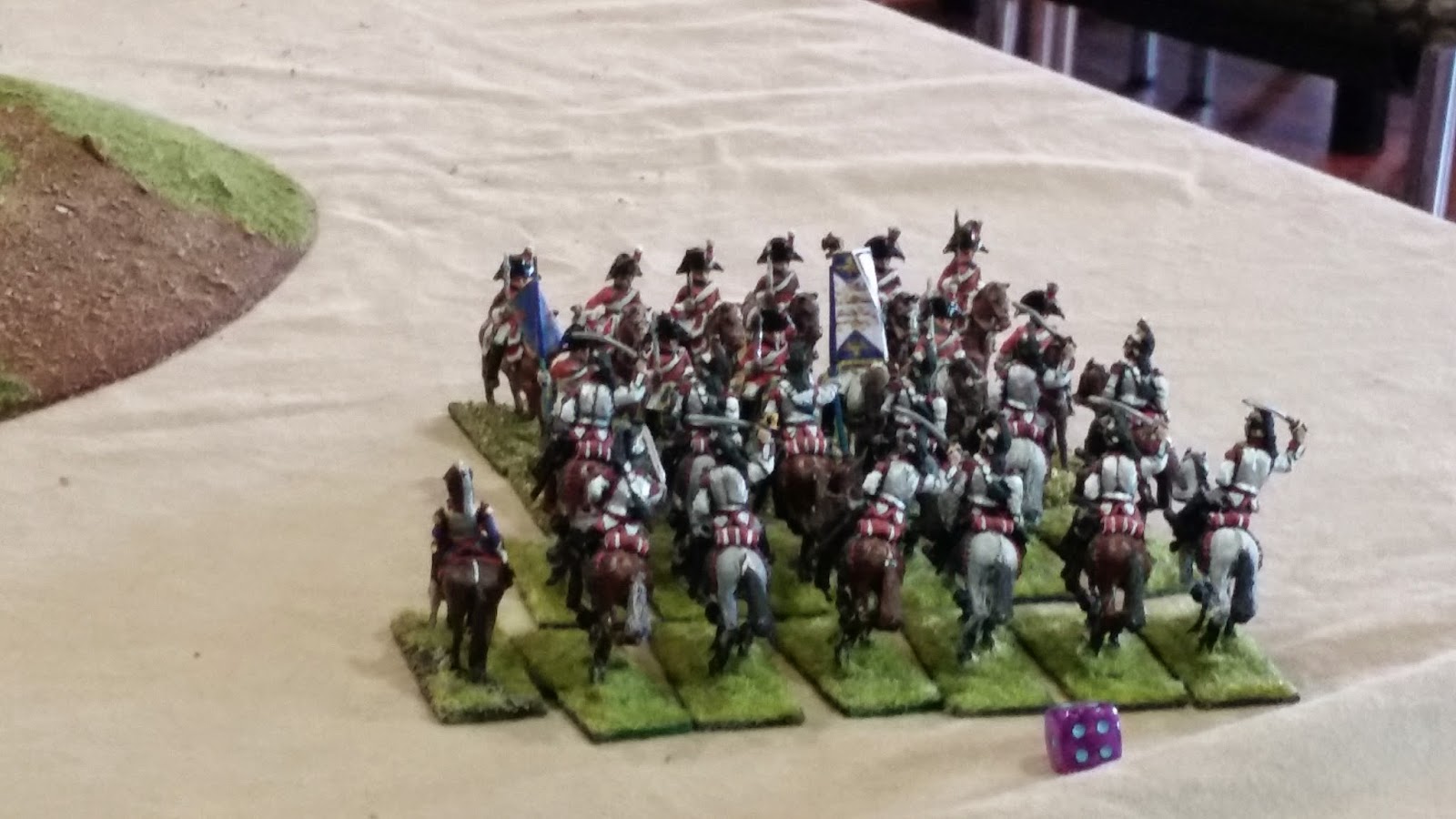 The Chasseurs no doubt about to warm up on the pursuit of the british. 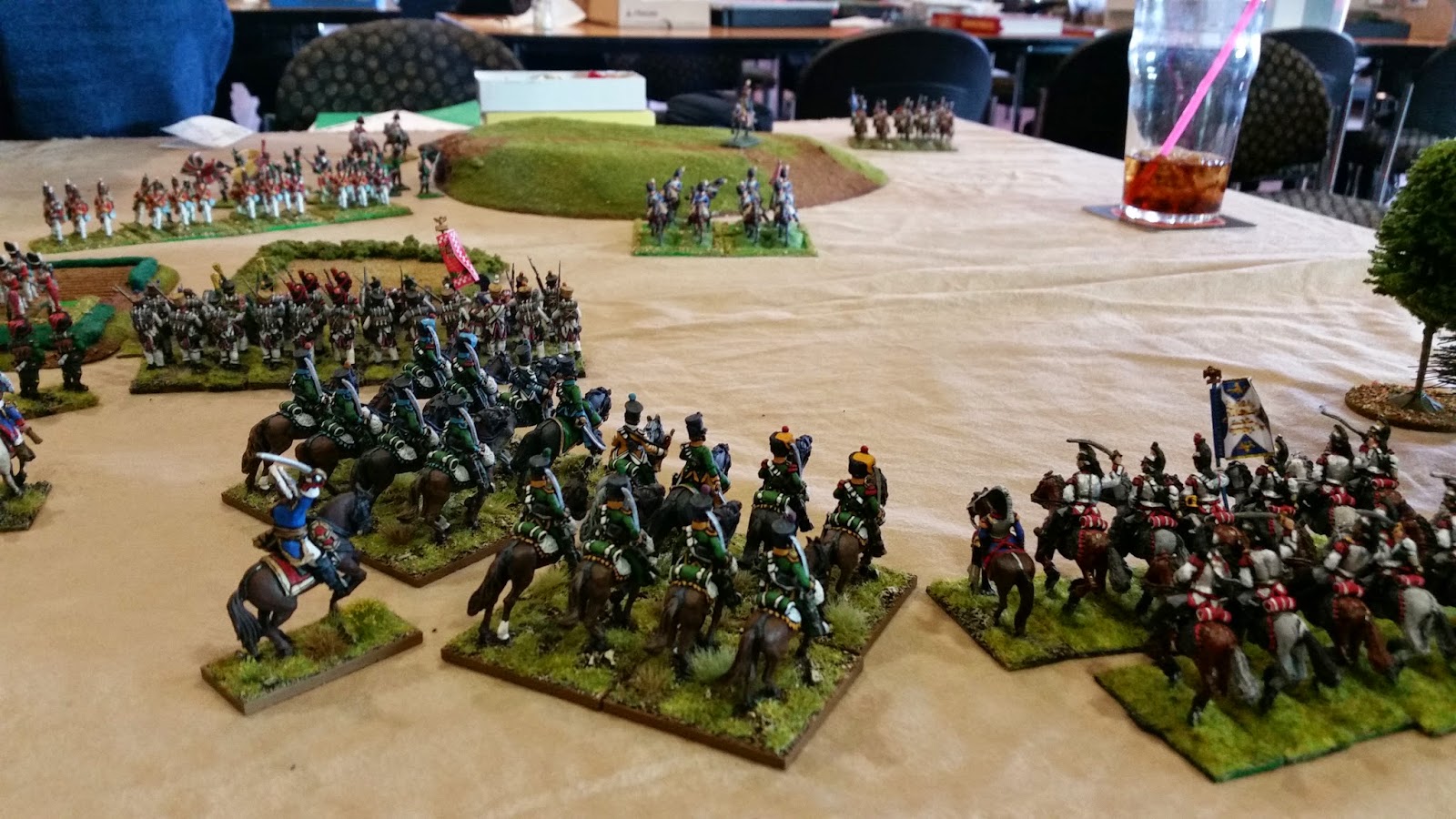 The result a french Victory but a good try out of the rules. Hopefully another practice game will take places I want to test some of the finer mechanics of the rules to get ready for charge at the British lines.