The starting 8 Neopolitans, 8 Pavlov Guard and 2 french casualty figures (for the lulz) are coming along very nicely. They only have the straps and some tidy up to do and then I can move onto finishing the Neopolitans and then the Pavlovs. The Voltiguer company really really stand out - white uniform, pink facings and yellow\green plumes - they look like Liquorice allsorts :). but I am very pleased (pics to come tomorrow).

And I have undertaken the final task for my 15mm ( as in painting them). The Spanish 15mm army started in 1997 with TTG figures (now battleline) and those Spanish figures are actually very very good. I also have Essex and some other ranges and they are all equally comparable. Today I based (for painting) 100 odd spanish (Line,Guard,Militia,Dragoons, Guns) and hopefully they will join the other 200 odd I have. Then the next problem will be the rules but until they are painted they wont be based. Hopefully the local RSA gamer secene get the 15mms going. I dont know how many iterations and rulesets this army has been designed for but each change has meant getting more figures (I'm a sucker for planning in advance)

My french however are a real "bastard" lot. They are the spawning of winning numerous EBAY and Trademe auctions and consist of Old Glory, Essex, Minifigs,lancashiregames,TTG\BL,AB and god knows what else. A wired mix of figures but I plan to try and get all the figure types into Division\Corps so that at least together they look uniform. While the TTG\BL figures are gnomish I actually dont mind them too much when they are all together. but when its mix amd match it looks like a freak show has come to 1812.

Below is a very old pic (2 years old) of the first 15mm Spanish I painted in 1997 for Shako. They are TTG\BattleLine figures and they match most other manufacturers that I have. Of course in 1997 the internet was a newish thing and Research on Spanish uniforms was on existant so the uniforms are a bit of a mess. 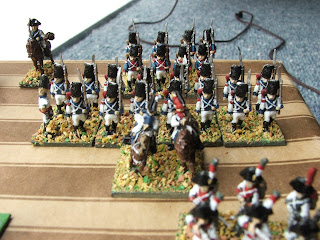 But I digress - this only starts when my Neopolitans are finished (and maybe the 92nd Foot, possibly the Russian Cuirrassiers and Dragoons, some more Prussian Militia and maybe even some Uhlans)
Posted by Jacko at 4:12 AM 2 comments:

Now Im quite an open and honest guy and I understand that figure manufacturers may have issues. Like the issues the Calpe Miniatures guy had with his vulcaniser which lead to some supply issues. Thats fair enough - he warned people about it and it was all above board.

I have dealt with many suppliers, Foundry\Front Rank\Caliver\Baccus\Old Glory\Victrix and they have been excellent. The small orders I have made form Foundry were dispatched the next day and the others were fairly the same. The lads at Victrix were excellent and helped me out when my nephew lost my instructions for the French Line - they sent me a pdf replacement via email. Teresa at Old Glory 25s is fantastic and my hats go off to most suppliers, Front Rank great, Redoubt great, Doug at MSC is fantastic.

All excellent except for Black Tree Design who are, quite frankly, the worst.. Dealing with this company is like shoving your head through a woodchipper only you have it turned off halfway through. I have had two orders take over 6 months to complete, the last order was made in August 09 and in Oct i recived half of the order. My attempts to get old of them have been wrought with failure and even though a call to the UK from old NZ all I get is "Oh yes we have it" and then nothing. It is damn April now and Im still waiting for my final figures (12 figures and a resin halftrack0. I have almost given up chasing them and am tempted to get my cousin to turn up at thier premises and ask WTF ? I do however recieve all their damn promotional emails yet any question in my order goes to the big loop hole in the sky.

Nothing erks me more than this.

To cheer myself up Im going to look at some 15mm AB french I have and maybe Ill paint some while Im doing the 28mms
Posted by Jacko at 12:44 AM No comments:

The small batch of Prussians are finished and I am happy with the result. Now I can organse getting the rest of them done (28 cav, 16 gun crew and maybe 150+ infantry). Currently I have 12 cav and 100 (5 Regt) odd infantry painted and when the rest are finished this should increases to 48 cavalry, 4 guns and 260 infantry ( 13 Regt)

Below are the Officer and a crewman of Prussian Foot Artillery. I quite like these figures and I quite like Prussians. It is odd how for 17 odd years I just ignored Prussians and Austrians and knew absolutely noting about them. I guess the Brits and French always got the limelight :) as I was guilty of the usual Napoleanic startup of Imperial Guard, lancers, Cuirrassiers etc.. 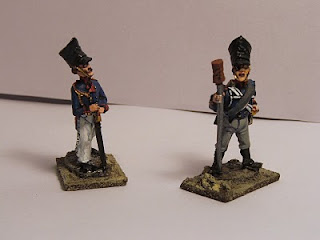 Another 2 crewman - the base paint I used is a Tamaiya weathering paint that has a mud effect. I then highlight it and next on the list is to flock and make pretty. 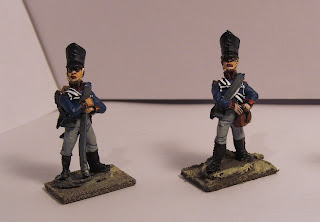 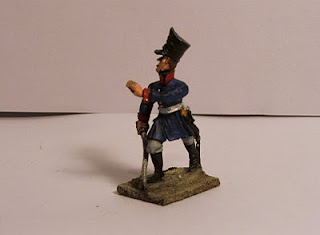 Above is my Neumark militia officer - for some reason I love low grade troops. They have that "working man" appeal and always offer a challenge. The last battle I had with Archduke Piccilo my militia held for two turns and then ran for the hills - its was quite fun really. However I still look back to that fateful day many many years ago when my Spanish miltia brigade gave some french a good stonking.

I beleive the model below is Blucher (Old Glory so a Prussian personality pack)so I will need to adjust his hair as he looks in his early 20's at the moment. I have also only undercoated the horse (I hate horses) but have picked up some tips so will hopefully improve on it. 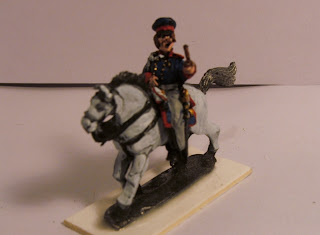 My Victrix Nepolitans have been undercoated - I forgot the tedium of all white uniiforms (Those 100 odd westphalians soon dissapeared into my memory) so have decided to paint some Russians at the same time. Doing 16 figures in one job - 8 Russe and 8 Naples. Started with command and the voltiguers just so the colour gets in there. I will mix things up with some campaign "non regulation items" to give some variety. When these are done it should give me a whopping 16 Infantry Regt as well as 12 Cavalry units eeek. 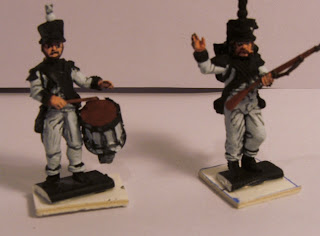 And the PavlovMusician and Line officer. The drummer is Foundry Figure while the Officer is Old Glory. They were base painted some time ago so I am going over existing work as the original was quite sloppy. I must have been drunk or something :). I have 60 Russian infantry already painted and when these are completed it will make 200 Odd infantry and 30 cav + Guns. 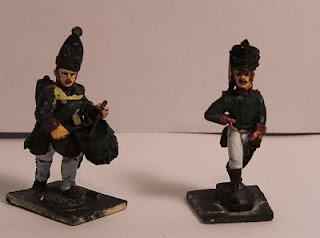 And behold ! The Destroyer of Worlds -- Arabella in her campaign uniform with Teddy insignia and light blue gaiters :) 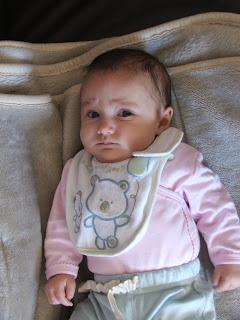 Its a nice sunny day, the baby just went to sleep and I ahve attempted to take some pictures from figures that are sitting on my WIP tray (which is quite a mess at the moment). 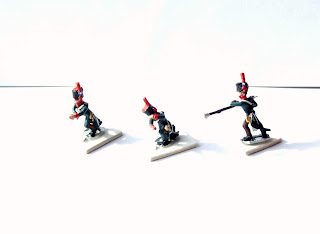 To the left are some 15mm Westphalian Horse Atrillery. Some creative licence was used in painting them but I have to say they are the best 15mm figures I have ever painted (I beleive the are Minifigs). My 15mm painted figures are slowly forming. 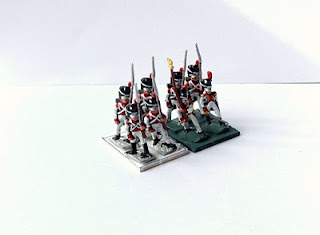 Above - More 15mm Minifigs,  this unit is the Westphalian Guard Grenadiers. It isnt the full unit but as I'm undecided on rules at the moment this will no doubt change.


Below are my 25mm Prussian Artillery (Old Glory) painted using the artmaster studio guide. They aren't finished yet but I think they look good. My job on the eyes needs tidying up though as some of them look like goldfish. Facings, buttons and final trim to go. 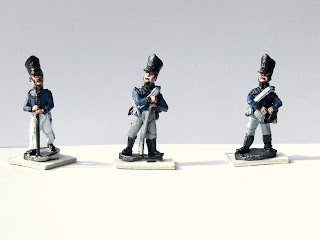 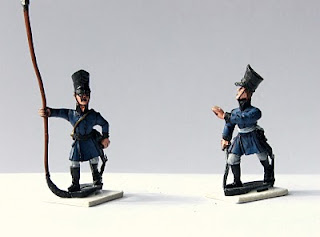 Two of the Militia command. base layers are done and I now need to finish off the facings etc. These will probably be from Neumark Militia troops. The figures are Old Glory. 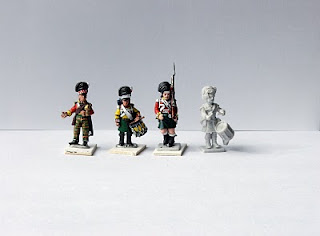 Some 28mm Highlanders. The three on the left are some half painted Foundry Officers while the drummer on the right is one from my Victrix Packet. Ill combine the figures as the look the same. But Im not looking forward to painting the tartan as I haven't done that in 20 years. They shall be the 92nd and I will have enough for a second unit but Im unsure which Regiment to use. 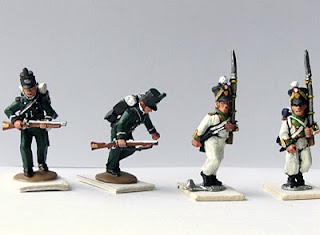 2 Plastic Perry Rifleman next to two "practice" 5th Italian Line infantry (foundry). I painted up a few just to see how they looked. The two line are foundry figures that I bought off ebay a long long time ago. I received the Riflemen with a copy of WI that I subscribed to a year ago. I quite like the white and green of the Italians and the Rifle figures were nice to paint but alas I dont have any more. 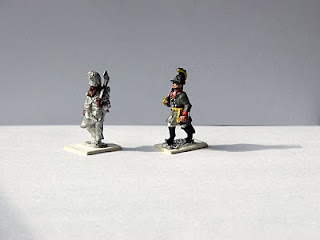 A foundry(I think) sapper and a unknown Austrian Officer (maybe Elite miniatures). I will create an Austrian Unit but I need to remember which one I planned. For so long I have played Ion's Austrians that I never ever considered an Austrian Army (Yes I started with the standard Brit and French) The Sapper will join my Italians I think. 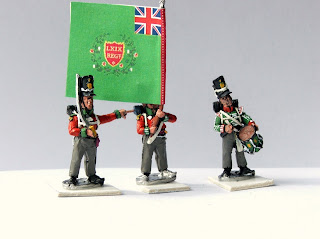 Some more old Glory 69th Foot (British). I already have the 33rd done, I just now need to finish this unit. I always paint the officers first to see how they look. 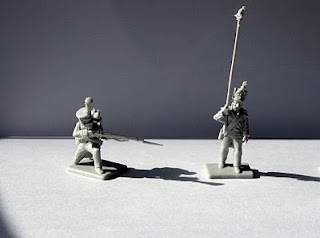 My Victrix French who will become the 7th Italian Line Regt. Very nice figures and fun to put together, however the bases they come on are the wierdest shapes and never fit "my" bases. So some pruning is needed but its plastic so its all so easy :). 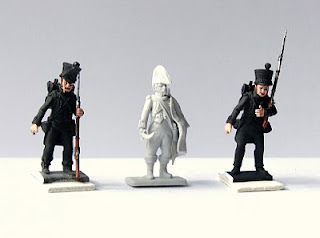 The 6th Neopolitans are started. These were the figs from my previous post. The were undercoated in black and then the faces and muskets painted (The officer is just to show the base colour). Hopefully they will look good and I can't wait to use them. You might tell from now my French Allied army is soleyl based on who had the most flamboyant uniforms !
Posted by Jacko at 3:01 AM 1 comment:

The New Dawn Of my Painting

Well maybe thats an overstatement :). With my rather large backpile of ead 25mm Natpoleonics and 28mm Plastics (perry and Victrix) and given my large French I thought in future I will try and paint my figures in the nest possible manner. My existing figures are OK but since I have gotten back into the hobby (2005) my painting style has gradually evolved into shading etc etc.

When trying to decide the best way to paint my Italians (using Victrix French) on the Victrix website I stumbled upon this walkthrough. http://www.victrixlimited.com/painting_guide_advanced.php.

So I have decided to follow that walkthrough at least for a couple of units so as I can see what the main differences are (well for one I have never painted eyes :( ). SO the next photo is a very bad one but this is the start of the process. Figures have been undercoated black and the base shades painted on the face (and even eyes - THEY EYES THE EYES!!!) - the standard bearer and officer were from my old style but luckily were only half finished. 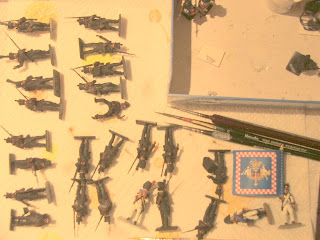 So I will be painting a 24 Figure Neopolitan Line Regiment, a Prussian Gun crew, Blucher and some Victrix Highlanders to see how they turn out.