A very slow month for me due to a busy life, work and other interests that do not leave much motivation or time to partake in  painting or modelling. I did have a spurt of activity that I do need to finish off that I will leave for a subsequent blog post. Ideally in one month after a conference and busy work time I can finally get back into painting again.

Though, I have managed to visit Archduke Piccolo's for a few chinwag sessions and last night we played a few games of Memoir44 to wet my appetite. Archduke picked up the main rules at the swap meet and I picked up the Eastern Front expansion pack last week so it was time to have a game (Archduke has played solo).

The first scenario we tried was Hill 307 I recall. I played the Axis and Archduke the Allies and the game was a bit of a blood bath but my German troops did manage to puncture the US lines and seize the objective.  US Air power was not enough to save the position but did a lot of damage on the Panzers. 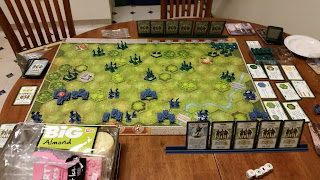 The next game was the "Gates of Berlin" with Archduke as the Soviets and myself as the Axis Panzer Army. 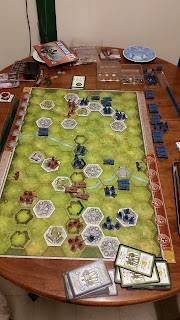 It was a hard fought and bloody contest. Soviet artillery poured fire onto tanks and I took heavy losses though finally forcing the central Soviet line to fail. A quick Panzer thrust captured the bridge and ended the game thought the Germans were in no state to hold the position or keep fighting.

Below - Panzer Casualties mount as we get close to the soviet lines. 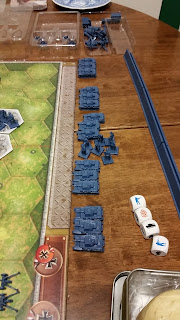 Very entertaining evening of games, tea and coconut slice. Just the little spark needed to prompt me to get the Romanians sorted.