So in my last update I decided to repaint some broken 28mm French Cuiraissiers that are 18 years old, I started by giving them a black wash and used the officer figure to test my "repair. When I was doing this I thought it would be a great idea to fix my other 25mm Westphalian Cuirassier unit (The 1st)(Redoubt) AND paint some 15mm AB Cuirassiers, aswell as finish some AB lancers at the same time. Below are the FR boys, washed and some darker shading done, so far have done faces and the red areas - great figures to paint. 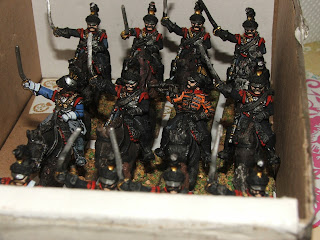 The 25mm Redoubt figures, they are ugly but I am fond of them as I got them in a sale of a Store that closed down and I do like the White uniforms. Horrible to paint, poor castings but usually they scrub up well. im also doing my French ADC's (as I found them in the box) 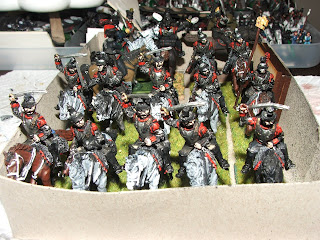 After these are done, the next units to hit the repair line are all  the Dragoons, 2 FR units, 1 1/4 painted Perry plastic Dragoons, 1 AB Dragoon unit. The the Westphalian Line infantry (2 units)  and 2 Jaeger. After that the French should be semi back to normal.
The current madness of the painting tray, it really is a mess at the moment, AB Cuirassiers being painted (Shading and some red done), surrounded by all manner of figures, Landwher, SYW Brits, M3 Shermans and some Mahdists. 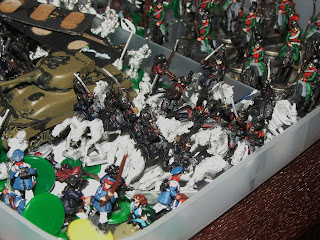 The AB lancers are coming along just nicely, the zulus behind them are turning into a bit of a train wreck, I cant simply get the shields right. 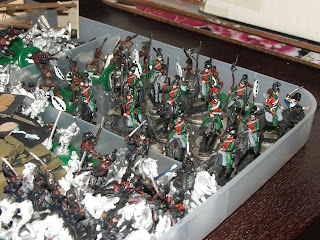 So you'd think I have enough to do already as I have the following unpainted figures
i) About a 600 15mm Prussians, 300 15mm french, 100 28mm Russians, 300 28mm Prussians, 150 28mm British aswell as finish my Mahdists for mabutuland aswell as 1/72 ACW, 1/72 SYW and (somewhere 1/72nd ww2 8th Army).
Last friday I swore that the 15mm British Sudan figures would be my last army to buy and that I had everything I need for all other periods. However after a conversation with a mate in the Bealey Ave median strip at about 11pm on Saturday night, followed by a beer at the Casino I now have a 6mm ACW union army winging its way to me from baccus, my second Baccus 6mm Army in one year, as I sold the last ones (unopened) seeing that I had it for a year and never touched it. But this time things are looking up for 6mm :)
I need a bigger house !
Posted by Jacko at 3:09 AM 2 comments: 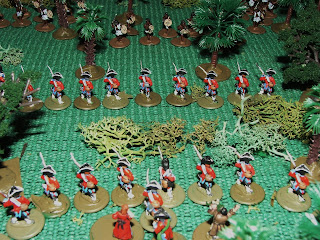 Currently I am focusing on my Mabutu campaign, and I have just completed my first skirmish which I will post to the Mabutu Blog, I then rolled the events dice and have another skirmish to resolve, albeit a little smaller but at least now I have everything ready.

As part of this I am painting a variety of 15mm Figures (Zulus, Ansars etc) for the campaign but also as I want to do a solo Sudan fight later in the year. I'm quite enjoying the 15mm side of things, easy to pack away, fits on the kitchen table OK and fits the rules OK (For TS&TF I use cm instead of inches) and plan to do some more when I get the time.

I was in the garage and started to sort out my 28mm Napoleonic, they have remained in a big heap since the earthquake and I felt motivated enough to put them back in the boxes and set a plan for repairing them. The Allies survived, but the French had a torrid time as the ended up upside down and all manner of broken bases and bayonets. So I have decided to take one unit out at a time, retouch them paint wise and to re base them (as a lot of come off bases) in some consistent manner. So I then found the first 4 lead units I ever purchased, 2 Front Rank Dragoon, 1 FR Cuirassier and 1 Hotspur Chasseur and its odd that I have never completed the Front Rank figures in 18 years, most are painted but the horses never were. So I pulled out the Cuirassiers and will tidy them up first, hopefully some pictures to come.

The Rugby World cup has started so my time has been slashed as I'm watching all the games and only focusing on getting my Mabutu figures setup. I have completed the British forces for the first skirmish, and the Zulus and Ansars have arrived for the natives so I am currently painting some Mahdists to act as Mbeechi while the Zulus will stand in for angry Mabutans. I'll do another Mabutu Diary update tomorrow and then next week I should be able to fight the first skirmish. I was going to use Sharp practice for the rules but I ahve migrated to TS&TF Africa variant as I think that reflects things a little better.

I have also been picing up various terrain pieces from around the world. Why pay $30 for 3 palm trees in NZ when I can buy 40 for $10 from Hong Kong on ebay as well as using Fish tank grass as jungle bushes. At the end of the day it will all look a little "plastic" but Im not fussed as it will be on the kitchen table anyway. I have completed the pallisade wall in case the natives get a bit rowdy at the garrison.

So what has been happening since last week ? A lot. I've been busy painting figures for my Mabutu solo campaign. tidying up some loose ends and waiting the verdict of the EQC. I recently acquired a tonne of Old Glory 15mm Prussians and I grabbed the Landwher out to give them a try. I have base coated the figures and am currently about to do some tidy up and highlighting. I quite like them, which is good as I have 8 battalions to complete, however this is a long term project and not something I need to complete in the next 6 months at least.

I also grabbed a Polish officer to see how he ended up looking, I have 2 units to paint and I have them "earmarked" as next on the list. I have never painted Poles before and am quite looking forward to it, hopefully I will do them justice. 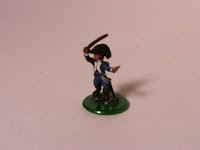 And I have finally completed two units, and even made an attempt as basing them with some shading. I have had Old Glory Guard Chassuers in a bag for an age now and I decided to paint up one unit after doing the refight at Waterloo in June. And here is the finished product, a lot I can improve upon but I have to say I thoroughly enjoyed painting these figures up in their Fantastic uniforms. I will probably never get to use them, but I just could not resist., however I do have another 36 of them who will all become Hussars of some type. 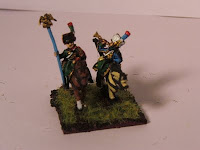 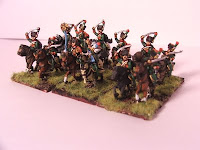 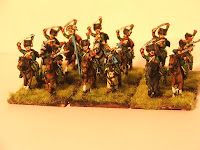 At the same time I was working on the Chassuers, I also started the 2nd Hussars (AB Figures). I have always been shy of hussars so I thought I'd give them a go  and I am pleased with them but they need some varnish and an odd touch up (I dont know what it is but when I go to take photos I seem to drop every figure I touch). Again I am happy with my work, though a lot of lacing is horrible for me and this I need to practice on. 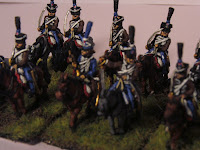 Next on the list of french are the 6th lancers, AB figures again and very very very tasty looking figures. Im quite happy that I had a little purchase in June, and excited at the fact I still have another 4 AB Cavalry units to complete (Dragoons, Cuirrassiers, Horse Grenadiers and Carabiniers). Currently they are undercoated and ready for smoe decent painting.

My solo campaign is underway slowly due to the need to paint the figures, I thought I'd do the first few moves slowly so that I have time to paint the natives. Any day now I should recieve an order that contains a horde of Zulu and Dervishes and once they arrive its full steam ahead.

Below is my Jaxonian engineer and the two cooks (African skins tones arent my best in 28mm, let alone 15mm). 15mm Peter Pig figures (Engineer is a "Govt Captain" from pirates range and Workers are AWI ranges) and based on plastic counters from Whitcoulls (3 dollars for 50 lol).

Below are my old 7YW British I painted in 2000. I lived a stones throw away from Essex miniatures and used to pop down on the odd day, have a pub lunch, pint and purchase ;). These figures will take the roll as my Jaxonians (Less the Colours). Below is a selection of the men who will soon be up to thier eyes in sharp pointy sticks. 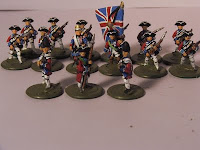 Next are the 15mm Peter Pig Pirates. I bought these as I want to run some smuggler games and for them to fill in as Spanish Guerrillas in the Campaign if needed. They will also fill the role of White Slavers\Settlers in the Mabutu actions. I really like the figures, which is good as I have 50 of them, a good mix of Cutlass, pistols, Muskets and "mob" weapons. 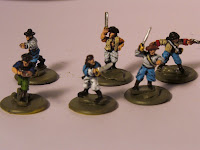