I actually finished some units in the last few days which has been a good morale boost. I seem to have gone for so long without actually completing anything that I found myself preferring to read books or play computer games.

So to inspire myself I pulled out 24 Hat Saxons and promptly painted them as Spanish Infantry. I have toyed with creating a small force of 1/72 Figures in order to try Big Battles \ Small tables for the Peninsular war. I have the figures already and they are lighter than my 28mm horde so would fit nicely in a box and can play on my "table" (which is a bed). I have enough Spanish, French and English to re-fight any battle but they just need painting.

At the time the HAT Spanish were not available so I purchased the Saxon's to fill in and they do a reasonable job if one does not look too closely.

I also has two days off sick last week due to a heavy cold so I was able to finish the basing on my completed WSS Unit. I am glad I finished them but pretty unhappy with the unit as a whole due to a series of mistakes I made since putting them together. Its an imagination unit of the Rechburgian army, the rest of my figures will be French. 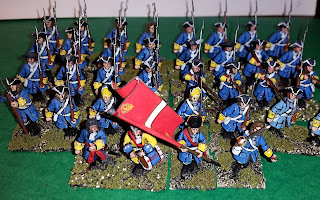