A quick post as I have finally based two units of my plastic 1/72 French Army.

Below is Inf Regt, 100 better known al Lally's Regt. I think I started painting the 4 years ago and they have finally been based. The uniform I have done is completely wrong of course as when I painted them they were an "Imaginations" unit so I simply found a French unit that I like the Flag of (The Irish Regts mostly had red uniforms). I simply painted the flag on the figure and have yet to add the 3 corner Crowns as the first corner was a simple test as to how it looked. 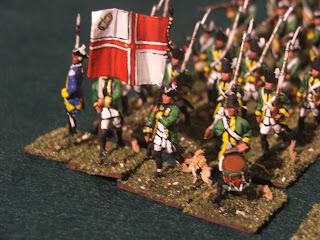 And the next unit IR29 or the Bourbon Regt with lovely white coats. These were undercoated in white GW primer, washed in black and then painted . There is always something appealing about plastic figures, basic, light, varied and of course cheap. 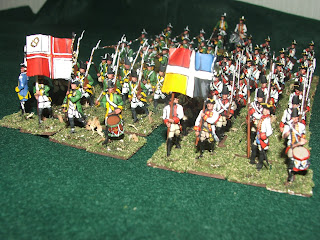 So looking at my available figures I have the following to complete:
2 Grenadier Units
3 Infantry
1 Light Infantry
4 Milita\Guerilla \Angry Townpeople.
3 Cavalry
4 Battery of guns

On Monday evening as I was putting the bins out I remembered that I had some plastic sprues that I had promised to Archduke Piccolo (http://archdukepiccolo.blogspot.co.nz/). So a phone call later I had arranged a visit to the Archduke's home on Tuesday night. Often when you enter Chateau Piccollo you can't help but be motivated by the hosts enthusiasm and creativity for wargames.

After seeing the scratchbuilt naval forces(http://archdukepiccolo.blogspot.co.nz/2012/02/more-on-naval-warfare-in-jonos-world.html) I was very tempted to try some of mine, seeing that I had everything necessary to make them.

So yesterday I knocked up the following three ships in around half an hour, and as I painted some SYW 1/72 I threw some paint on them to see how they looked. Two cruisers and a (carrier of sorts) - all based on ice cream sticks and made out of Eraser, glue gun sticks and bits of sprue. They were thrown together rather quickly and the paint job was very fast just to add some colour but a good test run if i wanted to create some more. Out of scale of course as that front turrent looks like it houses a

Karl-Gerät ! and drastically out of balance. 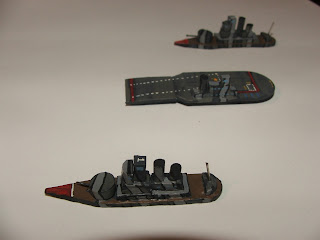 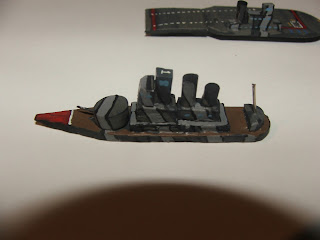 The carrier "Reluctant" and I'm very tempted to make some Swordfish to go with it. 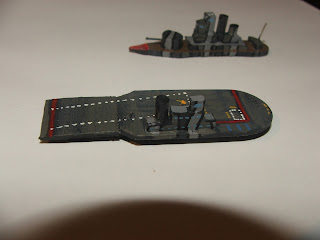 Look at those guns ! 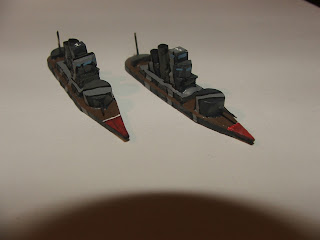 And my French SYW 1/72 figures. Bourbon Infanterie (IR 39), the paint job is unhistorical seeings its the first French of this period I have ever painted but I really like the look of them - Very tempted to go find that box of Front Rank French and Indian war figures I have ! 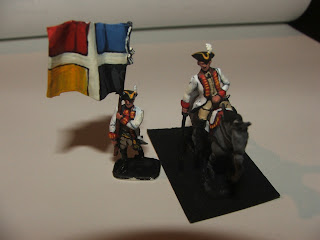 So finally some action on the camera front and on my painting table, I went to get my "plastics" box out and I found a Imagiations unit on top. So here they are - a yet to be named battalion. I've decided to paint the rest of the figures as they were intended, AWI as Im interested in that period and didnt see a reason why I needed to do it in 15mm. 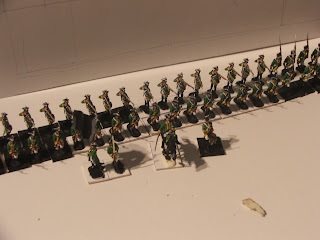 On to the Confederate Plastics, First off the rank was some CSA Italeri  Artillery crew, very crisp figures to paint much like all Italeri sets. 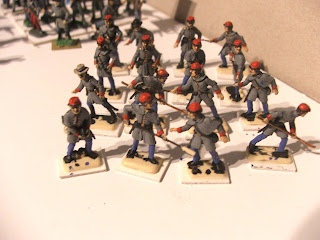 The first of the new Italeri battalions. I purchased the figures in 2006 and have only gotten around to sorting them out properly. 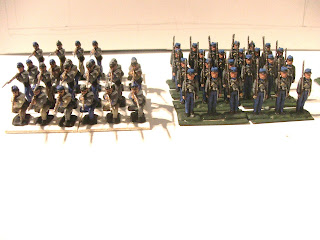 And a blast from the past. One of the second generation battalions I purchased in 1998 from Revell 9I think) to complement my ESCI forces. They still bear the original paint jobs and I have no intention of touching them up, these figures bring back some great teenage memories of game after game against Ion. 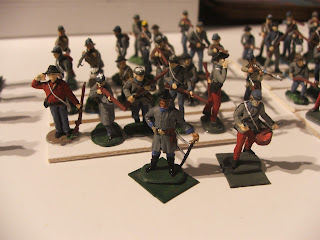 And even older. The original CSA army painted when I was between the ages of 13 and 16 (23 odd years ago). Mostly Esci figures, shame they are OOP but they did good things for 1/72 wargaming. I have re based them but again I wont touch the paint job, they have held up well through the 3 decades they have sat in a box. 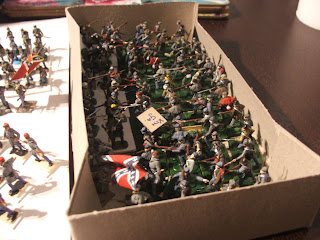 Some handpainted flags from a newer set, I think Ive done rather well on these, I typically don't like moulded flags (They are usually tiny !) but these I like as they seem a good size. 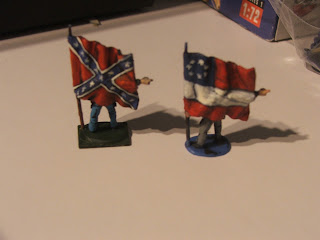 The rest of the Italeri figures in various stages of finishing and a final Esci unit that needs some new bases. 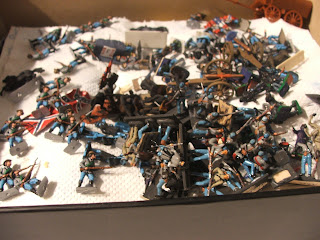 And my most recent arrival courtesy of Richard Shields, a swag bag of Airfix ACW artillery, 16 guns and all the crew. Such classic figures so I thought it prudent to start my Union forces off with a classic unit. 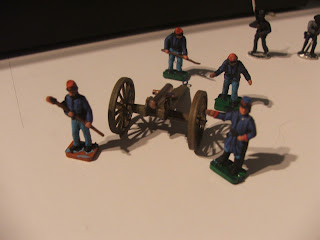 My laptop was caught in a crossfire between user silliness and a 2 year old temper tantrum. I still don't understand how said user managed to corrupt windows when they were trying to load trademe via internet explorer but then again females are odd sometimes.

Never fear I have restored it to factory settings but its has taken me an age to restore all my goodies onto it. Will post some pics of what I have been up to soon, apart from painting 1/72 plastic ACW and AWI figures I have been on holiday AND sick at the same time.