Not much was going to happen as I was supposed to in Los Angeles however thanks to the inept nature of the airline Qantas, I got to stay in shakey Christchurch. There was a small silver lining in all of this, Colin was hosting a Waterloo refight at his place in Waikuku. Colin's house is like a wargames retreats as it is;

i) Outside of ChCh which is rather depressing at the moment. It also has a functioning toilet which for those of us in Chemical toilet land is a very valuable commodity.
ii) Has a large table
iii) Is always a very enjoyable day out with an excellent group of wargamers.
iv) Has dodgy mobile coverage, which (if you want it to be) is a usefull shield against unwanted calls.

The lads had spent the weekend before setting up and here are the pictures of that setup. Due to troop numbers is is scaled down somewhat, a Corp becoming a VLE Division and due to scenery some of the built up areas not being of true size, however if you want to refight Waterloo you cant be picky.

Below the British right wing is being deployed behind Hougoumont, while the French coluns eye it up from the other side. 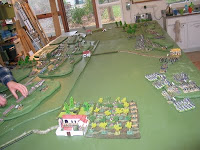 The scene from behind the British wing and of the excellent long table. 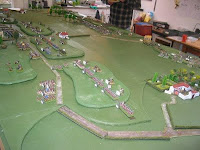 Hopefully soon we will see some updated pics of the actual game.

Silver lining No 2 of my aborted Qantas jaunt was that I recived refunds for all my expenses and have just had a cash injection into my backaccount of a few grand. This has lead to several cash outflows, one to AB Miniatures (Eureka) and one to another supplier to get some 15mm flags. There will be a third and final cash outflow to OldGlory for another 15mm army - I beleive it will be Prussians and not Austrians as I don't want to paint any more white uniforms after doing the Spanish. Though I am tempted by some Russians, Im not sure yet.
Posted by Jacko at 7:08 PM 2 comments:

I have finished the Malaga Regt repaint and glued it to new bases this morning. Overall I am quite happy at how they turned out given the age and quality of the initial paintjob, while its still a little off in places they look ahell of a lot better than what they did.

All I need to do now is add new flags and make the bases pretty.

Next unit to be done is Spanish Guards in blue uniforms and Bicornes. 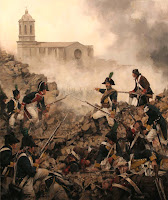 Oh those Spanish troops - aren't they pretty and dashing !

25 Figures broken\crushed beyound usefulness _ it will be easier on my sanity to simply buy replacements than to try and repair.

49 elements of infantry (196 figures) need to be rebased and have the odd minor repair (Mostly command elements).

So I have taken this as an opportunity to repaint them and then rebase them. As these were painted 15-20 years ago they are simple one slap of paint jobbies when my Wargaming production line was geared towards quantity instead of quality. So Ill start with a good blackwash and then put in the highlights, new standards and new bases. This time I'll actually make an effort basing them instead of my usual green paint, PVA, flock routine I do.

The first unit on the Worskshop is a Grenadier unit (The picture is old) and I plan to make these look a lot sharper and based on an actual unit, probably the Malaga Infantry Regiment. 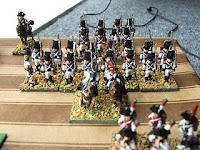