Some years ago I found a rather cheap source of trees from China, so in true form I purchased a number of them. In hindsight they are cheap and BRIGHT, especially the fruit trees but they are slowly growing on me  .........over time. I need to base them up, as I need trees so I was thinking maybe spraying them with a little dark green to tone them down. 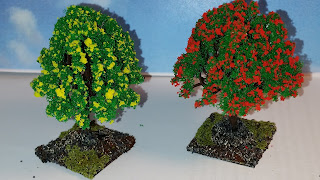 Speaking of bright colours - I am also pottering around with my old Minifig Guard units. I recently picked uo some spare figures to replace some losses and recently painted them up. However, the close up photo has me hissing as they look rough at guts. Lovely colours though, I really like the blue, green and reds I use these days (Vallejo and Citadel). 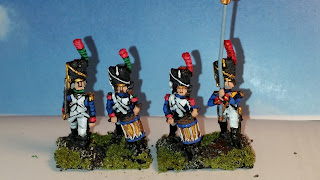 I did think of replacing them with new plastics but considering my army is made up of Hinchcliffe, Hotspur, Front Rank, Perry and Redoubt then I guess they fit in well enough ! Looking at the closeups I am amazed at some of the horrid lines and blotches, though I have started wearing glasses for driving I wonder if I need them for every day things (Or just better light).
Posted by Jacko at 2:54 AM 3 comments:

So after years of taking poor photographs with  bad lighting and background, the power of google has me testing some methods of improving my pictures.

First up is the sky background (I forgot the scenic base but oh well).

I purchased some Elven Knights from 15mm.co.uk and painted them last week. Three Stands for Hordes\RRTK (none of my army lists have Elven Cavalry but I'll make something up as I go). I still have not mastered the art of armour, which is why my Mantic 28m Elven army is not moving very far (I suspect I might have to try this dipping method). 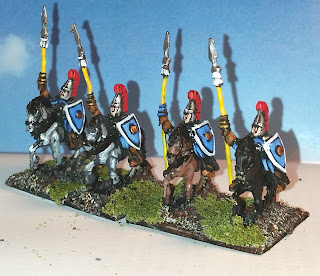 I also needed some bigger Orcs to act as Fanatic\Heavy Orc infantry. 15mm.co.uk came to the rescue again with some large chaps that I tried to make black and evil looking. The photos however have me thinking they might need a little highlight here and there, plus some red or yellow eyes will go down quite well. I think they need that "We are nasty people *gnash gnash*" look, at the moment they look too bland.

Over the weekend I shall make a little photo box with a proper set up (The sky background kept falling over).

So since my last epic adventure to Australia, I have been in Australia two more times in the last month or so. The novelty has worn off however my last trip was a holiday and this was very relaxing ,well deserved and I have returned motivated and keen to get myself back into it. I would be motivated to not work at all, sit in the sun and be a gentleman of leisure but somehow I believe my finances would disagree with me.

I started with organizing myself a little bit more and slowly getting some painting done, with  longer time being spent each week.At the moment I am now up to roughly three nights a week for about an hour which, compared to several years ago is not a lot I am finding it helping my productivity.

This all began since I have been watching a youtube channel of lindybeige.

A video entitled "Crap movie archery" (ha ha) was linked on the NZ wargamers forum and since then I have watched most of this person's channel and have found it thoroughly entertaining and knowledgeable. I know very little about ancient history, weapons and clothing so it has been very useful.  Of course I do not take every word he says as a definitive authority but it is quite evident "Lindy" is knowledgeable and humorous at the same time.

In a rare gaming event last night Mark and I managed to play a small Napoleonic game based around an 1809 French attack on some Austrians.I shall make another post on this game but needless to say French dash saved the day and left the Austrians gnashing their teeth on the way back to Vienna (Actually the Austrians stalled at crucial times while French infantry, that should have died several times over hung on for dear life !).

Below - Davout's Division surges into the French Centre, avoiding anything to do with large stone buildings. 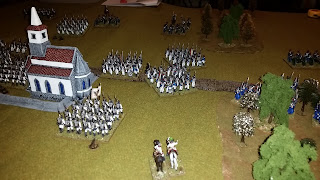 For some reason, blogger won't let me post a hyperlink very well so Mark (Chasseur) blog is at http://chasseuracheval.blogspot.co.nz/.