Work and a family illness have meant my time has been spent in other places or my mind at least. I've been working a lot recently in my spare time plus I was in Melbourne so I spent a night painting figures last night and I am all the better for it.

More work on my French for Waterloo. I need to do another 4 or 5 units in 6 weeks. 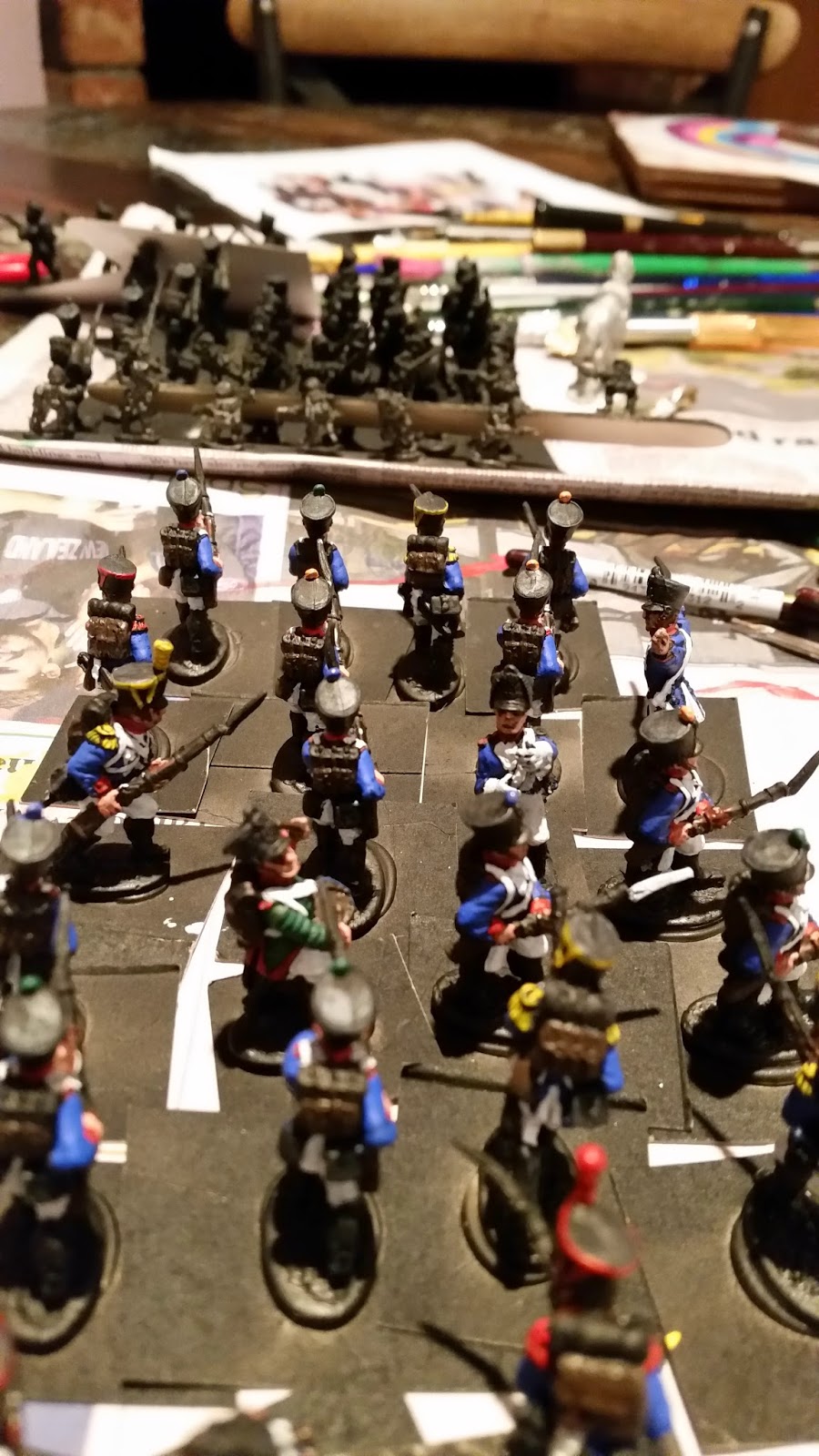 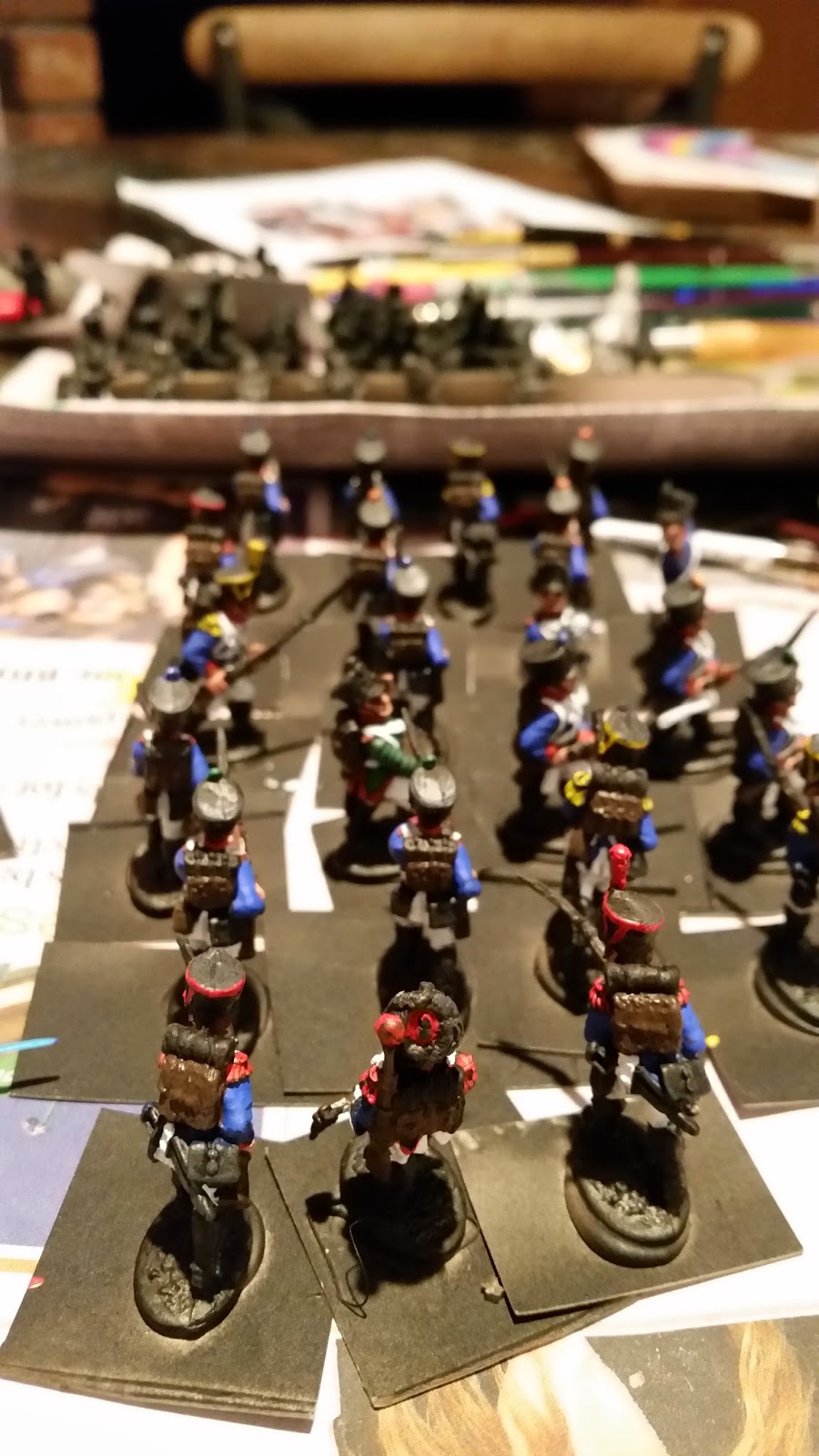 I also picked up some HAT 28mm Light infantry to bolster my forces for Waterloo. 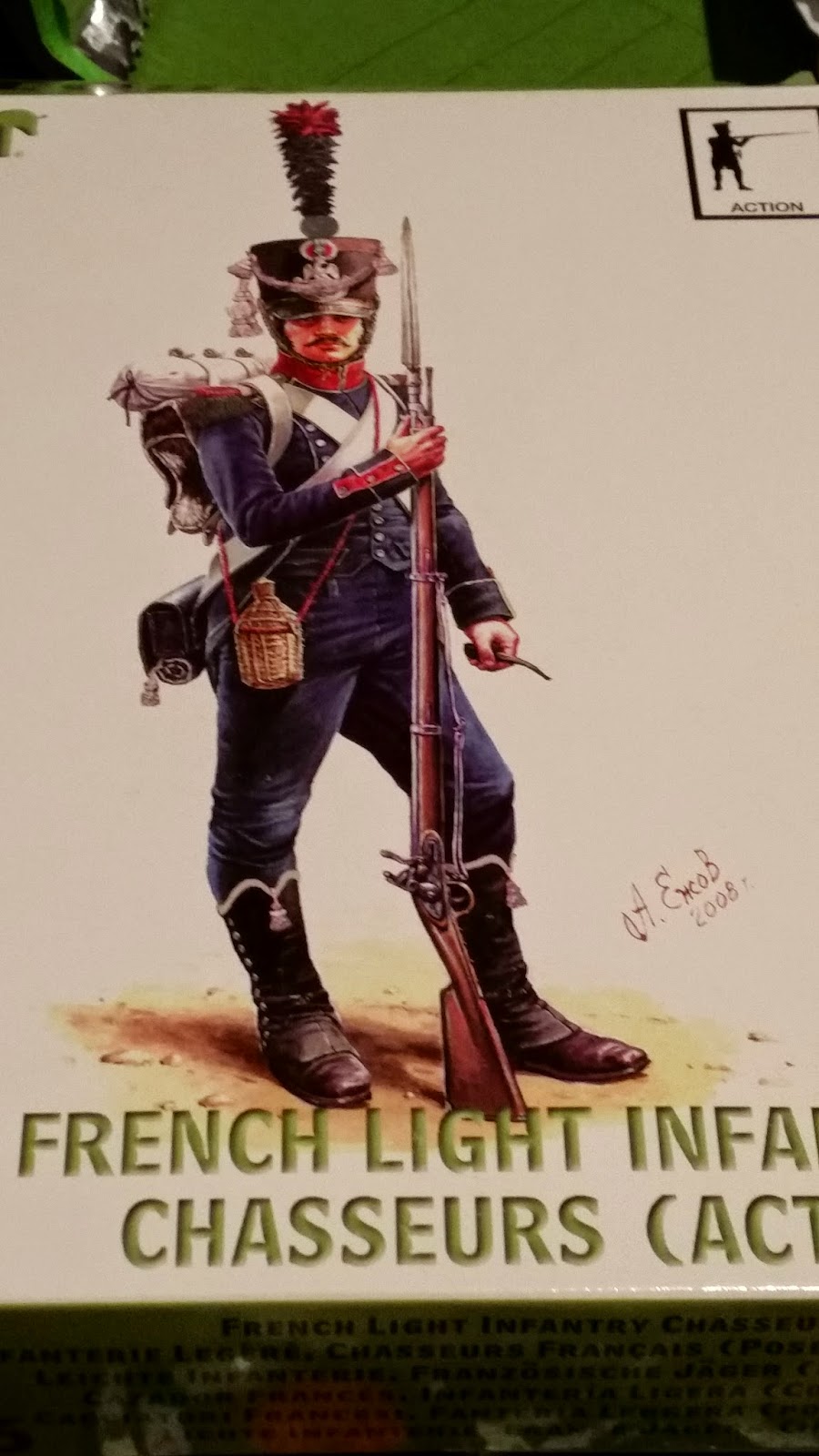 They are tall but slender figures - they match Hinchliffe well for size but not Front Rank. I have started painting a test figure - he is half done currently. They will make excellent Light troops for Waterloo ! 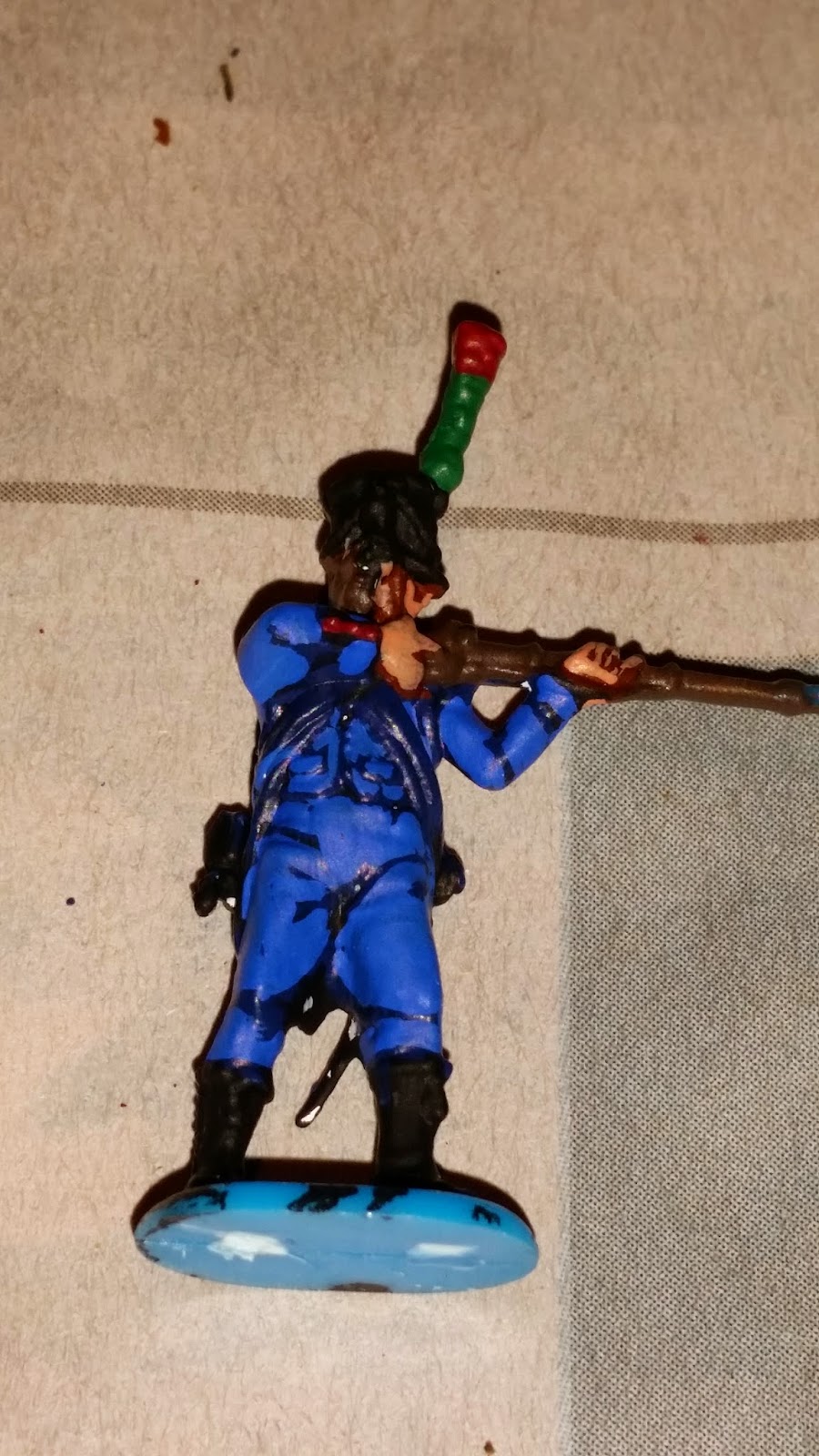 Several great Hobby shops in Melbourne stacked with loads of figures that are hard to get here in NZ. Was a great experience !
Posted by Jacko at 7:53 PM 3 comments:


Tonight I decided to play a game - A WW2 skirmish in 15mm. Two hour Wargames Ruleset Nuts comes with some introductory missions to help you get used to the rules. So I played the first mission - 4 US Paras attempting to take a farmhouse from some German Infantry. The US leader was my "Star" (ie: Its me !) while the Germans were lead by a Veteran NCO.

After knocking all the papers and figures off the table Snowcat enjoys the heat from the fire. 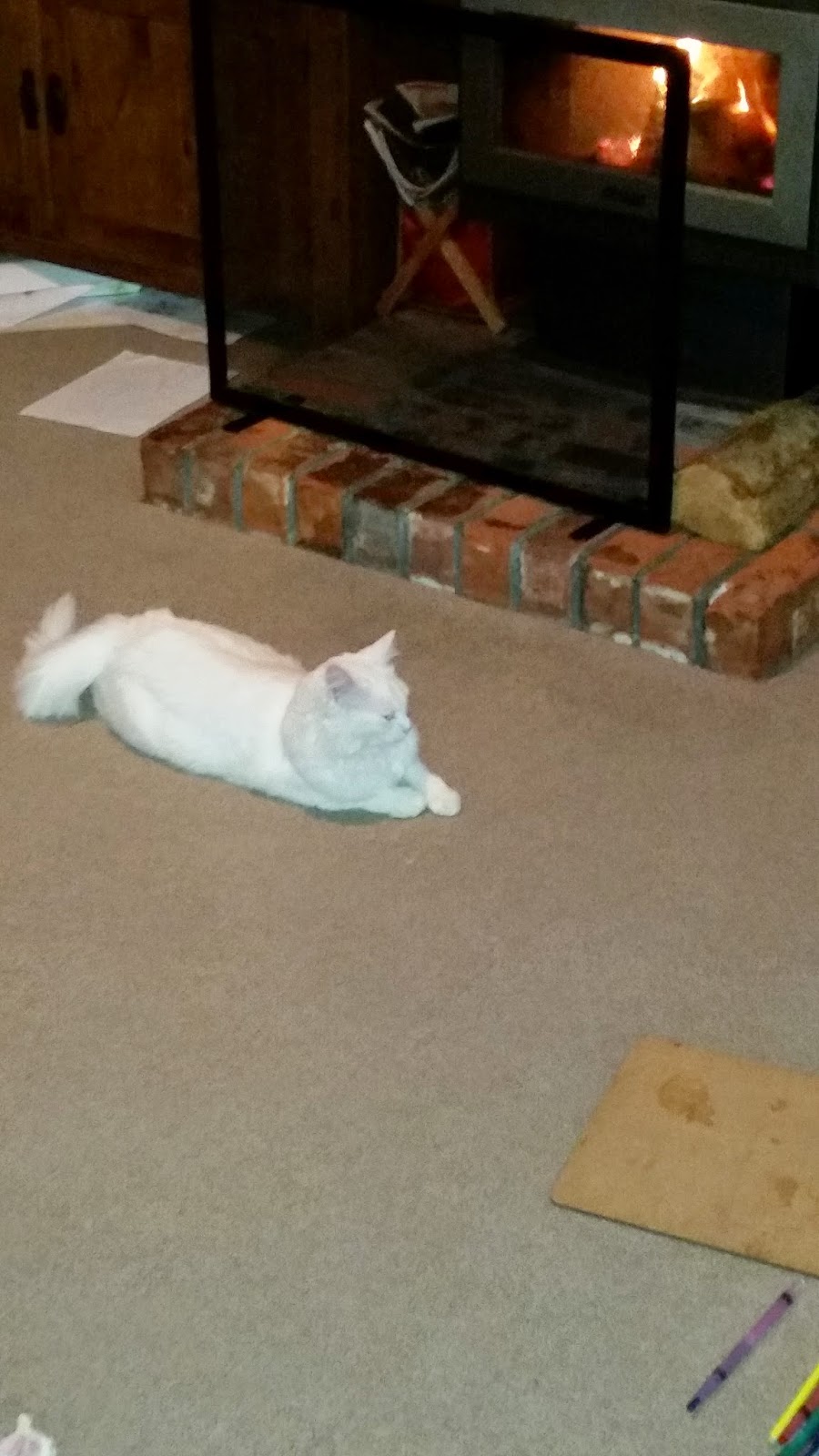 After catzilla struck I then set up the table a second time. For this game I changed the scale from inches to centimeters. Below is the area - 40 x 40 cm, two woods (Cover), a house, some hedge and my old bocage. (I had the wrong box of cheap chinese trees so the bases are white) 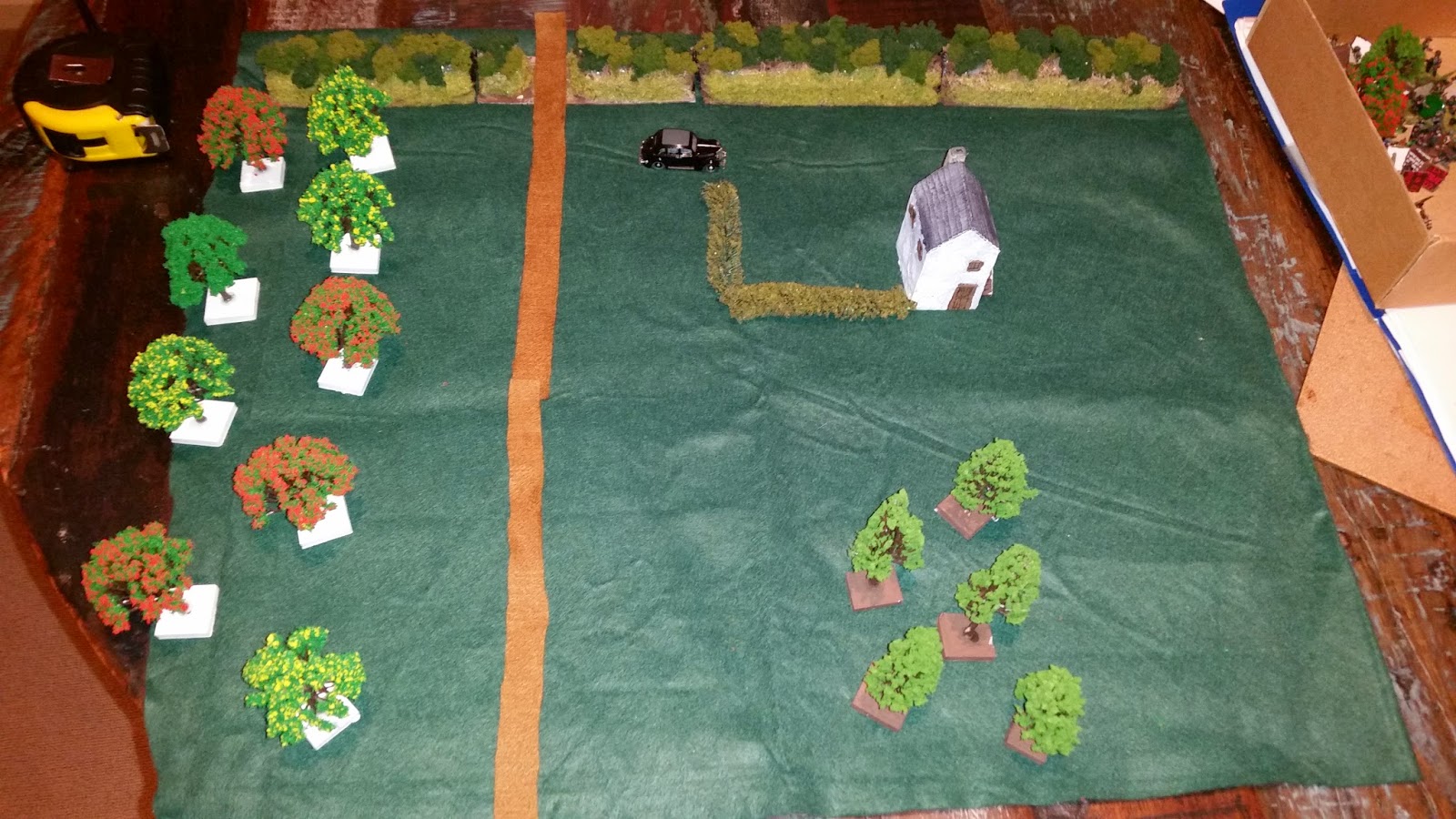 The US - Lt Jimmy Cotton with Privates Able, Baker and Charlie. 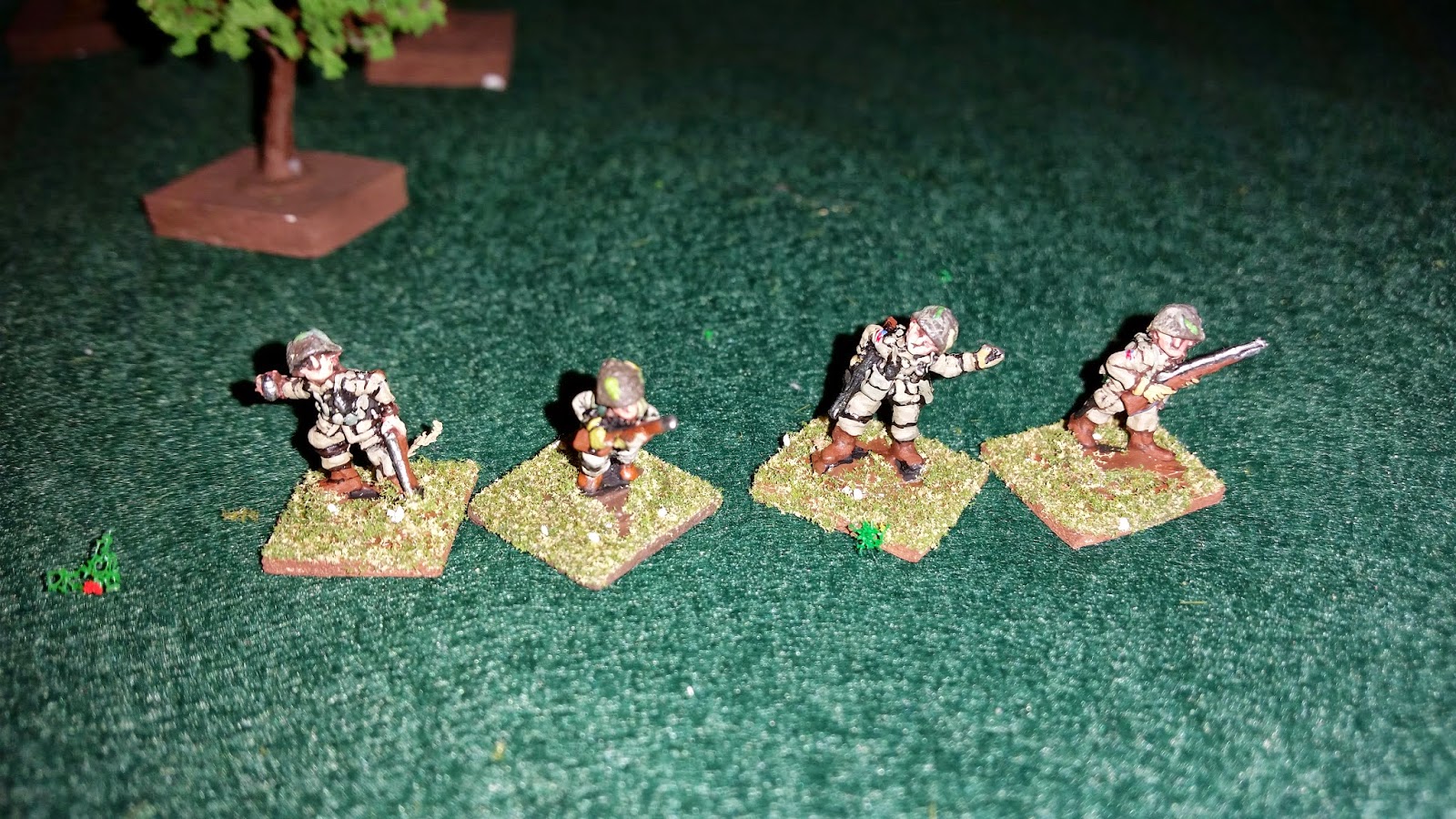 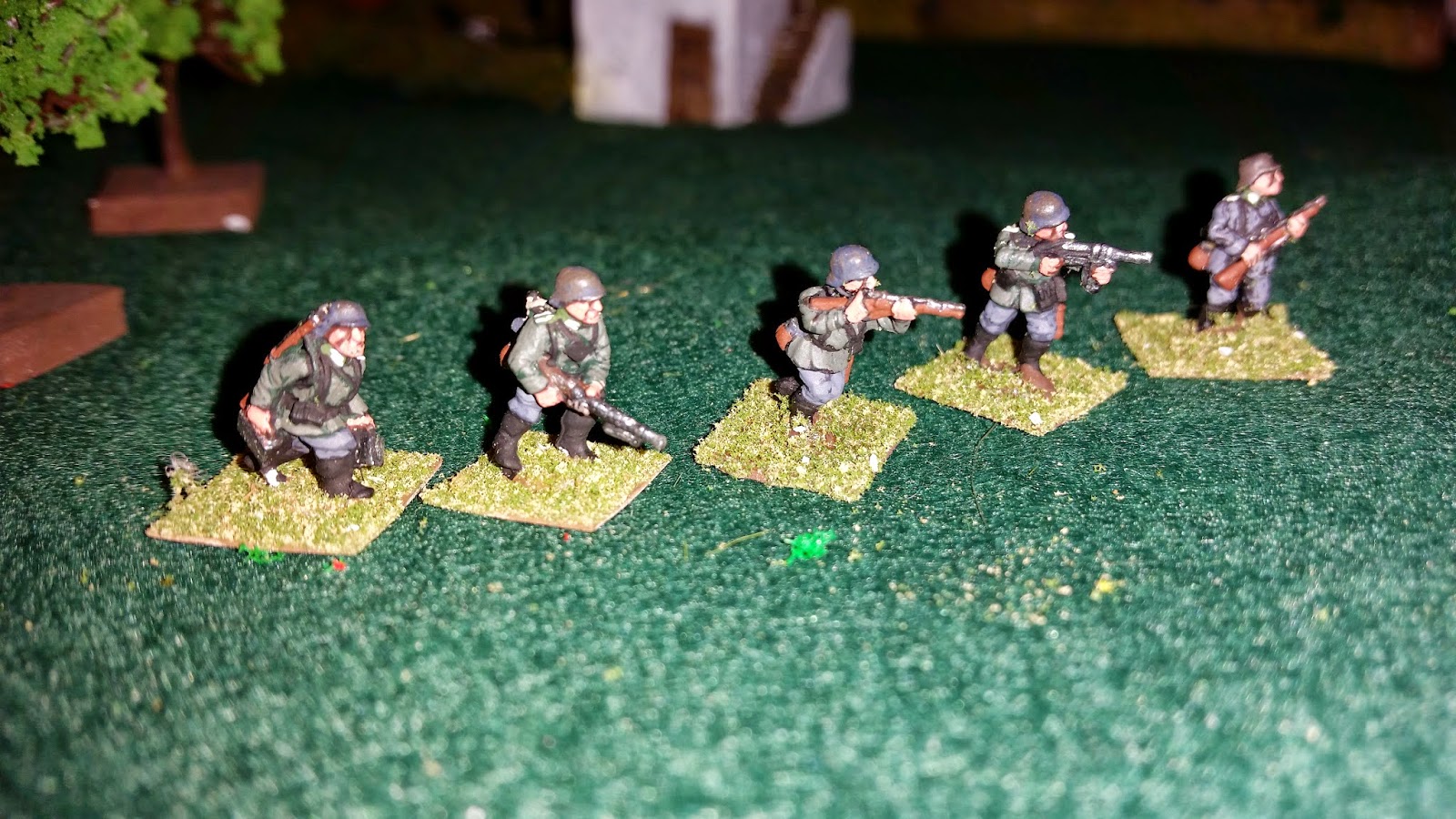 The cast from Allo Allo also arrived in for a photo opportunity. 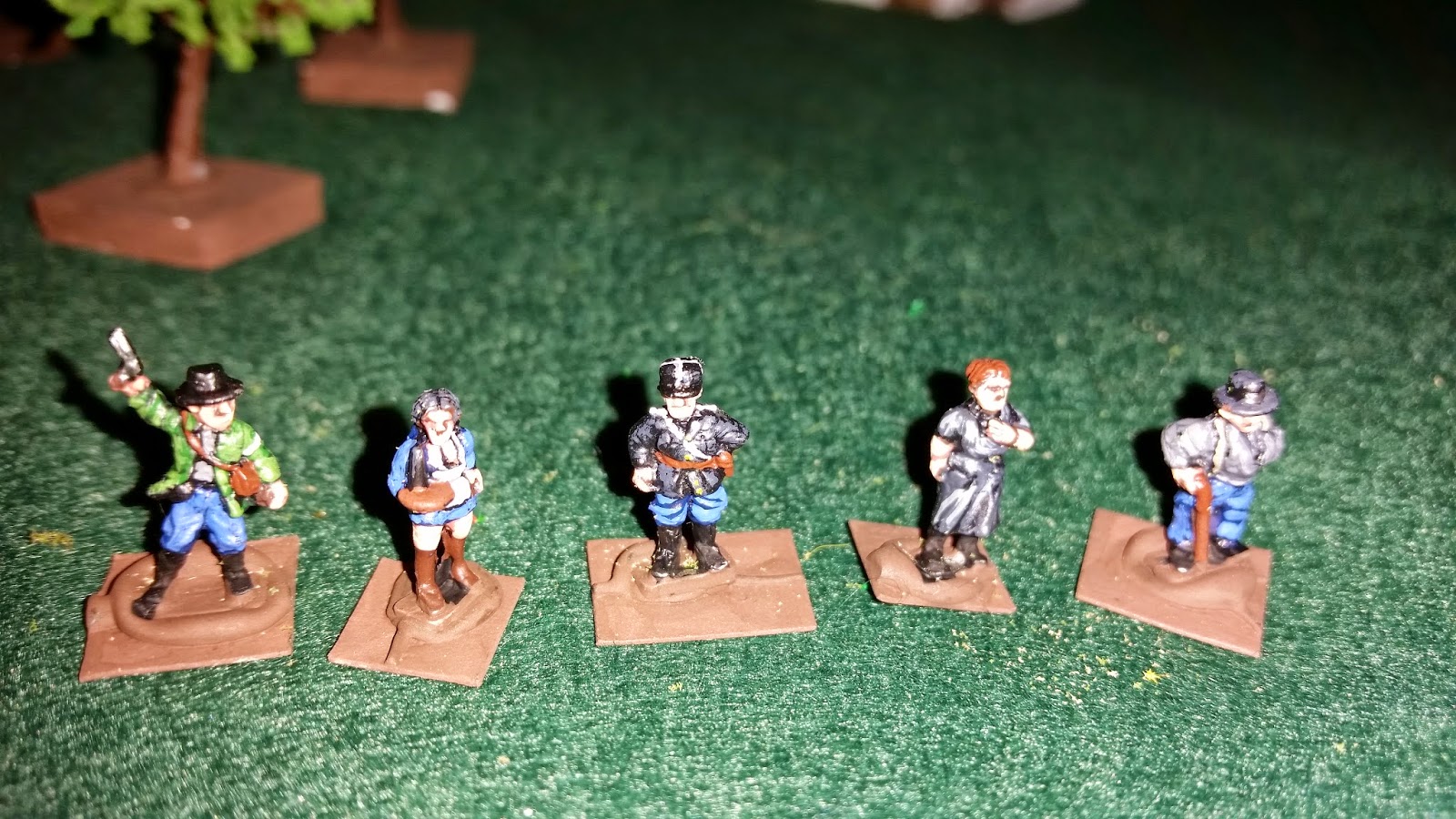 The setup - US Paras make the tree line while German Sentries wander about the farm. The rest of the German squad are *somewhere* that will be determined on the first shot. 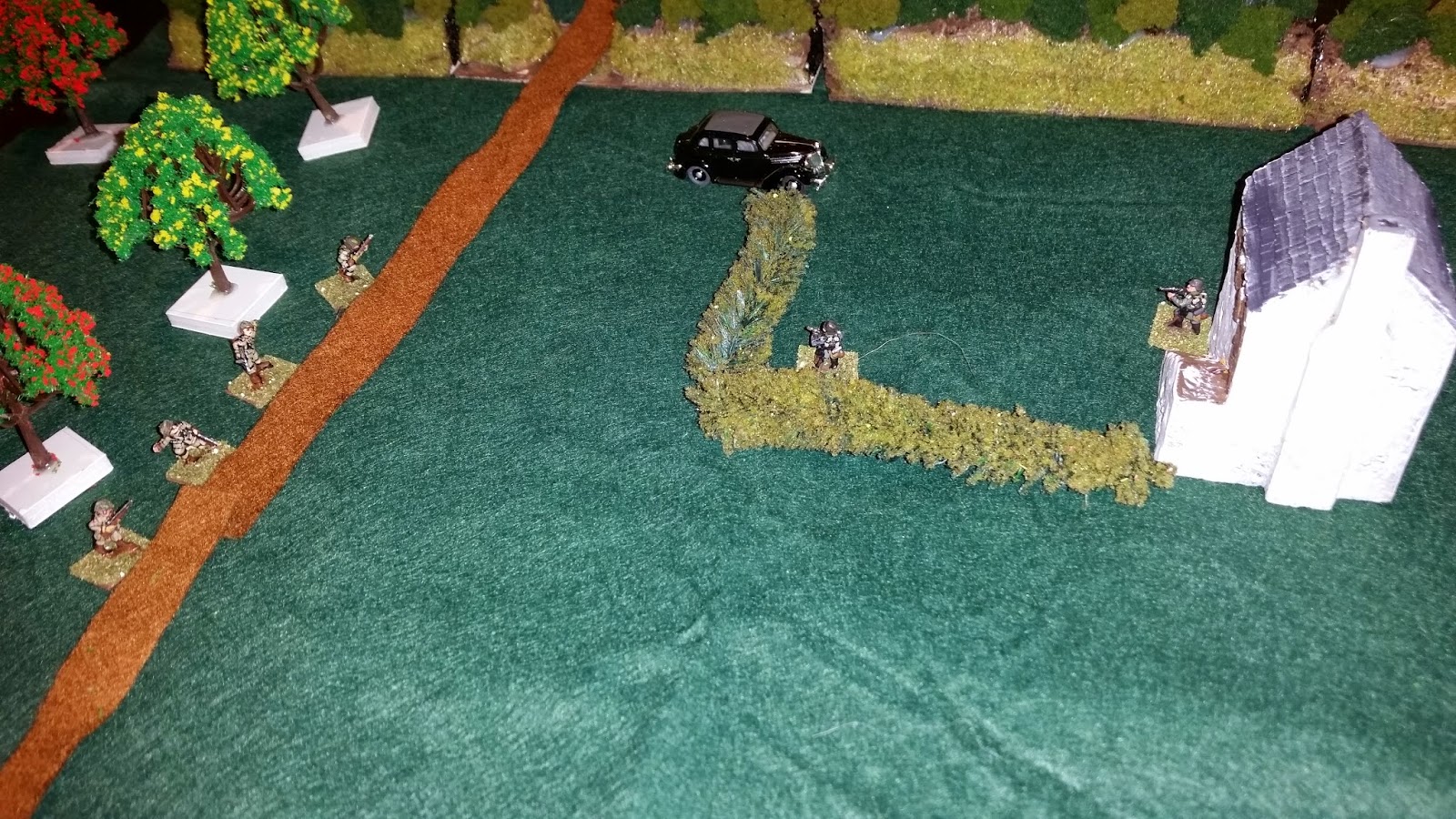 As the Paras come into sight Dorfman passes an In Sight Reaction test and promptly drops Pvt Baker with a round. Private Charlie's doesn't react well to this and he legs it for deeper cover. 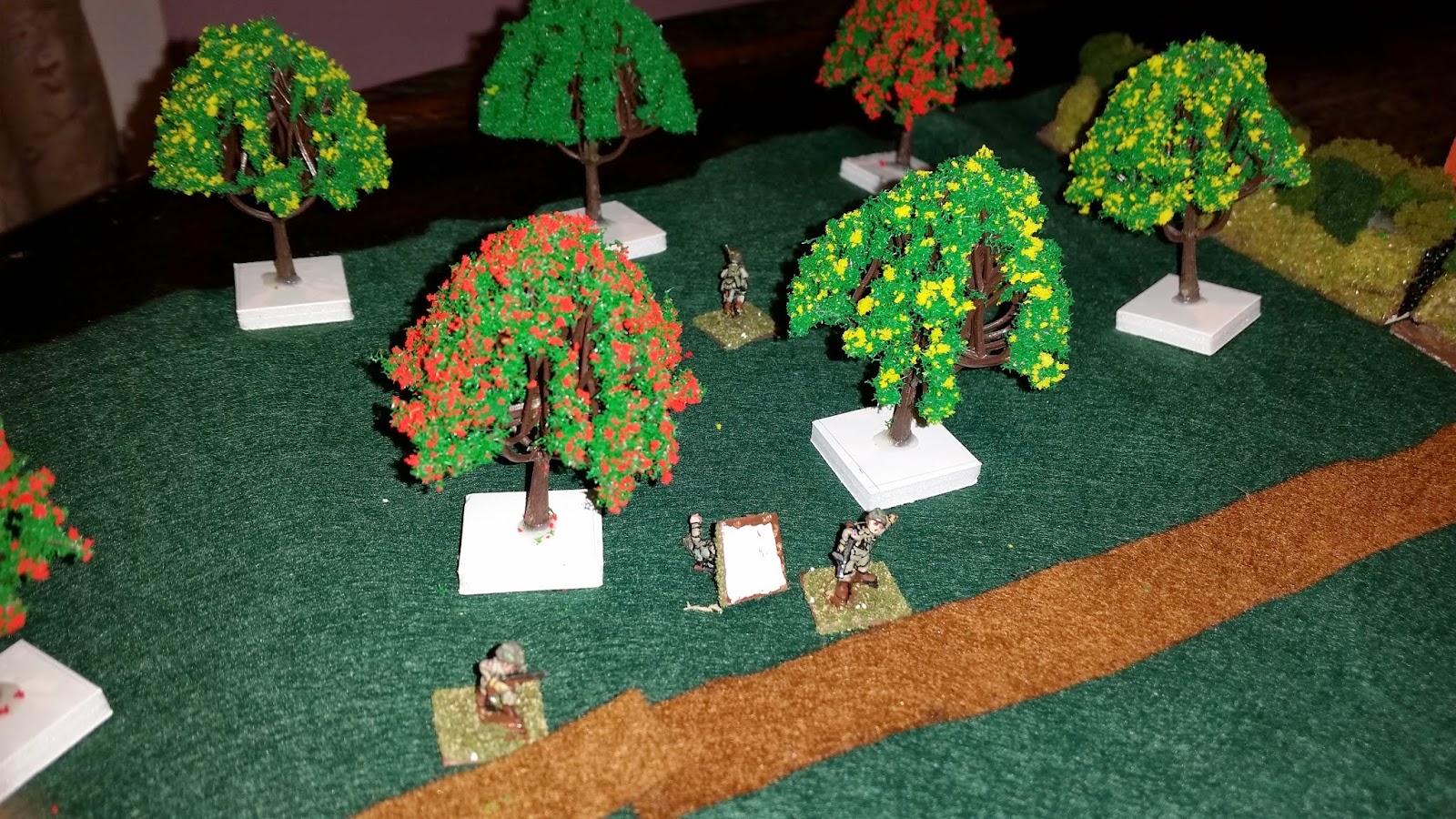 As the firing starts the random dice roll determines where the rest of the German squad is. Oh dear, caught in the open trying to get to the farm - they are in trouble already. 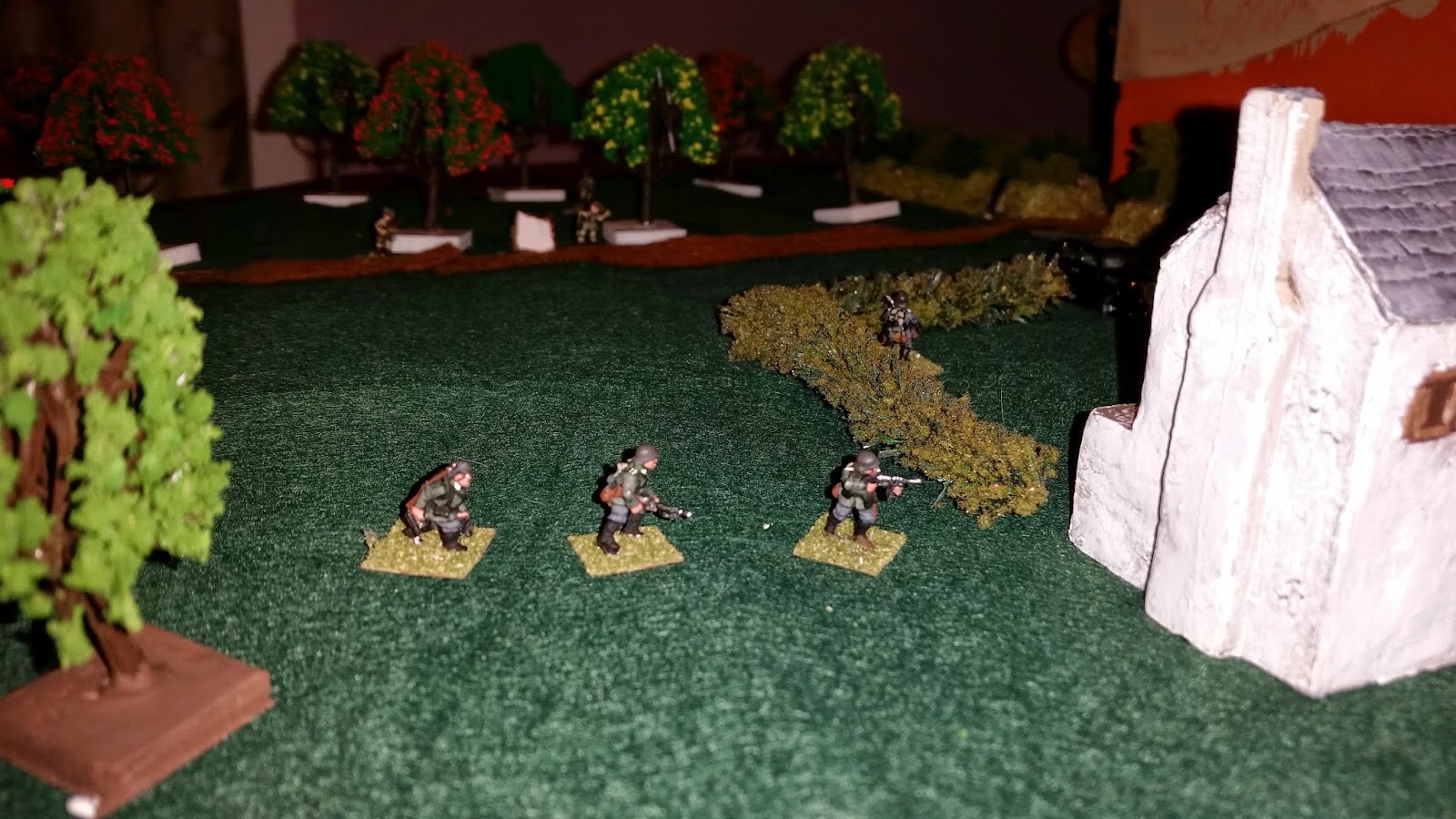 Lt Cotton reacts with venom spraying his Thompson all over the farm house. Dorfman and Engles are both killed in this initial burst, 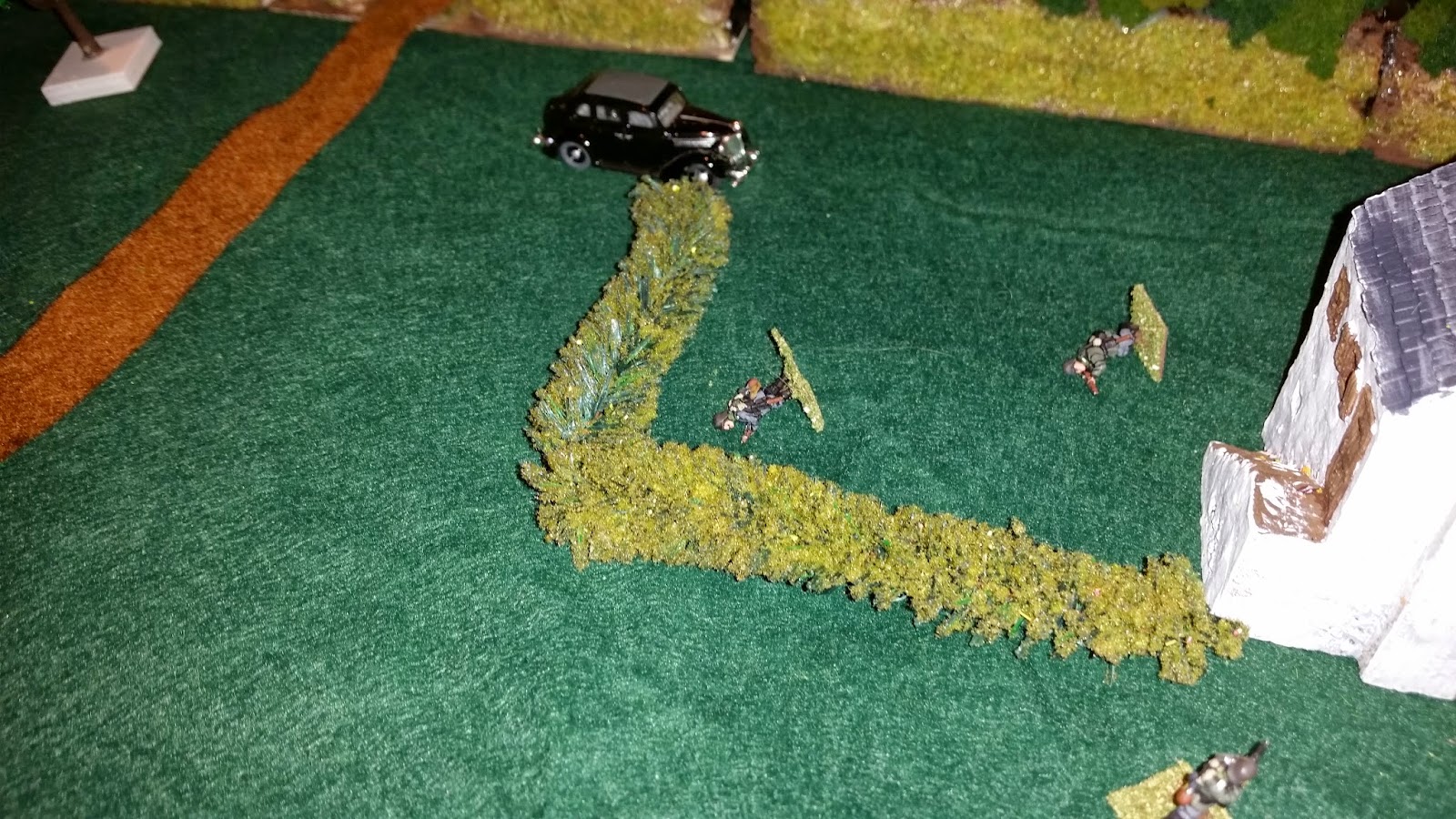 Private Able then managed to kill Pvte Gunnar as he lumbers his LMG across the open ground. This  forces Stiener and Conrad to bolt for cover......in opposite directions. The Sgt makes the house while Conrad dives into the trees. 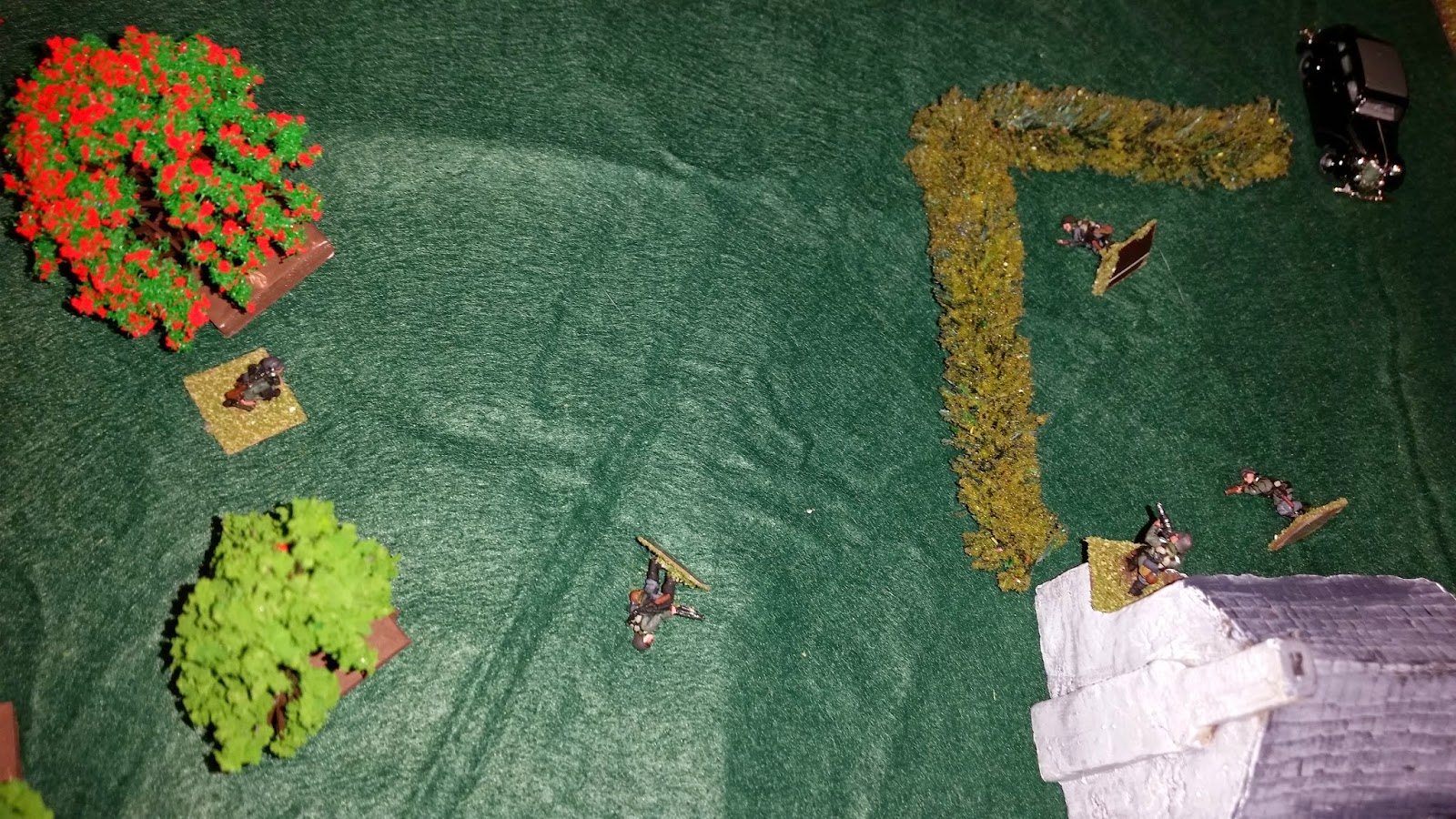 The next turn is quiet - lots of shooting but no hits though Conrad fails a reaction and runs from the front line. 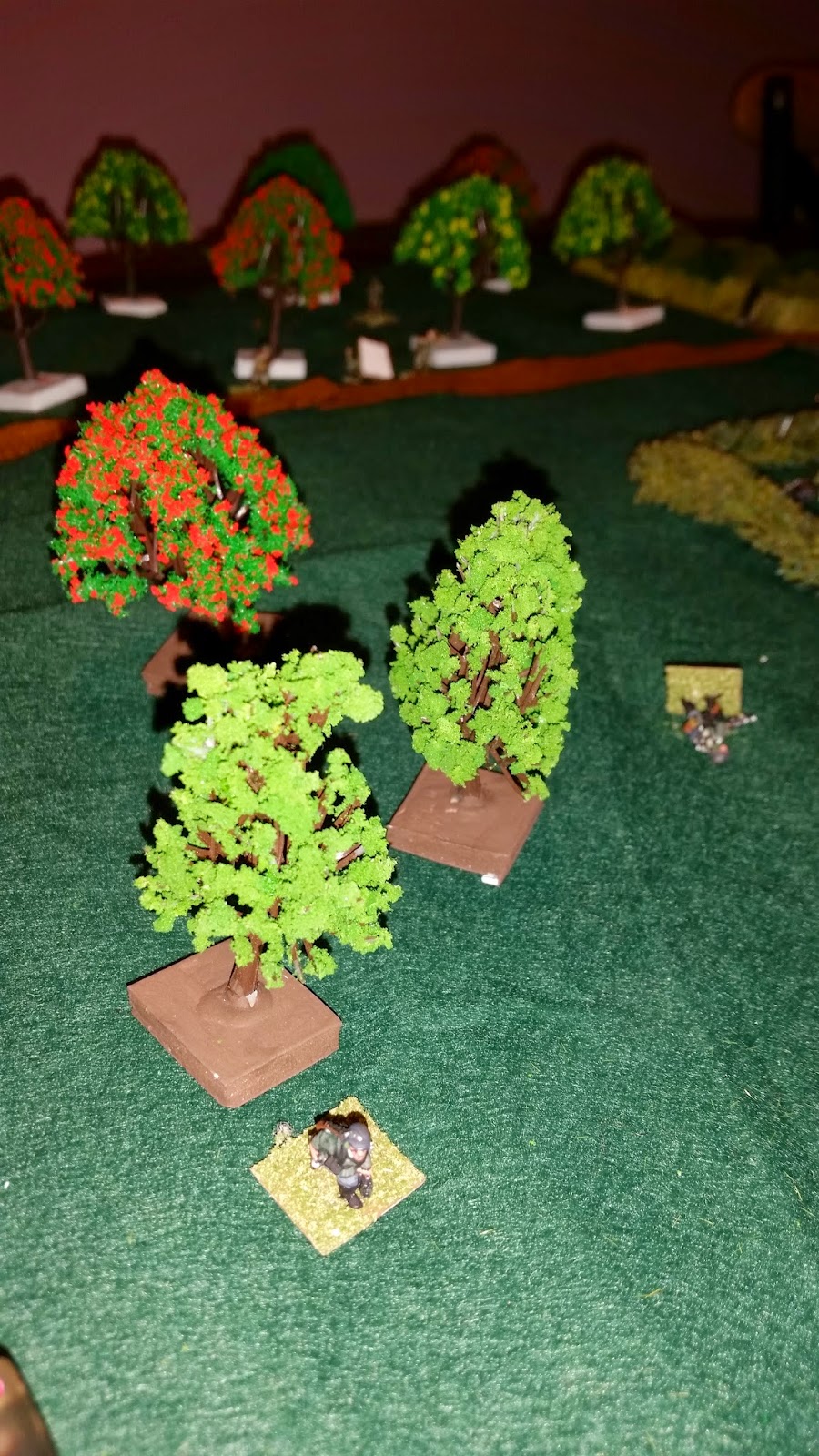 Sgt Stiener reaches the upstairs floor and sprays his MP44 at the US line. Will he hit ?- he need to roll high ! 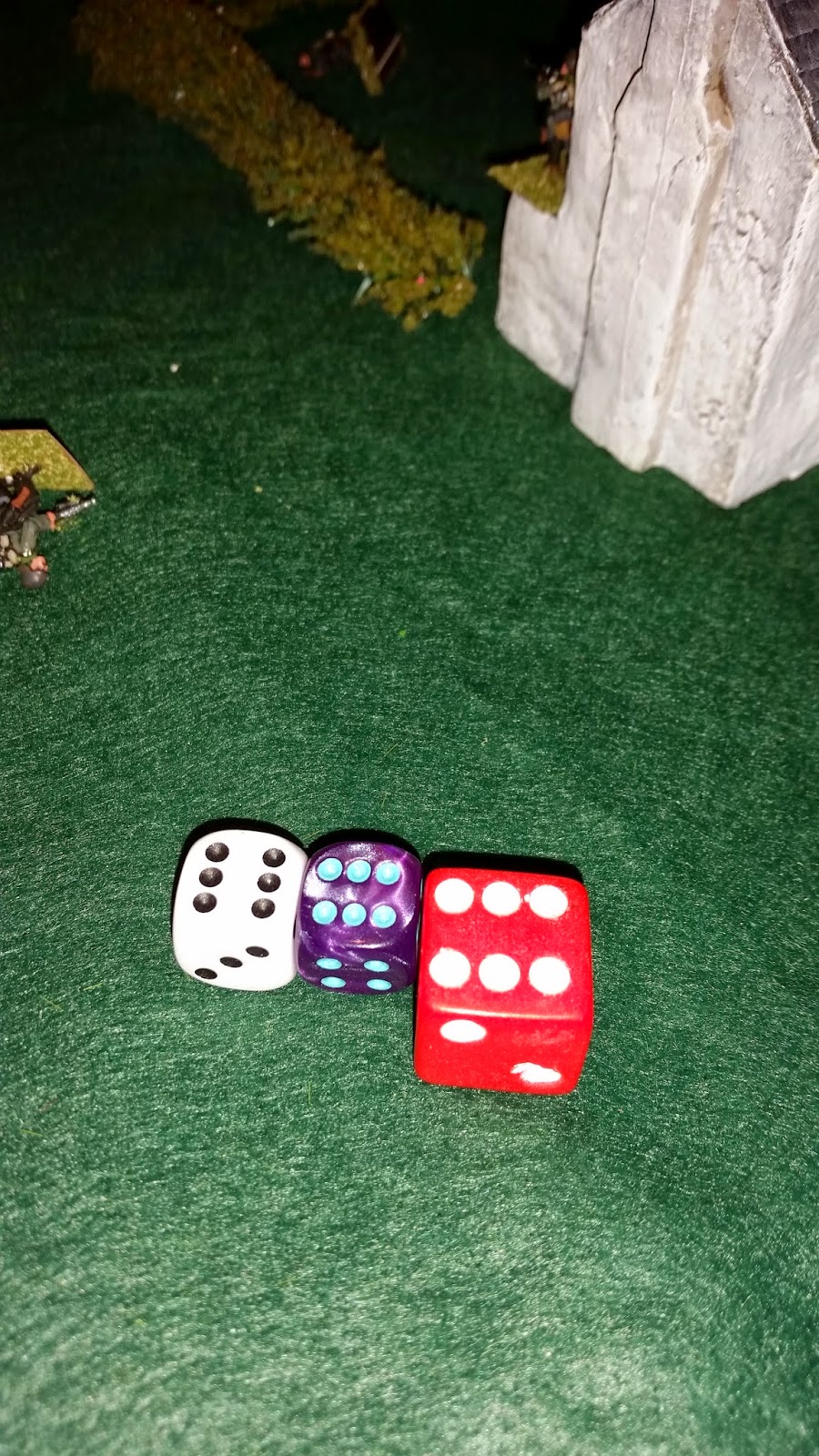 Oh dear - 3 sixes are all hits on Lt Cotton. By some small miracle he survives the hits but is stunned so cannot do anything. Private Able then wounds Sgt Stiener and he is out of the fight, Private Conrad assumes the worst and runs for the hills. 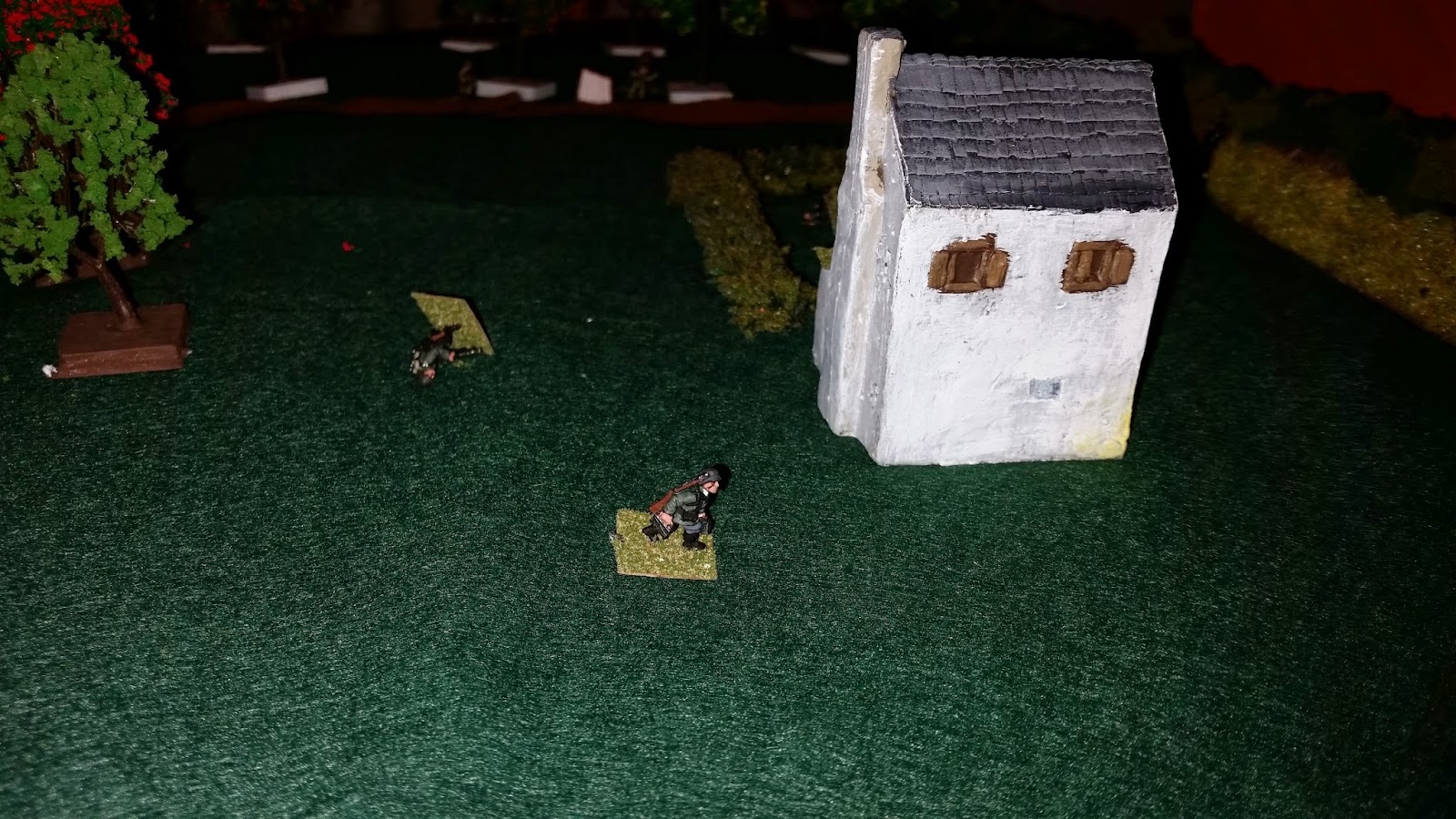 An enjoyable game ! The rules seemed easy to pick up - the version I have are quite old so I picked up the newer version after playing these and will try them out. Some of the reaction tests seem unclear and I know the newer version has some major changes. Hopefully once I am back from Aussie I can get another few games in from the "Blood Upon the Risers" campaign book.

The casualties were Private Baker (US) was only wounded as was Sgt Stiener (GER) but alas for him a POW camp was calling as Conrad left him all alone.

The random placement of the LMG team screwed the Germans. If they had of been in the house deployed, or deployed in the woods it would have been a tough fight for the US but luckily for the paras they caught them with their pants down.

Always good to roll some dice !
Posted by Jacko at 3:36 AM 3 comments:

I'm having great fun with this camera as now I can take photos anywhere and anyway I please.

In between Turks I painted a space marine off a GamesWorkshop Youtube clip. I played a single game of 40k in 1996 - I can't stand the game but I have 20 Space Marines simply as I wanted to paint them. I've yet to master a decent lighting system for my photos yet. 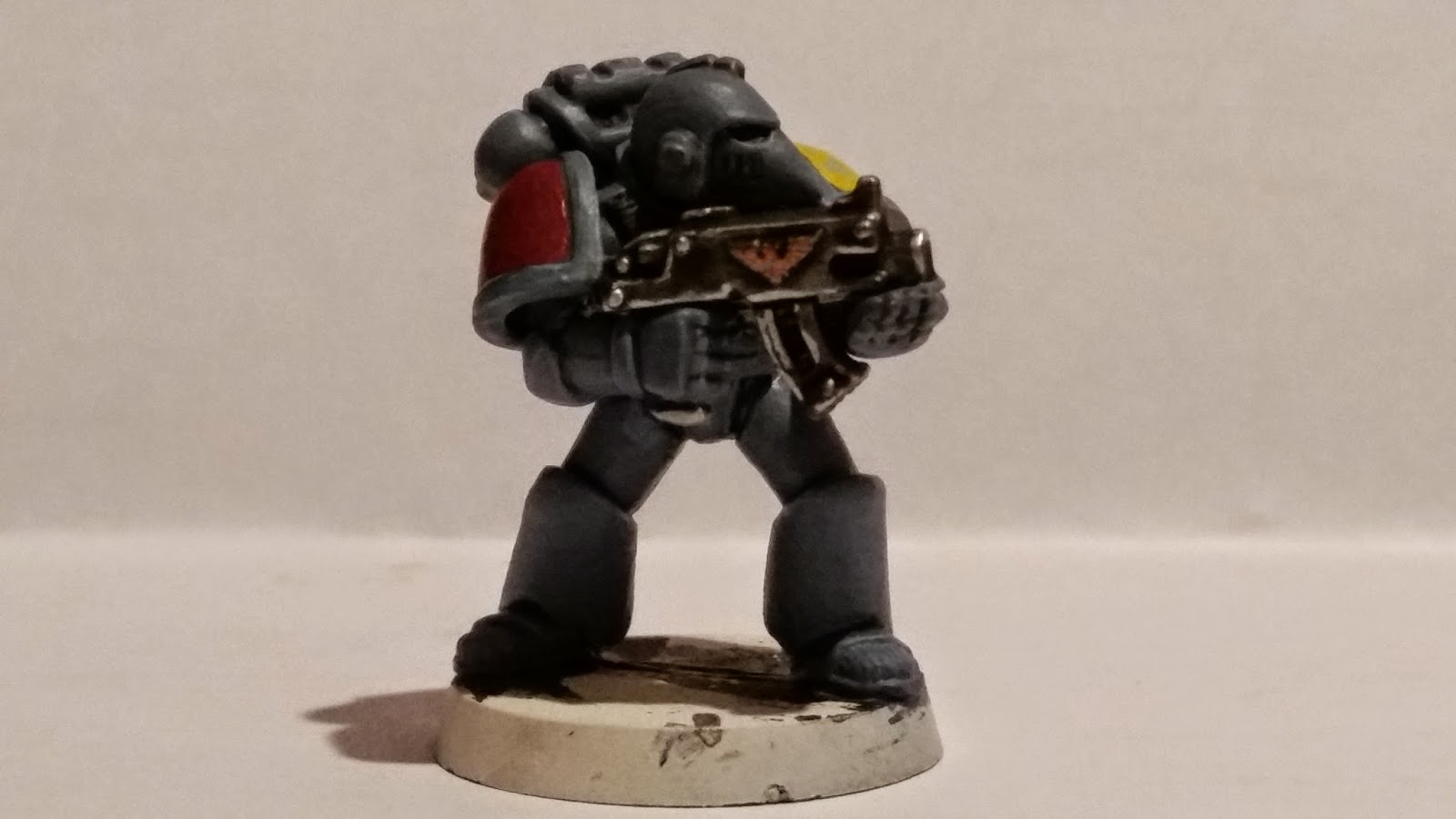 Next are the 100 or so Hotspur french for the Waterloo re-fight. They have been undercoated black and have had the dry brush of grey on the black bits as per Chasseurs Painting guide. I am following this for a large task to see if I can save any time or better my own processes. 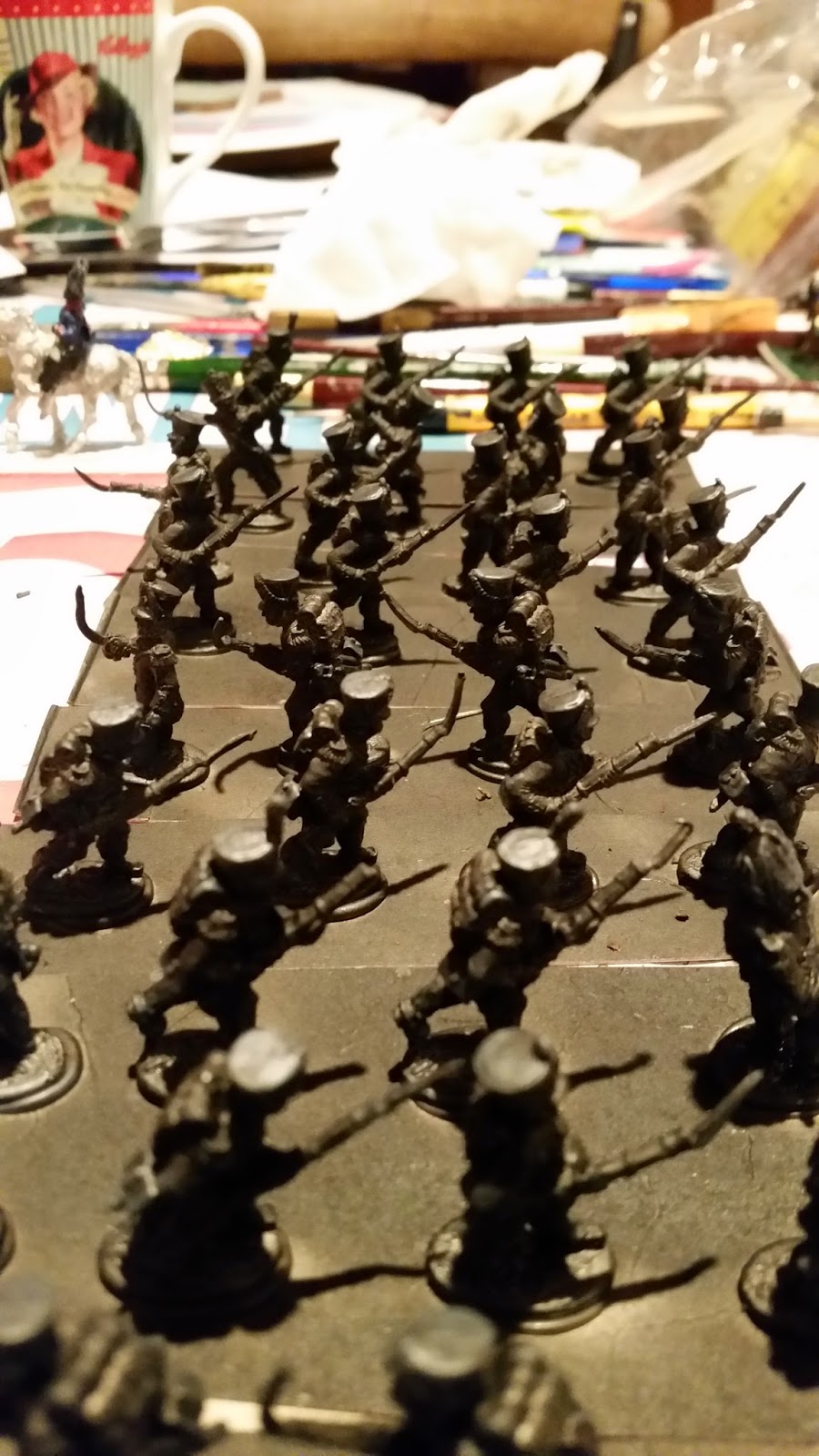 As such for Waterloo I need 14 Generals. So the old classics are being retouched and below is an old figure. I don't know the make - it almost looks like Hinchcliffe. 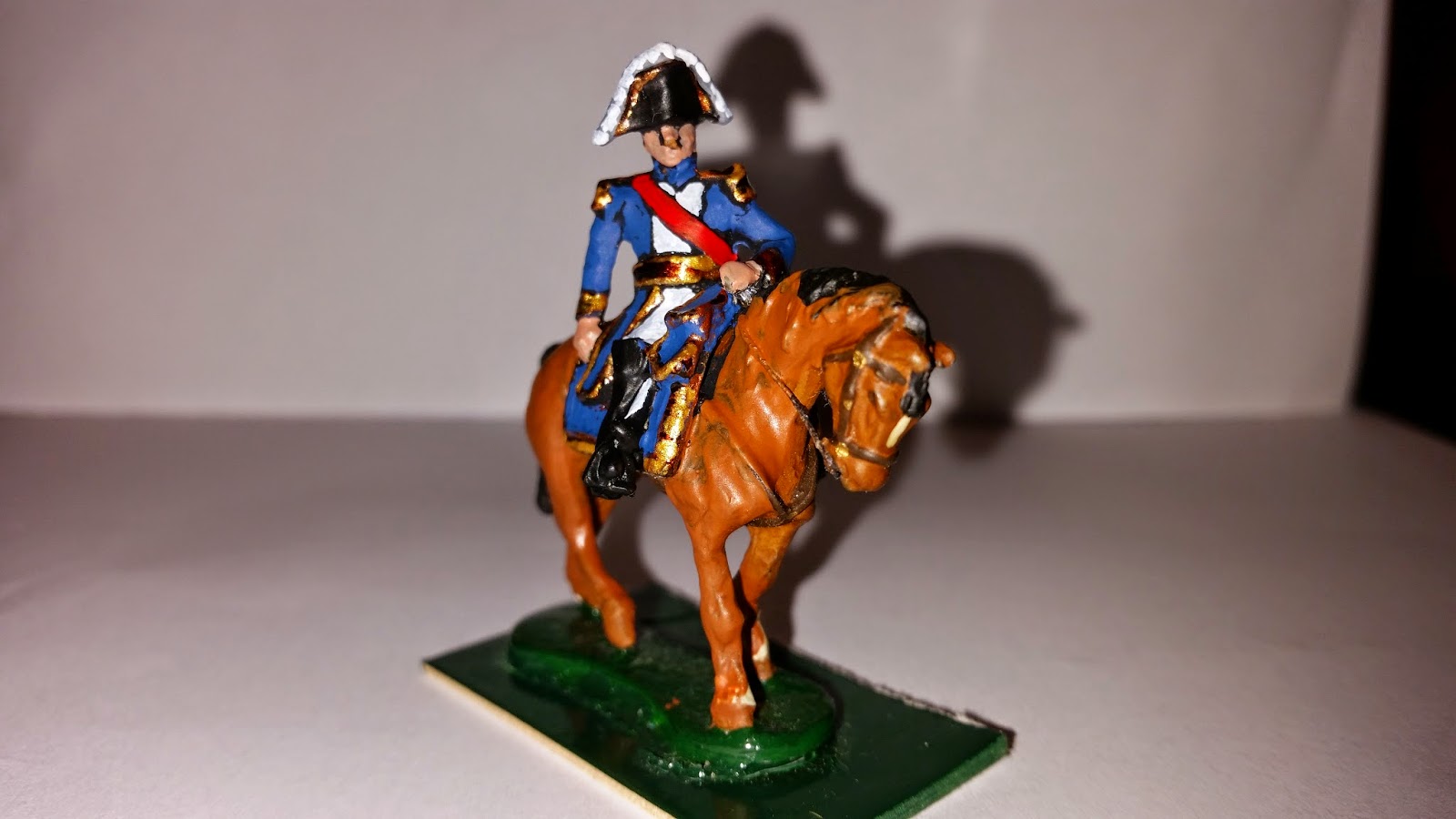 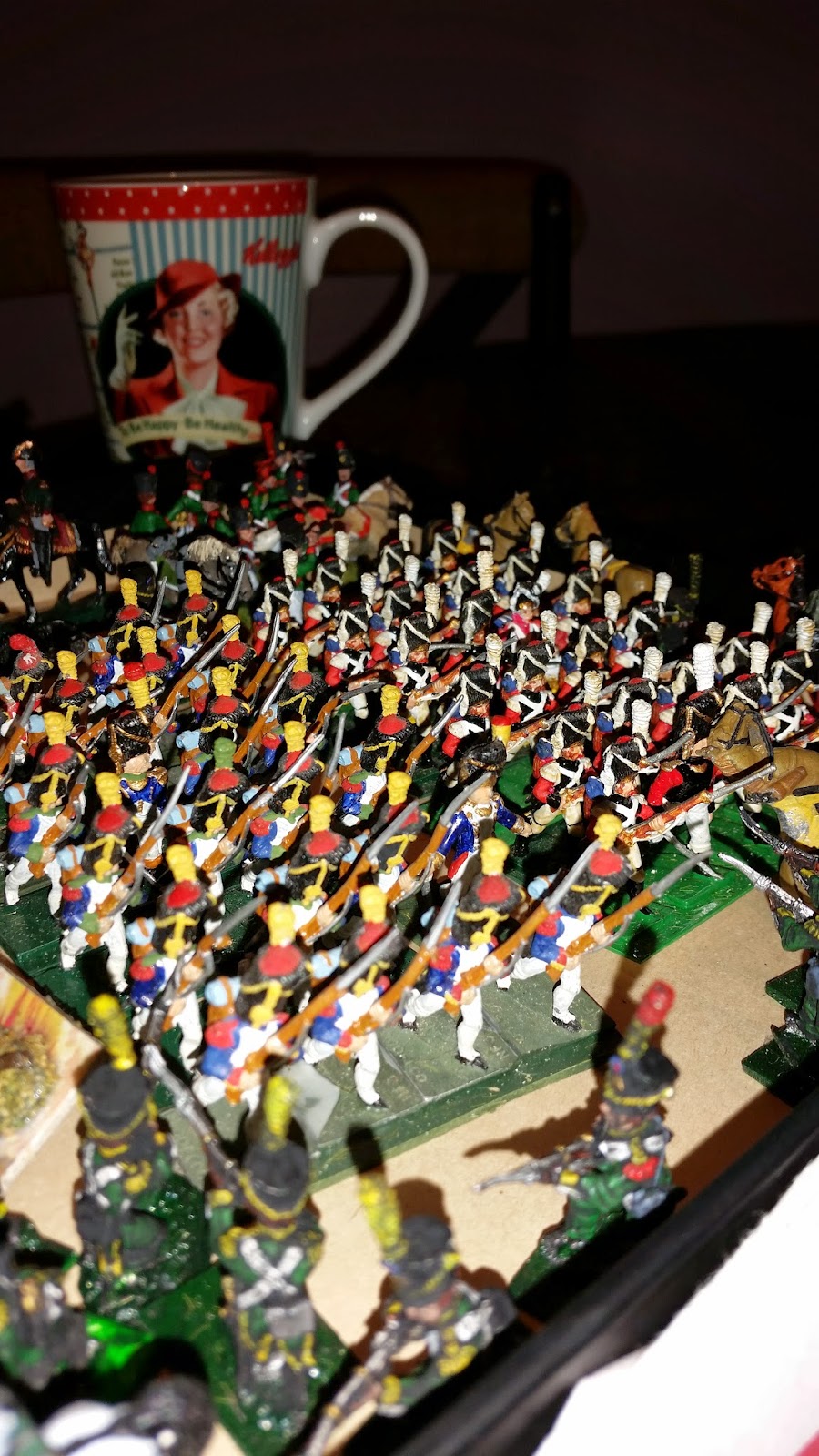 And I found a bag of these lads. Very old figures and I have yet to determine the make. 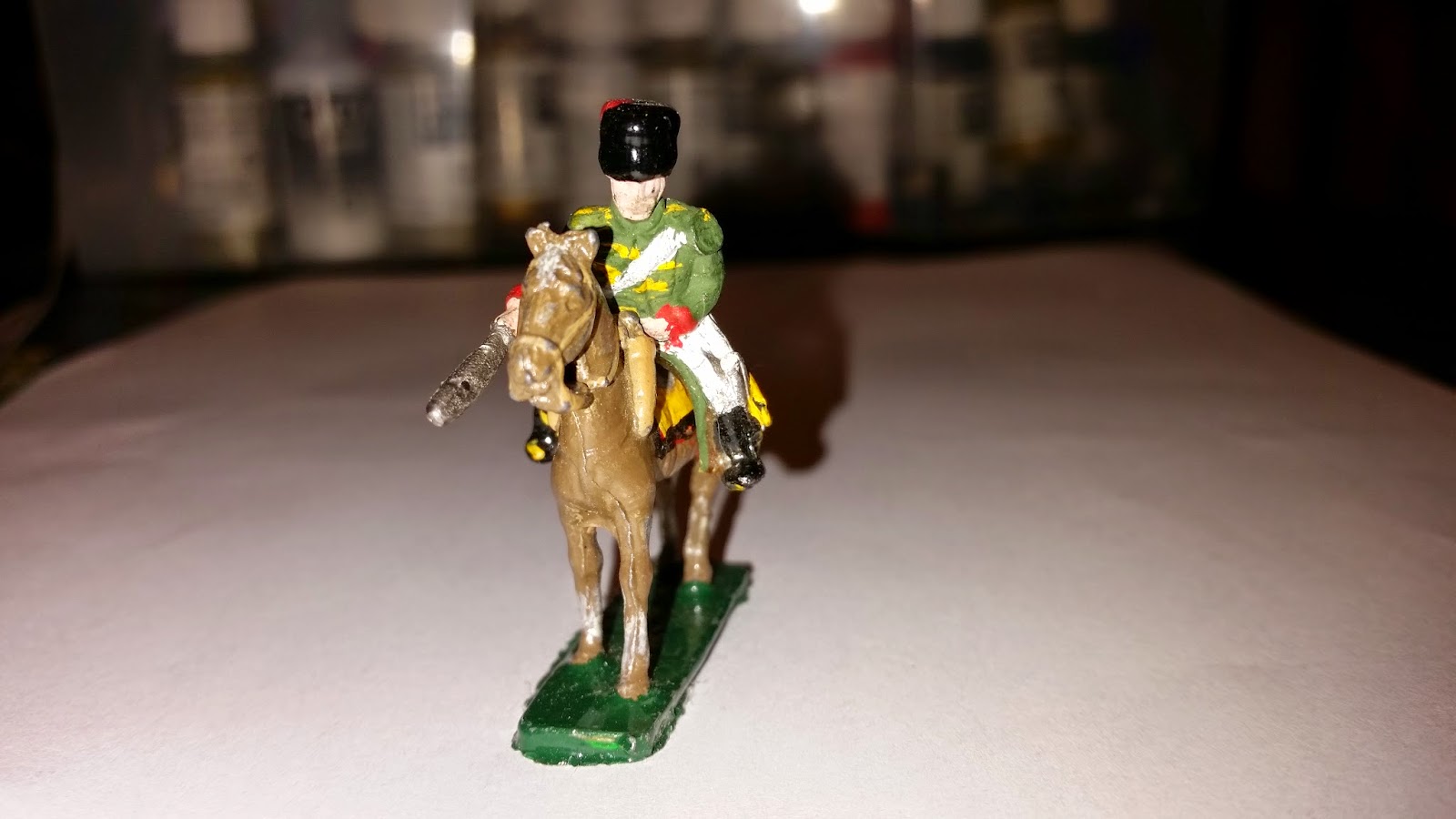