Another night at the table, didn't do any painting but put together the rest of the Perry Dragoons and eyed the box of Hussars with glee. And I have also started toying with picasa to improve the quality of the photos, I still take poor photos but at least I can slowly improve :). Here are some amended pics of the Dragoon Officer. 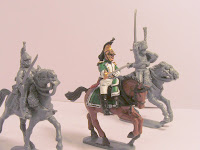 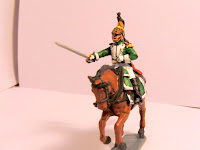 Below are two of the Spanish Heavies I have been painting. Battleline miniatures from Auckland (Spanish aren't too bad). Painted as the Reg d' Algarve, quite pretty with their Blue coats and yellow facings.

The completed units (In VLE a Cav unit is 4-7 elements (2 figures each)), given that Spanish Cav were always woefully undermanned and underhorsed I have set the units at 4. Also given the current Napoleonic campaign the Spanish Cav is quite weak, and I do relish the day that I can command several units of Heavies. 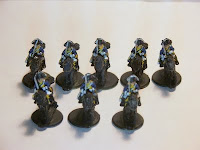 Right on to the main show. 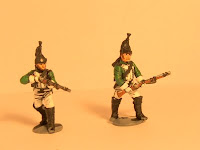 Below is one of the Dismounted Italian Guard Dragoons, I have added as much detai l as I can (and just noticed a white spot on the back lace :( ), I also need to improve my lighting for camera work, but I guess this will always be an issue when the photos are taken at 10.30pm.

Next is a mounted Dragoon, the horse isn't painted but the figure is around 90% done. I might play around with these images brightness as they seem to look different on this PC compared to the latop at home.

An Elite company in his Bearskin, again the horse not started- I quite like this figure but I do need to finish his scabbard and the cockade on the bearskin. 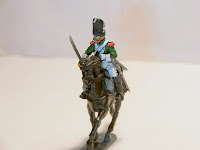 Below a Dismounted Dragoon attempting to scale a fortification, that contains various medical supplies and Comissionary documents. 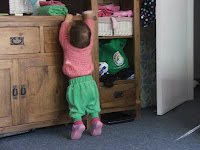 Another of the dismounted Dragoons, I'll be tidying up his eyes soon and will try the next figures with no eye paint, but more increased shading of the flesh around the area.

To ease myself back into the wargaming\painting fold I have started a project to paint some of my favourite figures. I'll make apologies for the fact that the images in this updare are old, but seeings as though I'll be taking new pics tonight then I want to have a good series of posts relating to the same subject (As I seem to drift somewhat childlike from subject to subject).

I have spent most of my time painting Napoleonic Cavalry in 15mm and 28mm. My goals are to complete my 15mm Spanish Cavalry and 2 28mm French Cavalry Units that are Perry Hussars and Perry Dragoons. I must admit, when I got the boxes last year I did my usual "Oh I'll paint one and see what it is like" but this ended up with one figure painted and the box gathering dust. Of course seeing as I was "homeless" for a month while waiting for water, power and such after the earthquake I wouldn't have got anything done anyway, but at least I have a plan now.

The joy of these figures are the fact you get to make them, which I love, while most of the figure is premoulded you can at least amend they accessories and the odd sword arm etc etc. 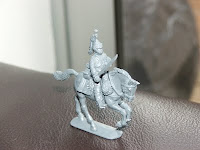 In the Perry Dragoon pack you also get a number of dismounted troops, and I started to paint two of these and a mounted officer some time ago as my testers. I have chosen the Italian Guard Dragoons as my unit and started sometime last year. I undercoat in black, and then paint (well usually) in 3 layers depending on the figure type and make. The following two Troopers have been undercoated and had several layers appied to face and uniform but were yet awaiting a more detailed finish and tidy up (aswell as those gold fish eyes). 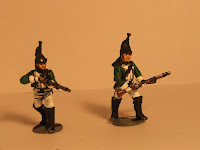 A mostly completed Officer, I need to tidy up the horse and saddle as well as some minor detail on the sword arm, I also need to find the figure as since taking this shot I have no idea where he is. 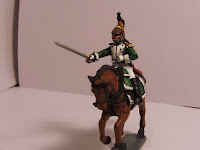 My test figure from the Perry Hussars box. I have made them the 2nd Regiment (Westfalia) as I had a surplus of blue paint, aswell as having a large Westphalian Infantry force, why not have hussars with them :). The figures themselves are awesome and this test figure still has some way to go for finishing but I intend to upodate some of his comrades at the same time. 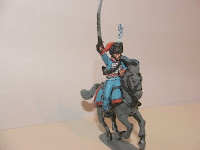 I've finally had the motivation to go into the garage and sort out the crushed and scattered remnants of my wargaming armies. The 28mm french are upside down but appear to been in a good state, half of the Allies escaped as I had onlt rebased them a week before and they were still in the cupboard. 20mm plastic armies were thrown around like confetti and are basically in every other box they could land in :).

15mm Spanish are 50%. what is odd is that the newly done figures survived intact, while all the 15 year old ones died en masse. So I need to start a project to get what I can out of the older figures, aswell as finish the unpainted units I still have left. I'm also going to paint a 28mm Plastic Hussar unit to get the motivation going.

28mm ww2 is intact but the bases all came off, so some glueing is needed. Though it appears all my glue is dry so a trip to a shop is needed.

Cheers
Paul
Posted by Jacko at 1:42 AM 2 comments: