We obtained a cat from the SPCA and at night (When my daughter is asleep) it likes to be near me (Where I am usually painted at the kitchen table). In the last few nights it has found the paint pile an interesting place and keeps jumping on the table (Where it is not allowed). 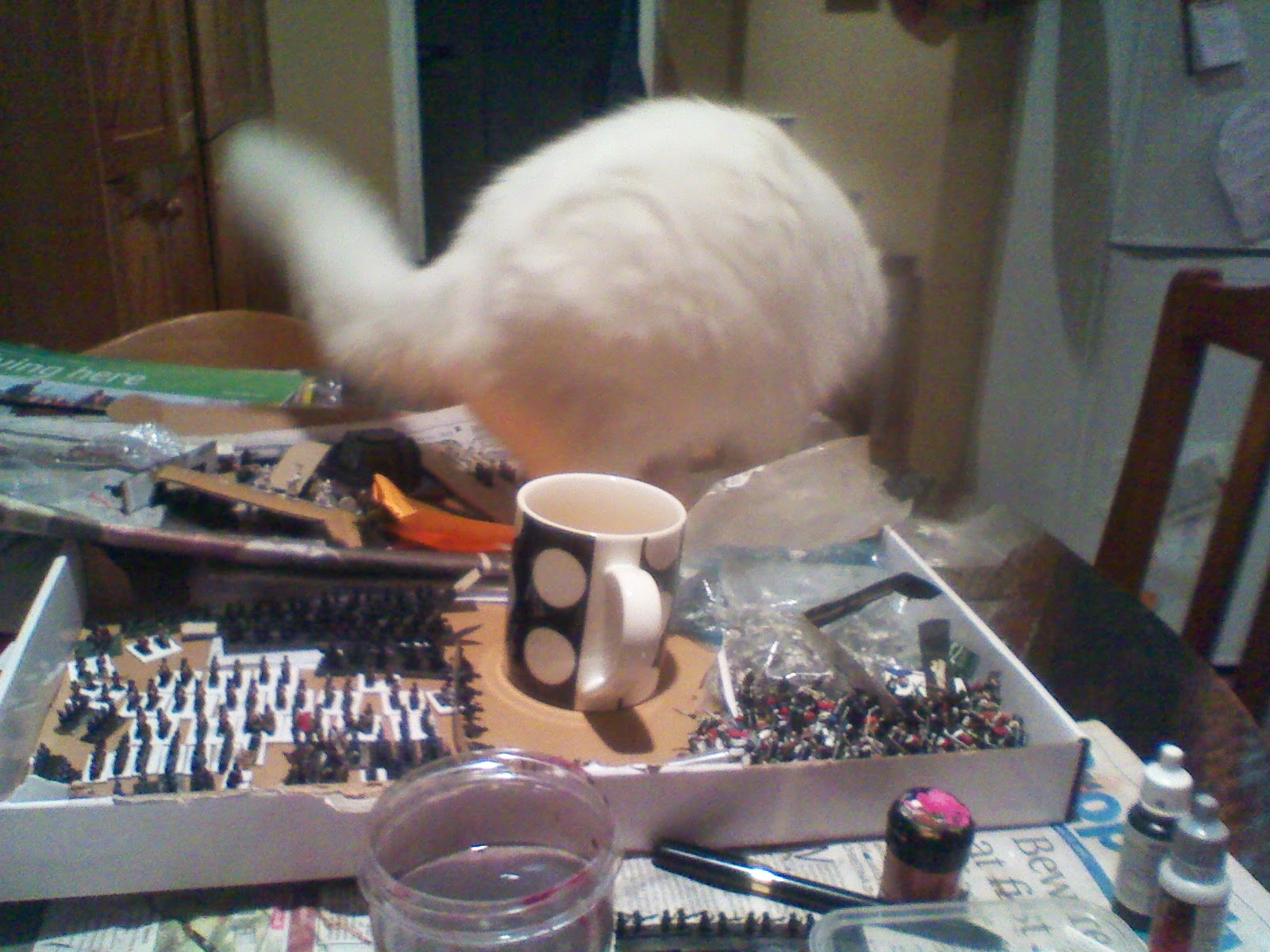 However the cat is tone deaf so no amount of talking to it will help. I have to walk around the table and pick it up from the front (Otherwise it gets a fright being deaf). I must have done this about 10 times last night so my output is being affected but I guess it is good exercise. 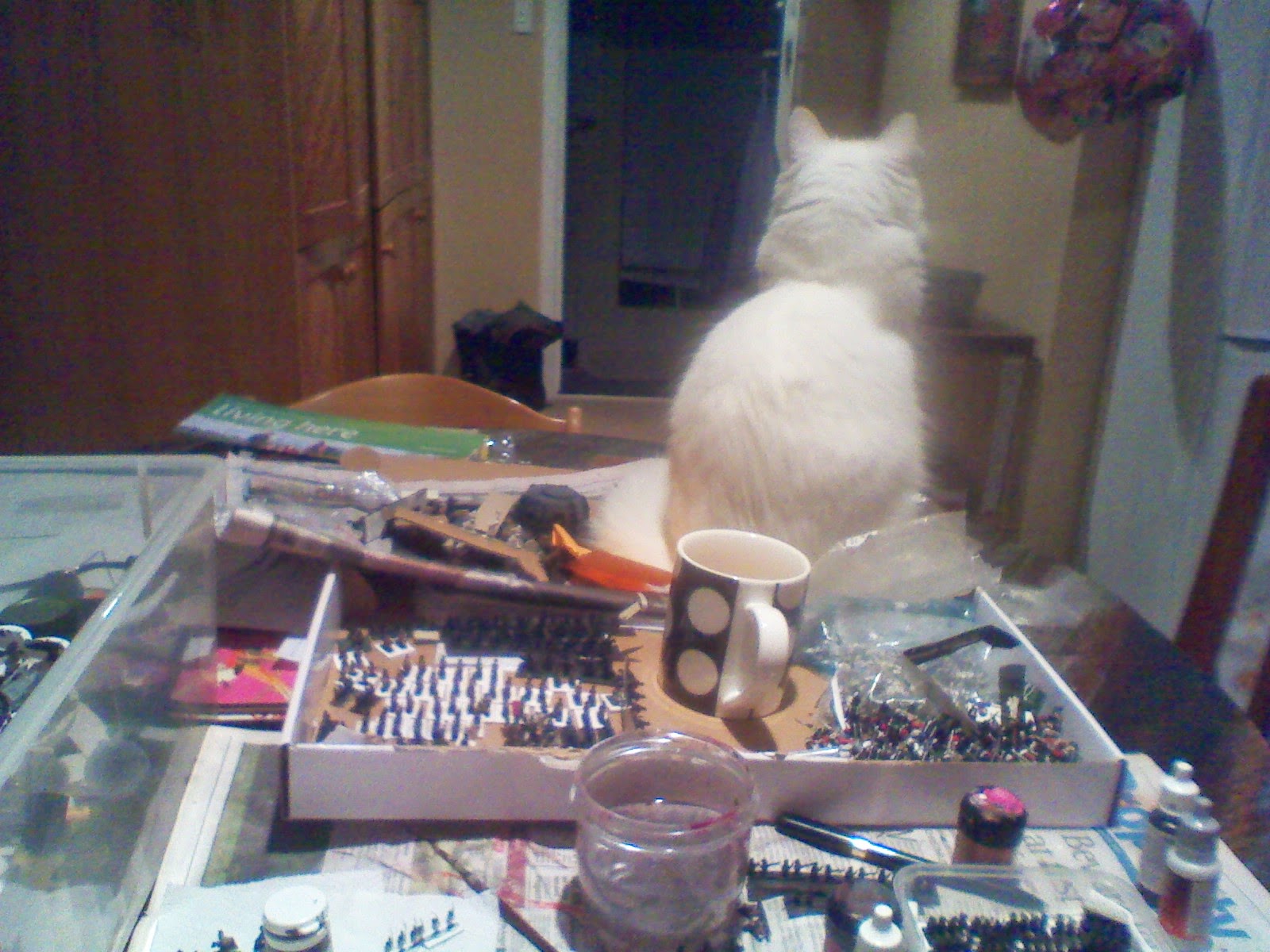 I have started to re-base my French and so far have changed 6 units around, finished painting another 2 and am just about to finish repainting one more. Then I'll tidy up my cavalry and fix some guns (the guns were shattered in the quakes) and then I'll have a handy small force for a game. All the standards were busted in the earthquakes too so more work is required on those.

Then I shall continue on with my Saxons and Hotspur figures, then maybe the Russians and Prussians too..........and that Austrian unit I have floating around.

To make things worse I have almost finished my 6mm 1815 Prussian Army for solo games. And when I mean games, I mean Plancenoit at Battalion level.
Posted by Jacko at 3:31 PM 2 comments:

Blast from the Past.

My first purchased 25mm Napoleonic unit was from Military Miniatures in Auckland and was 25mm Hotspur French - I picked up 50 odd figures and 12 Chasseurs. Over my 10 year hiatus and the next 15 or so years the infantry dwindled down to 34 odd figures so I looked at finding if any more. I found the sculpter had passed away, some if its other ranges still existed under other companies but the Napoloenic line had dissapeared from the world. I managed to find another 10 figures at a swap meet and I also asked on a few forums if anyone had any (Surely i coudnt be the only person that had them) but no luck - Some NZ war gamers mentioned having them but they were sold.to others and their fate was unknown.

As they are my first ever unit (and my favourite figures to be honest) they are my favourite so I gave up getting more.  But a few weeks ago I tried one more time and I asked on the yahoo groups NZ forum if anyone had 4 of the figures so I could finish one of the units and a fellow wargamer replied. The end result is this, 100 or so beautiful little 25mm Hotspur French figures FREE. Thanks to the Brian at the blog Woolshed . 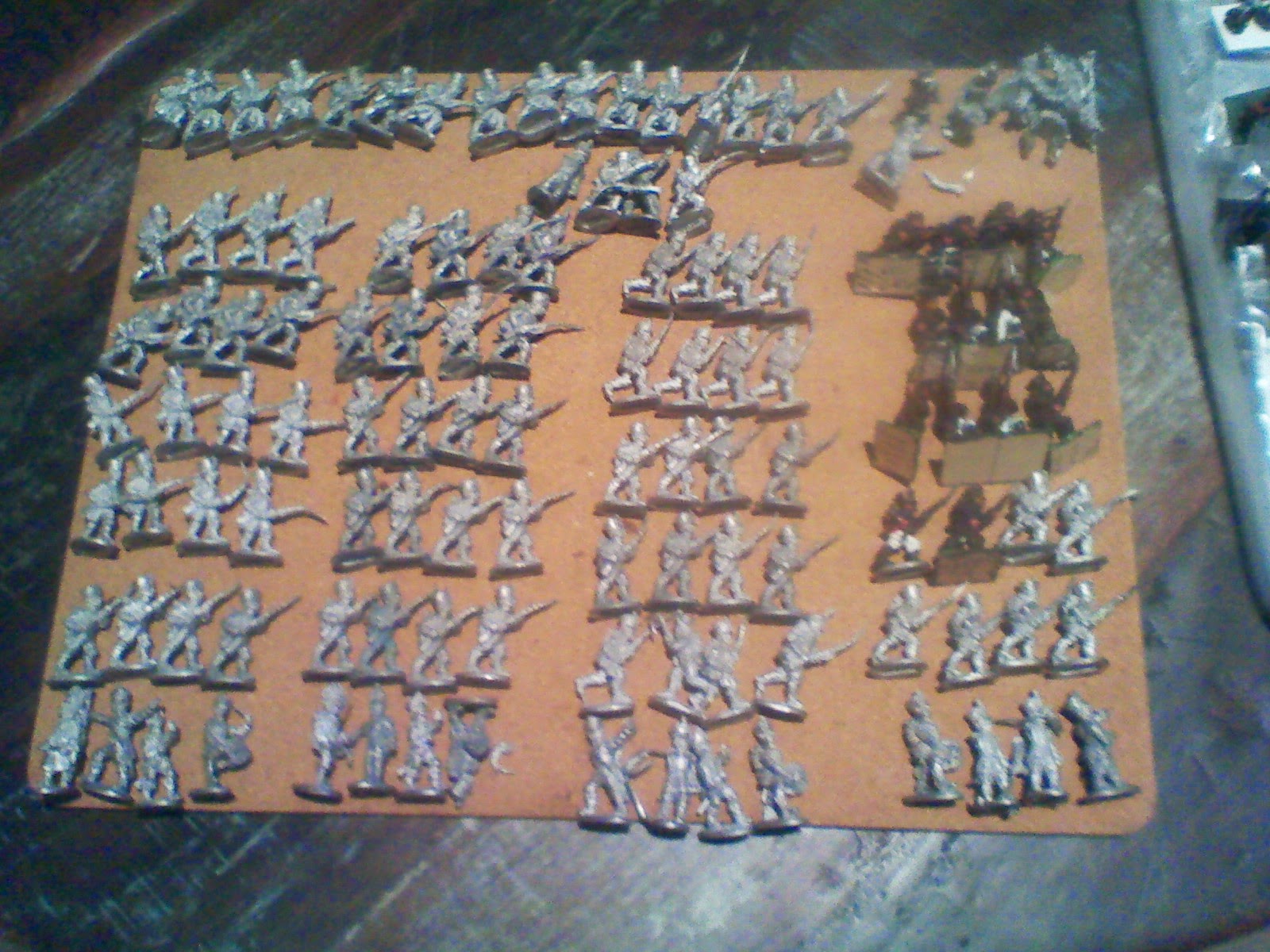 He wanted them to find a home (He had a load painted up himself) and gave them to me free and I am very thankful. (Of course I have his address from the packet so I'm sure something will find its way into his letterbox soon ;) as a thank you).

So I now have enough for 5 Units (plus my existing re-painted unit (Finished last night) which then leads onto another problem - I've been repainted a napoleonic unit every few weeks and that urge to do more is starting again. Considering I have 150 Hinton Hunt Saxons, 40 minfigs,40 Italians and 30 odd cavalry to finish up (As well repainting 6 existing Front Rank units) I could do with a good French Napoleonic phase - (The Russians and Prussians need a rebase and touch up too but the few British I have I might sell). What is the grand total of the French - well its a lot (Too many to be honest but you can never have enough can you).

Prussians and Russians (About 12 units each plus 4 cav each)

I should really have a game with them.


A side note - As part of my 6mm armies I picked up a few aircraft and I have been painting them as I do the ground forces. Below is a Me109 for the France 1940 games I plan to play solo. I quite like how it turned out though I have to say basing them on the stands has been an epic journey. I drilled some holes but my first attempt failed so after about 4 attempts as a last resort I used super glue. 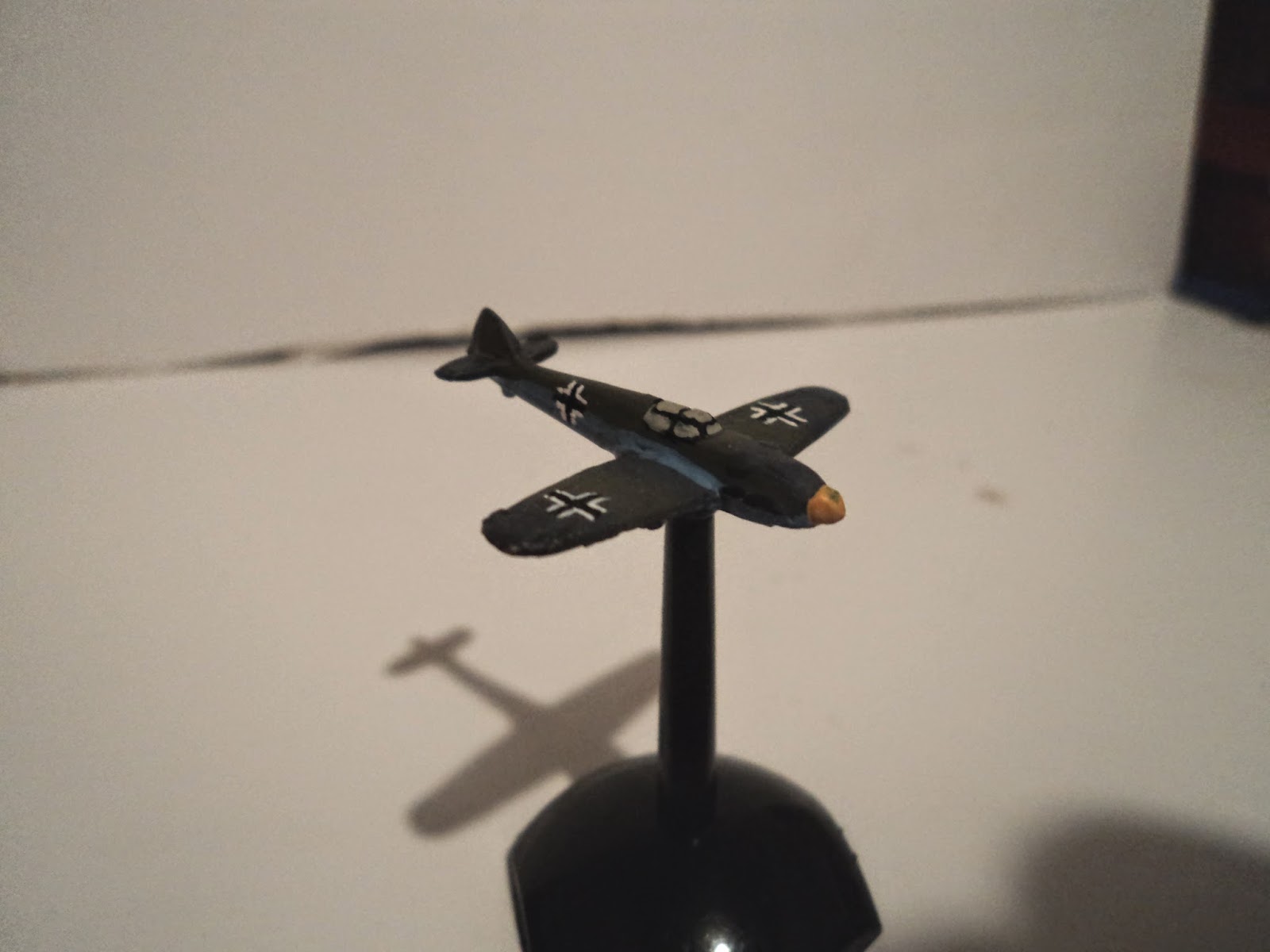