I'm off to Australia today for a few days work, I'm going to try taking some paint and figures with me to get something done while I am there as while I'll see a friend of mine two of the nights the rest of the time I usually spend sitting in the hotel room bored reading blogs and watching sky sports (Except that dreadful Aussie rules).

So - I have taken my 6mm Prussian 1813 group  with me and the base coat paints to at least get something done while I am there.  They are in a small box wrapped in a plastic bag  next to my trusty bathroom supplies. 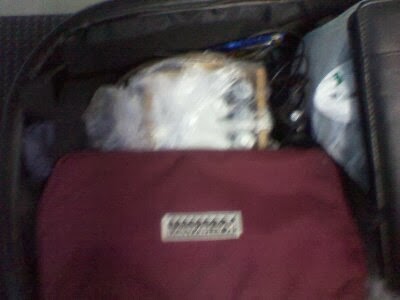 They are packed well so hopefully after a long days work (at -3 hour timezone) in nice 30C heat it will allow me to relax and get something done.

I have also taken a place in   ThistleBarrows Napoleonic PBEM campaign as Marshal Mortier and the 3rd French Army, defending Eastern France from the hordes of Austrian moustachios.  Initial moves have been done and time will tell if my cuning plan comes to fruition or I end up on the boat carrying someone's bags to St Helena.

I ordered some dice from dices shop online. (Not a big order but sufficient )I'd be happy but I never received the order and the supplier does not want to respond to me at all.So I used the power of social media and sent them a message via facebook which wasn't replied to. so I posted on their page, that must have got a reaction as they deleted the post and removed my ability to comment or send them messages. Silly buggers as I have two facebook account so highlighted this to them in another message.  I'm quite a reasonable person, if a supplier said to me "oh dear" or "bugger it got lost" I actually wouldn't mind and would write it off  but when I get no response to anything it just feeds my motivation to get an answer. Their weak attempt to stop me asking about my order probably wasn't their greatest move. The value of the order is insignificant , its the principle of the matter ! However they still have an obligation regarding "our contract" and that isn't settled under I receive the goods or get a refund.

I'm guessing they have gone "He's in NZ he cant do anything" but alas for them as a citizen of the UK and my plan to return sometime this year for a holiday I'm not letting them away with that. Neither is my cousin in the UK whom has is legal sights set on them so I'm sure going to enjoy this !

My camera has also been damaged as the power cuts out (the batteries are fine) so I'm waiting a while to get some photos of it to show what I have been doing. I did manage to start an entertaining game last night with Archduke Piccolo so hopefully he will post some pictures up.

I am off to Aussie next week which should be good fun and am looking forward to a trip to Melbourne in March where I get to visit Eureka Miniatures and get some more Ab figures.