Belated as per usual but I have been on banks Peninsular since Xmas Eve and have only now got internet at the holiday house in stunning Timaru. As such I don't have any figures or paints with me so it will be a week at least until I can get painting again. I plan to have fun with my family at Caroline Bay, sit on the beach and get as much sleep as I can.

Have a safe new years everyone.

Below are my 15mm Peter Pig Ansars and Tribesmen, a photo I found on the camera ! 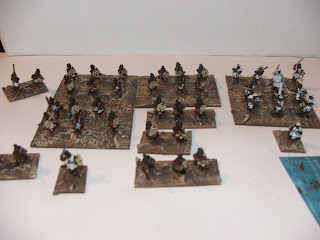 So finally I got the camera out and have taken a tonne of pictures which I will post over the next few days. It was a really nice day today but I didn't get a chance to take any pics outside which is why my late night pictures are pretty poor. I'm in a pretty bad mood at the moment so my commentary will be brief.

I'm getting into some more 15mm Napoleonic, I started these guys 6 months ago and I have forgotten what unit they are (Idiot!). The figures are Old Glory Wurtenburgers but I must have had grand plan to make them something else (and never noted what I was doing - Idiot !). The figures are undercoated and ready for shading and the works. (I'm painting 12 at a time) 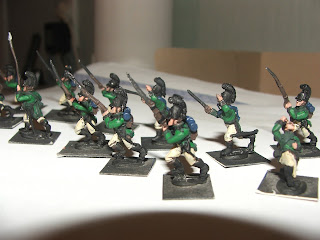 I also found a very very very old unit of Italian Grenadiers so I have touched them up a little and hope to base them this week. They look fairly tired in this photo so hopefully based en mass they will smarten up  a bit. 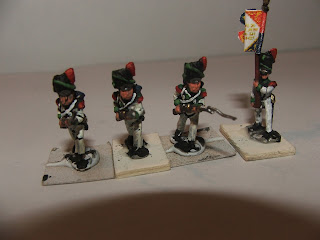 My flagsofwar standards also arrived so these have been glued onto the bases. Once the glue is set I will tidy the flags up by touching up the gold edges of the flags to make them more realistic instead of paper printout looking.( The unit is the 83rd Pennsylvania ) 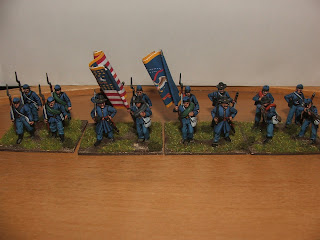 I have also just about finished another two stands, a few corrections here and there will help... 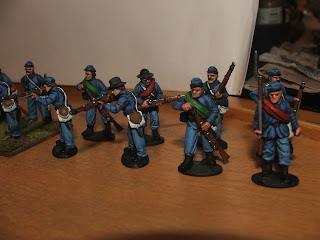 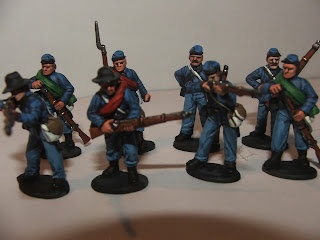 Close up of the Colour party. Foolishly I didn't check my figure positioning when making the bases and I wish I had of uses another officer figure as his clone is on the other side. 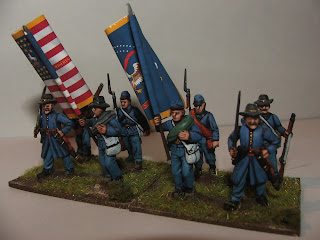 So November 4 I ordered another box of Perry 28mmm ACW from caliverbooks, Until I received this order I held off on the ACW painting (Added of course by my shaky thumb), a week later I was also tempted by a Peter pig 20% discount and some Irregular Miniatures 15mm Jungle animals. These were my xmas presents to myself and I left it at that.

Peter Pig arrived promptly as always, Irregular arrived but no Perry............so I placed it down to a small delay certain parcels get from time to time. I then took advantage of a mightyape.co.nz deal and ordered some Flames of War desert buildings - they contacted me and said it would be 2-3 weeks until they could send - which was fine for me - I'd get my ACW and then after Xmas some FoW - Everyone is a winner or so they say :).

They are pre-painted, yes its a little lazy of me but that's what money os for. 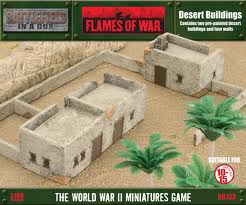 Mmm Dec 7 and still no Perry...........so I contacted Caliver and they apologised as my order was processed but nothing happened to it - BUGGER. Then a knock at the door and there was a FoW Desert Building package from mightyape being delivered 4 DAYS after ordering - HUZZAH. So I guess the Positive and Negative forces of wargaming luck have shown themselves today.


So I now need to make another Caliver order for some ACW and a box or two of 28mm plastic WSS figures that two people talked me into getting (well to be honest they only mentioned it, I talked myself into it very quickly.)

I have also tonight done a nights painting with no shakes - things are looking up. Hopefully I will have some pictures up.
Posted by Jacko at 6:57 PM No comments: