So in an effort to kick start my SciFi forces I have been testing painting Epic figures and in rather dashing Yellow.

Golden Yellow Base, Earth wash and a few highlights with lemon yellow. Of course I can't leave it at that and need to insignia and such onto the shoulder armour. 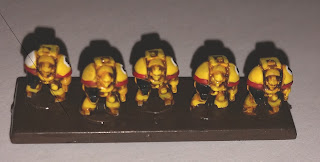 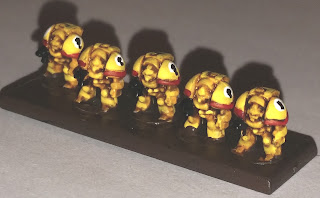 I am quite please with how these turned out so I can now charge into the remaining stands. I plan to have two Chapters - Imperial Fist (With all the Support) and Ultra Marines for some infantry support. I have some Imperial Guard "type's" to be general Militia types and all I need now are some decent bugs.

After my trip to the uk I have not done a single war game related item until just before Christmas.

Before Christmas Andrew and Colin invited me for a SciFi game and I brushed off my dice and played some classic Human Marine types versus Spare Marines. Lots of shooting and daring operations resulted in a draw. 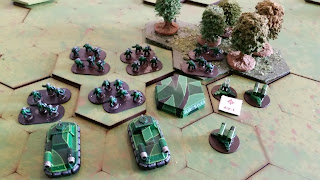 Afterwards I even tried my hand at DBA with two forces of Greeks (?) having a bash. A clash of generals saw me victorious though to be honest I had no idea what I was doing and Andrew was guiding me in every move. The only thing I bought on the day was luck.

So now I am motivated again to get some things done.

First on the Agenda is finish some more Epic Space Marines (Imperial Fist and Ultra Marines), Imperial Guard (or Human milita types) aswell as a few stands of green people with sharp sticks. I also need to try some games to start testing my Force generations.

Second item is a Kings of War   Elven Army that I have been tempted for a long time to get. I played a few games of Warhammer back in the day but then GW all seemed to turn into a pile of excrement. I have read a lot about Kings of War and would like to play 28mm fantasy.

Third Item is Napoloenics (As per usual) - The Prussians need some love !

However it is time for a clear out of things to make some space and also fund the above.

All the best for a safe and happy new years.