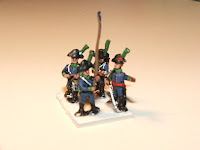 Some Spanish Light Infantry (Unit no decided) - Battleline figures, not too bad figures I suppose, though the glue on heads are a pain in the backside. I didnt have any light infantry painted for the Spanish so I have done some. All I need to do now is add a flag and finish off the base. 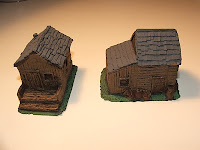 Some 15mm scenery I picked up off trademe, a few farmhouses, you can never have too much scenery ! I have some river, a bridge and some other buildings to go. I have never really had my own scenery so its quite pleasing to be painting some. 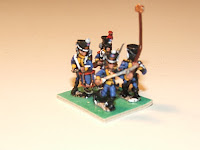 Hesse-Darmstadt Infantry, BattleLine Miniatures, a horrible set of figure but have attemmpted to paint them as best as I can. Base needs completion and a standard (Most likely a print yourself job from Warflag) 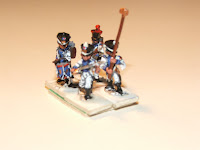 Some Westphalians, horrible battlineline gnomes againt but I did what I could with them. 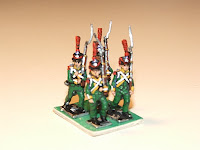 3eme Croatian Infantry Grenadier Company. AB Figures, very nice but very expensive, A lot of people say these are the best, but I think the OG figures I have are on a par (and half the price) 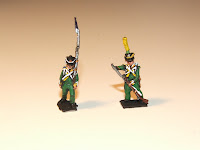 3eme Croatian Voltigeur and Centre Company, I have painted more of these figures but only decided to show 2 of them. 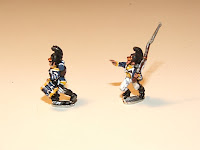 Von Pfuhl’ Infantry Regiment (Wurtermburg Infantry), I picked up some 15mm OG figures (Poles, Wurtenburgs and some Old Guard) to increase my 15mm French. I painted a command element to see how they look and I quite like them, only 100 to go now :). 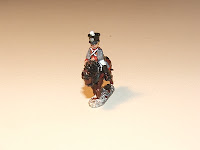 Artillery Driver - Battleline do some cheap limbers so I picked some up. Not needed for games but thought I would have some eye candy. Hopefully my artillery batteries will now actually look like batteries when they move. 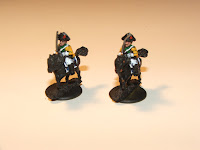 
Duchy of Jaxonia
Thus, I have also entered the realm of Emperor Vs Elector in the forming of my Duchy, rulked of course by Marquess Paulus Von Jaxon (http://jacko-thedancingbear.blogspot.com/).

SOme years ago I picked up a vast chest of plastic figures and have made several half hearted attempts at getting them ready. I dont even know where they all are currently, but I have grabbed what I can and started the project once again !. 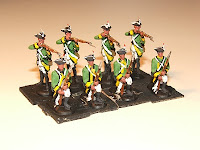 Duchy of Jaxonia Infantry - I painted theseGreen Jackets a long time ago and they look bloody horrible, if I do say so myself. I'll need to some a fair amount of tidying up of these figures as they hurt my eyes to look at them lol. I'll probably end up painting the shade in, but anything is better than this, I think the French figures I painted when I was 13 looked better than this ! What on earth was I thinking at the time. 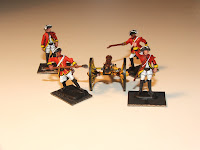 Duchy of Jaxonia - Artillery - I have painted some gun crew and a gun, I thoroughly detest painting guns, I dont know why but I can't fight without them and I was tempted by red coated artillery for some reason. 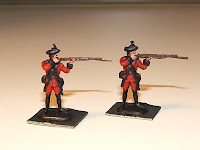 Duchy of Jaxonia, Infantry - Base coated figures and now into applying more layers. My units might be a mix of colours, as I haven't decided yet what to do, or even the history of my nation. Red always looks good on SYW figures, adn I have painted enough white on Napoleonics to last me a life time. 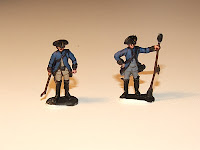 Duchy of Jaxonia, Garde Artillery - Base coated and have begn the next phase of the extra layers, will probably end up being 2 guns only, as the Duchy doesnt have too larger Guard force. I think as a whole my forces will amount to 6 Infantry battalions, 4 guns and 3 Dragoon regiments. I am tempted to create some militia force, as peasants with guns is always appealing :).

The campaign continues after the Xmas Lull, several days ago we fought a rearguard at Tortosa, in which the Spanish attempt to load troops onto the British Navy, while the French harass the rear. As it turned out it all fell to pieces on about move 3 and I find fighting under these rules with Spanish to be getting quite tedious. I know a fair amount about the Spanish army, and I appreciate the obvious quality issues but at the end of the day its a wargame and it has to be enjoyable and recently it hasnt been. I think my incessant whining was probably hightened by lack of sleep (Baby, Earthquakes), overworked (Curse you work)! and my reluctance to try and get some extra sleep when there is a tray of unpainted figures nearby. I guess as I don't wargame as much these days, when you only play one game every month and all you do is get stonked - its gets a little tedious.

Anyway, in Spain the East is going kaput at a vast rate of knots, the centre has been quiet, though in Badajoz the sudden arrival of Junot has increased the excitement. In the NW all sorts of entertaining events are happening as Portugal is once again invaded by the French and our white hearted heros march onwards to Bayonne !