Beware the Ides of August !

General Roundup - I have had issues with my camera as it appears somewhow some settings changed and it took me ages to work out what (Looks like someone has been playing with the shutter speed and other important settings). I have been painting as Barry is organising a 15mm Peninsular campaign to get some local games going, anmd as my 15mm Spanish have languished in a broken state for over 16 years I think it is time I did a great push to get them completed. At the same time I might do a few french units as I also have tonnes of those to do. I get to paint for 2 hours a night usually as the rest of the time is absorbed by work, babies and sleeping.

Painting- I have done a fair bit actually as I finished a 28mm Russian Infantry Unit and a Prussian Militia unit. As the 15mm Campaign has been planned I have surged into the 15mm forces with great endeavor and I have to say I have quite enjoyed it. Its quite odd painting figures now to finish off an army I started 16 years ago. They are mostly the same figures too - They were TTG I think (now BattleLine of NZ) and the Spanish range is actually a hell of a lot better then the rest. I have some Essex Spanish and they are of the same quality to TTG (Of course not in the same standard as AB but very usable) I bought a tonne of Spanish 16 years ago and they have sat there, then I bought some French (expecting them to be of the same mould) but alas the French are rather poor. But I will still paint them up as i) I have them ii)I need new brushes anyway so might aswell finish off my current brushes on rough figures iii) I need some practice and also find paint relaxing.


Pictures
A Spanish Hussar Unit (Unit to be updated when I am at home) and the horses still to be "inked" and finished. 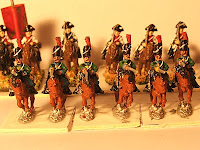 Some of my Spanish Infantry - the left and right flanks are Essex figures, the middle are TTG. Slightly larger than the TTG figures but passable. The back rank are Grenadiers and I have a tonne of them. 16 years ago there was practically no information about the Spanish so I went with what I had and now it appears some of that was misguided. 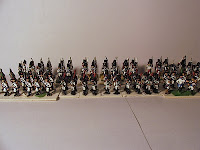 I needed a Walloon Guard unit and decided to use the myriad of Grenadiers I have to make this unit up (They should be in Bicornes ! mostly) - I still have Irlanda,Hibernia and the Swiss to go.

The Cavalry Regiment Reina - I have never painted sky blue facings before and was a little worried at first but dont mind how they turned out. I also need to work out why my sabres are all bent. I suspect a mysterious third party has put something on top of my painting tray. Anyway I also have two dragoon units being done - Yellow coats and lt green facings !(pics to come) 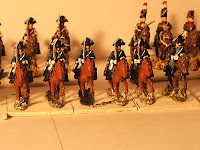 My Spanish Cavalry - 16 year old troops at the back, this weeks at the front. I am in the middle of rebasing the figures as I was tempted by Volley and Bayonet some years ago but that proved to be fruitless ambition. Spanish Cavalry suffered a great deal in the early war due to the decay that beset the Spanish Army but I am fond of yellow coats. 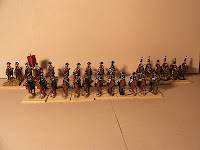 Gaming - None at the moment, I have been having some fairly early starts recently and as it comes to the weekend I have tonnes of other things to do.