Last weekend Archduke Picollo and I met for a game of Hexblitz as get ready for some North African re-fights.

This game was a set piece action where would could get used to the rules again, as well as the moficiations that Archduke had made.

Archduke shall write one of his excellent reports, so I shall just show off some photos(and use it as an excuse to play around with my blog layout). 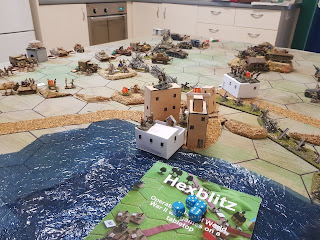 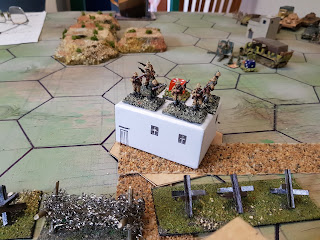 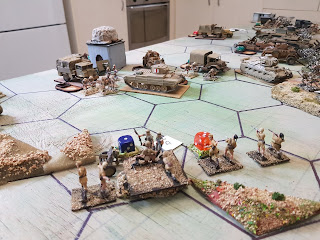 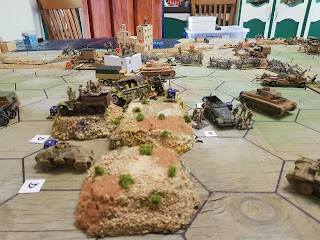 The game as I left it. The Germans still hold the ridge but have lost Halfaya and point 206 (Bottom left) 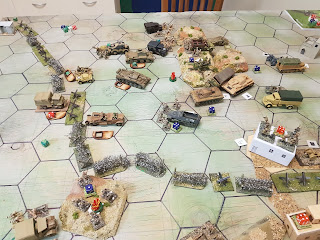 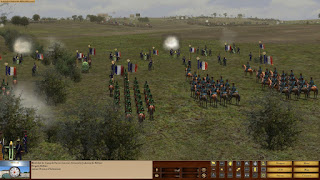 An online review of this game was quite right. Graphics are crap, the terrain is crap but this game is epic if you want to refight huge Napoleonic battles.

So far I have taken some smaller games (Attacking Hougonmont and Holding the line (as Brunswickers) and I hope to attempt a divisional game soon before ultimately fighting Ligny, Wavre and Waterloo.

Fighting WW2 European\Africa theatre - This is a bit like Hearts of Iron but not as granular (You command Corps\Armies with some basic research) not the full divisional\political micromanagement level HOI was. 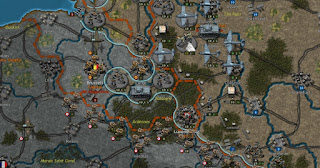 In my game, Poland fell easily, as did the low countries and I managed to just knock out France. Do I take on Russia as historically expected or push through the Balkans and head to the middle east?

I know one thing for sure, the Italians cannot hold North Africa at all.


The WW2 game was picked up after Archduke Picillo and myself played a hex-based Desert War game last weekend (Update to come). I have some travel coming up so it will be a good activity to fill time on the boring business trips I do.
Posted by Jacko at 11:29 AM 3 comments: