All this purchasing of figures for solo games and the fact that all my terrain is sitting on a table far away has meant I have decided to get more terrain. When I say get, I mean make and so I have been on a terrain baking project that is going suprisingly well, and a rather out of hand !

For a Eben Emael skirmish I started by making a Casemate out of some foamboard and a pillbox out of a yoghurt container. The 15mm figure is to show the scale, pretty quickly (and roughly) put together but all the materials were free. Sure I could have bought one of each for $10 but why not get the creative juices going. 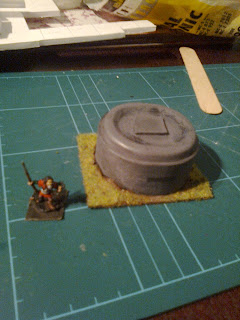 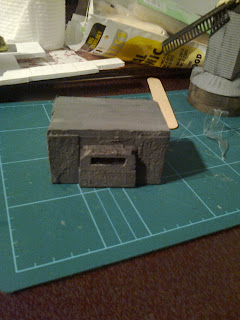 Then I thought it would be a great idea to make some larger buildings for some more ww2 skirmish games. The below are half done, a station house and a storeroom, painted but with most bits needing highlightng - made form foamboard and a weetbix box with a dash of PVA.. I plan to base them and add some Vine\Ivy to hide some of the crappier finish I have done on it. The first building I've made so Im not complaining, but I need to weather them a little as they are seem rather glossy ! 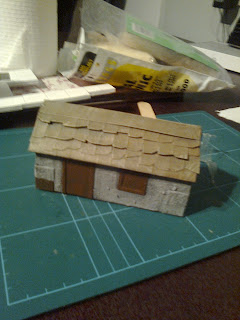 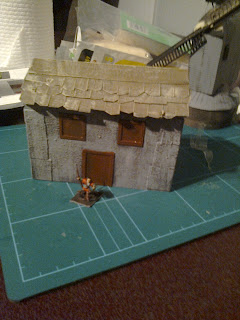 So while I was making them I remembered I had a half baked Airfix Dutch windmill somewhere that I attempted to make several years ago. A quick recce of the shed found the box and so this has been added to the queue. Ive lost some of the bits so I will need to craft some addons to make it complete (Like doors and such) 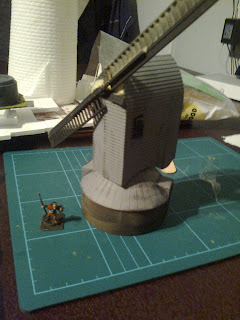 I have two ww2 rulesets I wish to use - Hell by Daylight by Jim Webster, and THW NUTS plus Blood of the Risers US Airborne supplement. HbD is for partizan type games which I plan to use for a scenario and NUTs is well, looking pretty good. The campaign in the US Airborne book is ingenious and the rules strike me as bing very exciting. I have 3 THW rulesets from various periods and I quite like them. of course the US Airborne supplement has 10 linked scenarious for Normandy, and as I have a tonne of 15mm Germans, US and Brit Para's Im going to play these out solo. but of course I need the highlight of all Normandy tables........bocage. The below is a test run I made to see how it would go. The base is some "plastic-iey" stuff that was used in the box our TV came in, cut and PVA'd to a base. Applied some filler, painted it black and then turf colors and then glued varying shades of flock\clump foilage to it, and I am quite impressed at the results. 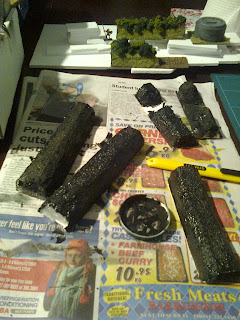 The test bocage ! I have noticed though I have no consistancy between stands, so need to hide some pretty bad join lines if two bases are side by side. 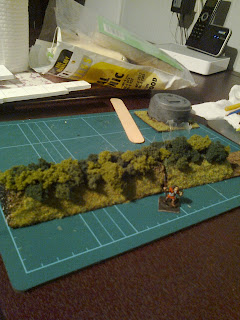 It has been fun, but has taken me a little while to get done but now I know what I'm doing (or not) I can get a bit more done each night. so much done in fact the last hour of each night is spent adding more stuff to the list - barbed wire, dungeon walls etc etc as well as painting more 15mm stuff (ww2, fantasy, napoleonics...)

"Her indoors" has raised on valid question - where am I going to store all that "junk" lol and I dont actually know BUT at least I am recycling.