Roly has placed some high quality images of the Gallipoli display on The Lead Adventure Forum. These are pics from Wargames Illustrated (which I don't buy anymore as its sadly a shadow if its former self). 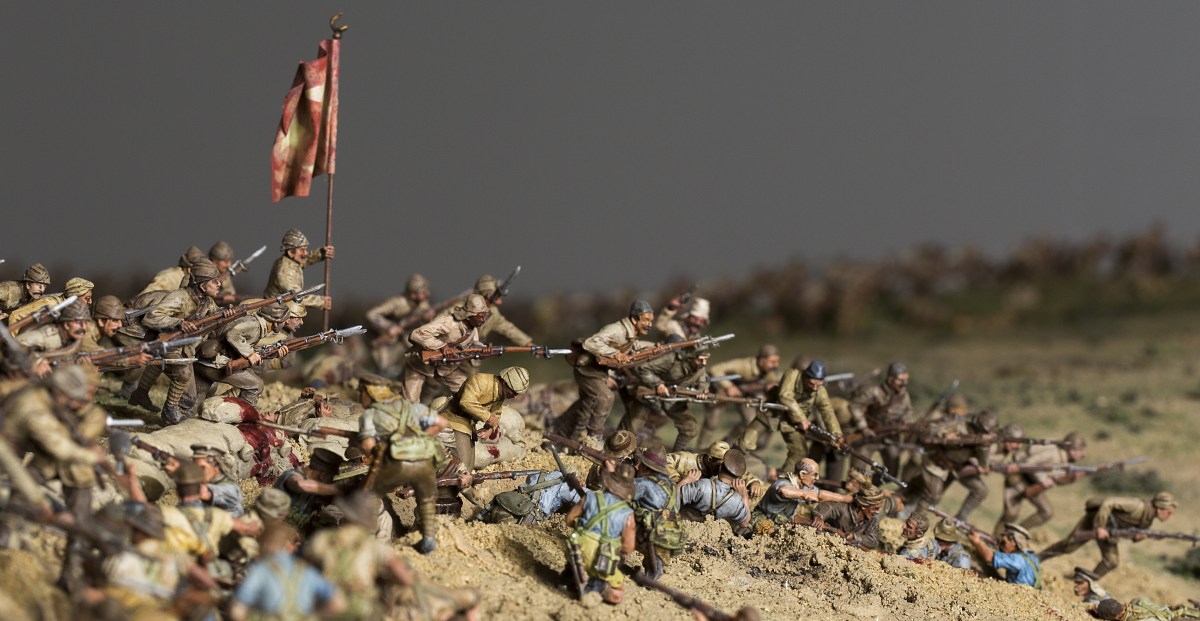 However it does highlight one thing that made me smile, one of the figures I painted right at the front. I must have done one of them good enough then !

I haven't done much this week apart from long long hours of work, though I'm painting tonight and will plan two weeknights next week where I shall try to catch up with the Archduke and attempt another solo game of Rally Round the King.
Posted by Jacko at 2:30 PM 2 comments:

I picked up some used figures some time ago that I tried a different painting technique on. It was painting a base colour and then using a wash and highlight. I've done the wash and one part of highlight and I'm not that happy with it to be honest - perhaps the final highlight and detail (buttons etc) will make it look a bit better. I also had them glued to the base before painting - it was fine for the Airfix but a stupid idea for the Revell figures as I could not get to into some of the detail. 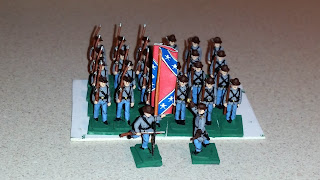 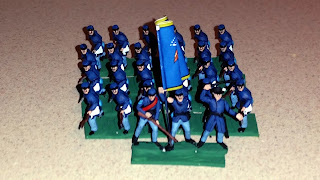 I think I'll go back to either a simple one paint layer system OR a two step darker\light paint job.
Posted by Jacko at 3:29 AM 2 comments:


Looking back at my photos it was August last year that I played the first two battles of the campaign. It was the third battle that threw the thing off balance as I didn't have the required armies ready due to not having enough figures or having them painted.

I've yet to post the first two seasons of the campaign but seeing as I am finishing two of the armies I would  show them off anyway.

Treyine is based on the 100 Years War English so its a very "shooty" army with lots of bows, a few dismounted Knights. I have never painted a Historical ancient\medieval army before so I simply painted what I saw fit (As its only for a fantasy setting). The are based on my older style with paddock style grass and look OK for a fantasy human army, but probably not for 100YW. 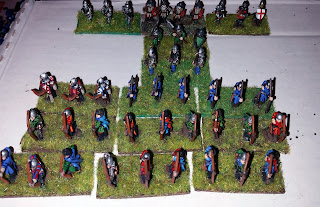 Tropilium
Unfortunately for Treyine, the huge empire next door decided they liked to add their lands to their collection. Tropilium is based upon the Late Roman Empire which until,  I started painting I knew nothing about. I did a little research on shield design and colours and then painted them up over about ........erm......6 months.  The figures are the old  TTG figures so they have seen better days, a few highlights and some new basing have them looking a lot better than what they did previously.

The random dice rolls for army selection saw a large army being generated. 6 elements of Legion, 6 of Auxilia plus loads of Archers and Equites. 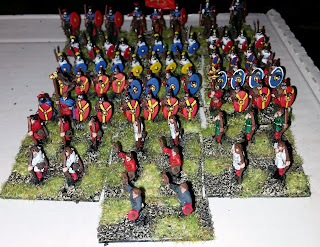 Unless the Long bows of Treyine can keep those blades away I think things might go a little sour in the Kingdom.

So hopefully I will play the game this week and then start posting the actions reports on the blog.

I don't know if i will ever play ancients as a period as such. I've seen a few games being played locally but, to be honest,  the participants don't like overly joyed to be playing. Perhaps its the ruleset they are using or I go and have a look at some miserable moment or when they are having abreak ?

At the end of last year I decided to start playing the RallyRoundTheKing Talomir campaign solo. The published campaign involves a lot more nations and armies that I have so I simply made my own map involving 7 nations. I would have no pet nation but simply play them all for some solo games on the Kitchen table and a little background and action reports.

My simple map is below:

I did initially make a grand hex based map but updating it is a pain so I have embraced KISS. 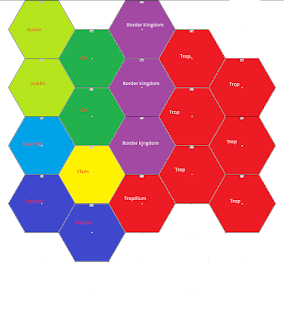 I included the large Tropilium Empire simply as I have a very basic and old Late Roman army. I also wanted to see what life was like next to a large and territory hungry empire so they have started with a large domain already.

The campaign will begin in Spring 271 and the starting leaders are below:
I am rolling the random events to see of bad things happen (Dragons , Giants and the like) but I'm going to ignore them as I please if the event doesn't fit with what is happening.

Last year I did get to 2 seasons in and fought two battles. A third then occurred but I had not finished the army (The biggest of course - Tropilium) so it stalled while I started to paint them ..........and then did Napoleonics.

However fresh paint, new terrain and a better camera have me back in action !
Posted by Jacko at 8:40 PM 4 comments:

Well after some time I finally had a week off and went off to Wellington. All week long it was cold, raining or sleet but that  did not stop us and we had a thoroughly good time.

Top of my list was the Gallipoli display that I painted figures for (Peter Jackson's figures designed by the Perry's). I have seen a lot of pictures of this already but it was a great experience to see the diorama myself and it was epic. It felt good to see my figures in the display and the pics below are of some of them in the masses. 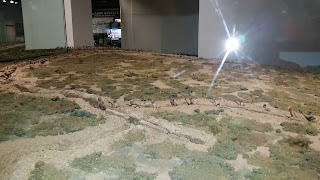 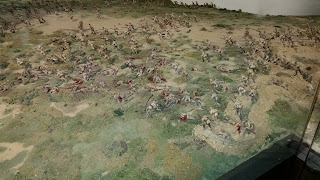 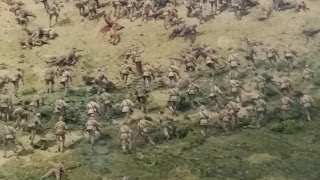 I also popped into Modelcrafts and Hobbies for a look around. Alas the website photo had me enthusiastic but upon arrival I found them in the midst of reducing shop size and running down stock. Hopefully it is more a space issue than profitability issue but I took great joy in rummaging through their sales table. A lot of items 50% off so I did grab an Airfix Pontoon bridge for $13. 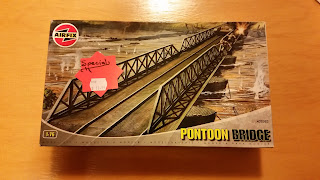 Not a lot happening apart from playing Hordes of Things a few times against Colin. Luckily he lives right near my work so I can pop down easily for some games. It has motivated me to finish the rest of my figures and complete my RallyRoundtheKing Campaign and also rebase my armies from playing in bowling greens. 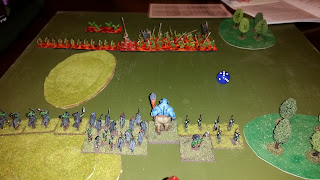