Fell off the wagon.


8 days of no gaming\painting\modelling has finished. Last week I made a last minute dash to get involved in a game at Mr Clarksons residence across town. Its a long way to go after a day of work but my withdrawal symptoms of not doing anything had me beaten.

We played in a small Fire and Fury game where a small CSA force (2 infantry, 1 cav, 2 guns) raced to defend a bridge crossing before a Union force (4 Inf, 1 Cav,3 guns) could attack it. I commanded One CSA infantry and the cavalry, while Nigel took the remaining Infantry unit and the battery. Our opposition were Geoff and Ross. The game was extremely exciting for such a small game and was in the balance for most of the game. The CSA came out victors.......just. My units took a beating defending the bridge but thanks to Ross rolling a never ending list of 1's on a d10 (miss) for his artillery at point blank range they just held on. We managed to stall a Union column attacking across the bridge in the last few moves and it saved my bacon. 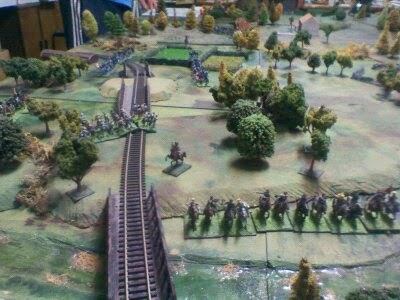 As the midweek boredom is killing me (I don't watch TV, I find its not relaxing at all, and xbox gaming hurts my eyes after a day at work) and most of my lead-pile is in storage I have visited Acorn models and walked out with....... Two of my greatest enemies. Limbers and Horses are not my strong point but it is time to face my fears as as well as kick-start my 1/72 ACW forces again. I have not made a model plane since 1993 and I remember that was a disaster (I was 17 though) so I'm going to I've this one a good crack. I also have some putty to fill the horrible join lines that are always present in model kits and it will be a Tropical paint job (In my version of Sandgelb, which is Dark yellow (Dunkelgelb) as I only have a dark yellow spray can, and no sand left :) -)

Of course I have a box under my desk at work full of some kits so they will also make an appearance.
Posted by Jacko at 1:29 PM 4 comments:

As I have nothing to paint or look at while we are in limbo (I am finding this quite hard to deal with - all that time I could be painting or basing I am instead sitting there twiddling thumbs) I tried a solo Dungeon delve using Goblinoid games Labyrinth Lord.

I have tried several of these so far and they have resulted in the quick death of all party members each time around. But I had a feeling this time around it would be different ( Well I hoped at least)

A chance encounter in the Inn, "The Mistrials Chalice" has led to a local merchant hiring a team of fresh faced adventurers to find out the fate of his brother. His brother had recently entered a (usually empty) dwarves fort to research a book on dwarves mining methods. A half-ling party had been hired but the merchant suspected they had taken payment but then run away.

Sigrid gathered his merry band (as-well as Foromor the Dwarf who's knowledge should be valuable) to enter the complex, find out what occurred and hopefully make some money.

These characters were all created via the Labyrinth Lord character maker (http://truculent.org/llchar/) and selected at Random.

As they neared the entrance they could hear a deep croaking noise, so they steadied themselves for the worst. As they entered the small entrance room they saw several giant toads. Luckily the appearance of the party surprised the toads and they fled the room, some bounding past the group through the front door, while 2 fled through an open doorway.

Foromor scanned the entrance for traps and not detecting any the party advanced into a large hallway. As they entered they were made aware of the shuffling of feet coming from the dark. They readied their weapons and soon several zombies lurched into view. luckily Foromor and Sifrid made short work of the first two, while Aglaia slew another as it rounded the corner. Two more zombie shuffled into attack but were both displatched under a hail of blows.


The party then advanced north to some double doors, and open entering a smaller chamber encountered a party of halflings resting in the room. After some conversations it appeared the halflings had become trapped wedged between prowling Kobalds and the undead menace while also trying to find the merchants brother. Hearing that the zombies were no longer alive, they thank the party and make haste back to town. Hearing the guttural bark of Kobalds, then party ready themselves and burst into the next room. The sudden and aggressive arrival of armoured adventurers, instead of halfling did not appeal to the Kobalds and they all fled through another set or doors. Kobalds
failed morale>

The party continued the search through the complex, most rooms were empty and derelict. The eventually found the bodies of the merchant in the deepest room of the complex. They wrapped his body in linen and carried him towards the entrance. This gritty task was made rather enjoyable by the fact also in the room, hidden in a wall cavity was a large pile of Silver pieces, as well as 3 precious jems (I rolled a 3 on a D100)

At the entrance Sigrid realised that a passage run off to the north, so Forormor and himself (Feeling very emblazoned and tough after a fairly uneventful adventure)  advanced down the corridor and reached the entrance of the last room. The stench of rotting flash filled the air, a green slimy substance and the scattering of Bones of all manners in the entrance suddenly made the two stout fellows decide that it was worth it so they returned to the entrance and the party as a whole returned to the village. 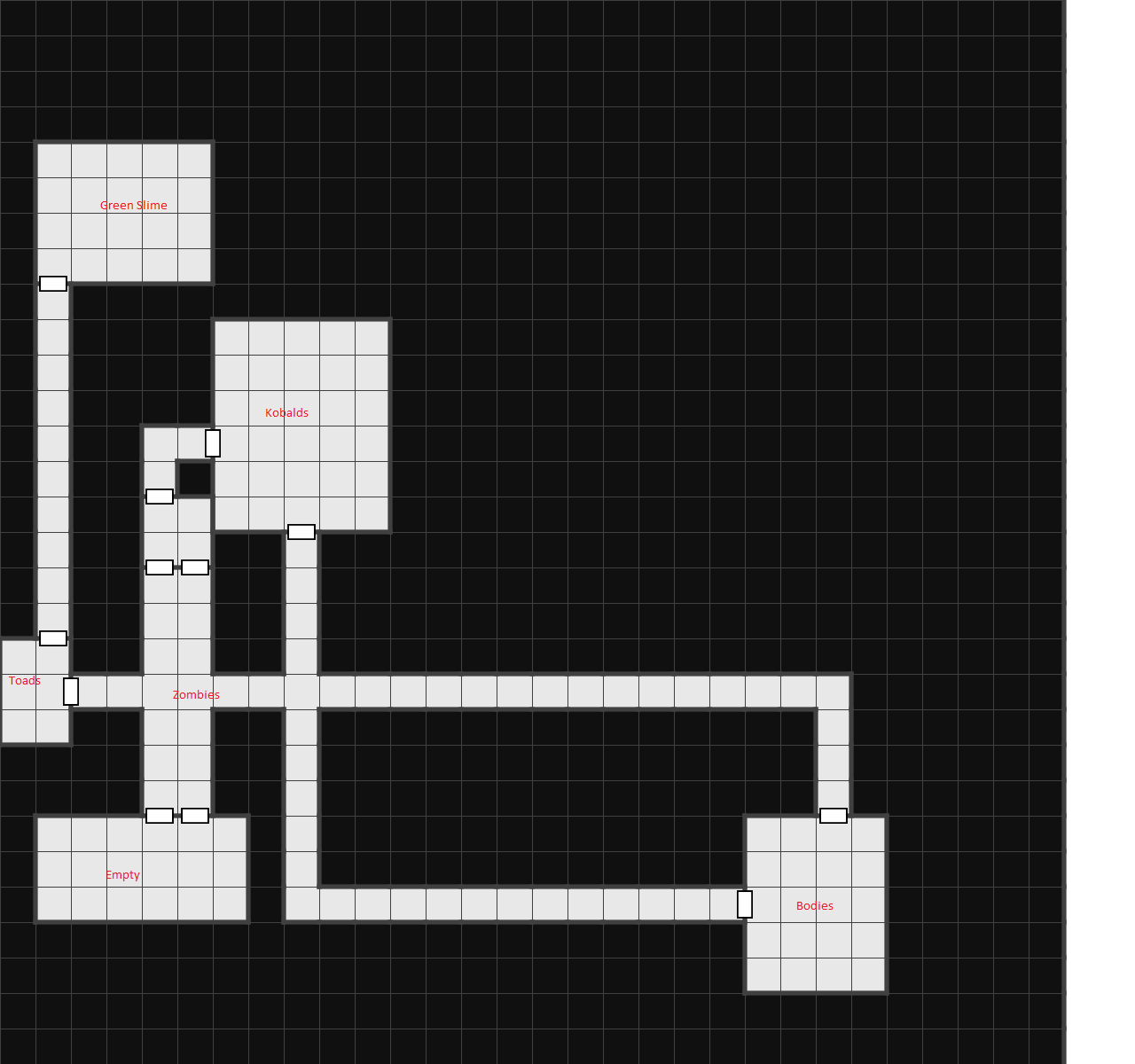 The merchant paid the group for returning his brother for burial. The reward was a a roll on the unprotected treasure table. This resulted in some silver pieces, some gold pieces and a magic item, which turned out to be a Girdle of Giant Strength. This was a magnificent reward as it allows a character to attack as an 8 HitDice monster, with double the damage.

So back to the The Mistrials Chalice for a hearty meal, songs of glory, some ale and thinking about what the party will get up to next (I have a feeling the next adventures is going to get them all killed).
Posted by Jacko at 6:48 PM 4 comments:

All packed up and nothing to do.

So we are almost out of the house and living in Limbo. To add to the joy of moving I managed to contract Food poisoning and spent the entire time ill. As all I ate for three days (Ill and moving days)was 3 bananas so I am feeling a trifle tired at the moment and have come to work for rest

In the spare hour I have a day I haven't done a great deal. The laptop has also crapped itself so I have no internet access at the temporary lodgings until it is fixed (Power supply is toast and while I am a software genius, electrical areas are not my expertise), I have no figures to paint so have mostly been reading the Piquet Les Grognards Rule-set Les Grognards 2 I received recently, playing Xbox Fifa12 soccer and sleeping.

Why Les Grognards and Piquet for Solo?

This rule set I would be using for my solo ramblings so I was looking for a set with suitable Solo\FOG appeal. The internet is a wealth of ideas on how to achieve these, but currently I don't have the motivation to make my own set of solo mechanics so I will simply use a printed set for the time being. I do have an extensive library of solo mechanics picked up from various sources (Lonewarrior, blogs etc) so one day I will make my own. The ruleset is also card activated so it takes a lot of the I see and control all aspect out of a wargame.

I am tempted by the mechanics that SmallWorldProductions posted some time ago using counters for a solo campaign to generate battles using the rules he mentioned, as well as adding my own (Random events\Rebellions etc) to get some solo games going, simply to test out my mechanics.

My main aim is to be able to do  a solo peninsular campaign (or part of it - 1808) and the British "brought forward) invasion of Denmark in 1807 (It was in 1808 but I fancy the Cuesta's Spanish being there and on the French side). These games I can just do when I feel like when no other game opportunity exists.

I'm an avid fan of Tabletop Diversions solo dungeon campaign. When I started Historical wargaming in the late 1980's I never saw myself doing D&D\RPG but I have used Labrynth Lord myself for simply playing about and quite like the ruleset (they are very long though). Though my own dungeon delves so far have resulted in each party being wiped out really quickly !

As we are living with the in-laws I now have a bountiful supply of baby sitters so I plan to get some actual gaming going as well hopefully.


I have painted a lot of figures this year - mostly 15mm and 6mm. I haven't  done too much gaming, a few games at the start of the year plus some odd solo games on the kitchen table. I've also been sick for a great deal of this year, and also travelled for roughly 2 months for work which has really caused me all sorts of grief. However, as I spent 6 months not doing anything at all game\paint-wise as I really enjoy painting figures I should count my blessings.

I need Goals as I've been in a bit of a drought, a bit like West Ham - wandering aimlessly through the year only talking up big but suffering humiliating defeats to Fulham.

Oh and some terrain would be good.

What's the common theme (Apart from OCD\ADHD with a splice of Hording )! - Napoleonics - I simply love it and have armies in 3 scales. What a nutcase !

The amount of time I spend painting I firmly believe that I can complete the above - I average 2 hours painting at least a night.

My biggest issue has always been space, as currently I have to unpack everything and repack it at night (So little hands cant get my "pretty horsies" and "daddys little men") and this takes time. Hopefully soon (As we are homeless in 2 weeks for a month) when we have a new house I can have some decent space for a game as-well as to leave things out. I have not rebased the 28mm Nappies as it would mean getting them all out, glueing them and then putting them all away in one night - I simply havent had the motivation to do it !.