Winter is here and thus starts the long run of colds and other illness that haunt or house. I swear my health has decreased since all these fecking earthquakes started as I'm just sick all the time. Of course a snotty 2 year old doesnt help :) I've been off work now for 3 days, was ordered on bed rest and am pretty much sick of it. Now that whinge is out of the way, I did get to spend some time at home with my daughter as well as paint some figures during daylight hours - which is a bonus.

I have finished another Prussian Heavy Cavalry unit. Apologies for the photo quality, I seem to have lost any skill for taking photos. I blame my constant coughing ! I also need to touch up the horses as I havent done much on them. 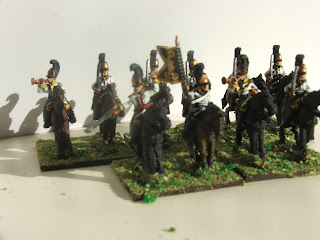 A new Prussian Line infantry unit, again in my rush I forgot to paint the buttons on so another touch up needed. Ive yet to detail the base and flock it etc, as I tend to do basing en-masse and wait till I have 5 or so units to complete (Just because its a pain to get all the stuff out). 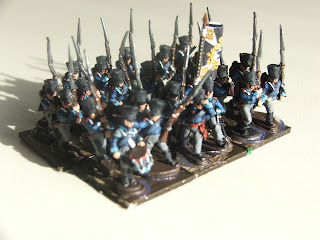 Some 15mm SciFi finally, I picked up some Old Crow Resin vehicles for my solo SciFi skirmish stuff. Below is an APC that I have base coated and "inked", so hopefully I'll do some more layers and then weather it a bit. 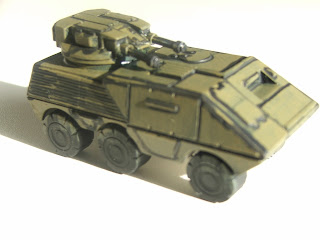 I am also building some ruins, as I was kindly given some scenery for free when I purchased a second hand castle. The owner was moving away and gave me a lot of stuff he didn't need (Paint and scenery) so I'll make good use out of it. These are GW ruins but I plan to use them for a ruined European church. I'll add some detail to the clear area, perhaps a statue or tomb or sorts. 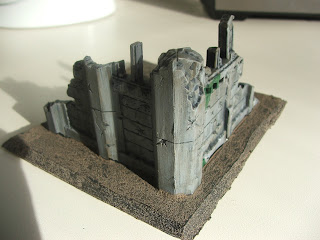 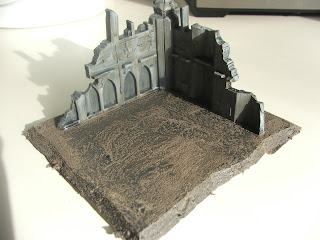 And the Zvedza castle - jeez this thing is massive - its for 1/72 so I can use it for 15mm (For a Citidel), 1/72 and 28mm. I've grabbed a tower and 2 wall sections to start on, but I won't need the entire kit done, but hope to  have a few towers and 6 wall sections for gaming. So far Ive done a some layers and all it needs is a final light drybrush, and some detail painted in (I plan to add some Ivy aswell) 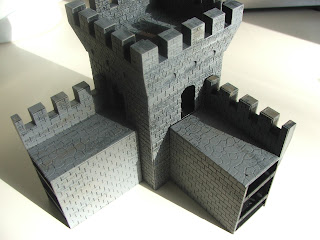 The toaster in the background gives some idea of scale. I didn't really need to buy it but I couldnt resist !. 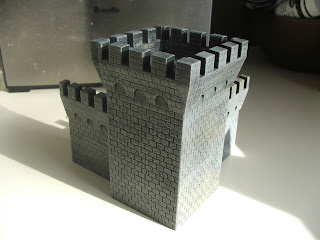 The campaign in Prussia is off and running, King Frederick Wilhelm III has stayed true to Tilsit and has moved troops to support the French in giving the Austrians and British a damn good thrashing.

Yes its not historical, but it will lead to some damn good games. Our first battle is Harburg, where a Prussian\French garrison is abruptly interupted by a British Division, well not interupted as I knew they were coming. It was a bit lopsided numbers wise (4 Inf, 3 Cav, 2 Guns against 12 inf,1 cav and 2 guns), and no one expected the game to last a night BUT showing true tenacity the allies (French\Prusse) came out biting and we are going into our third night of gaming. Of course I forgot the camera batteries the first game night !

Some pictures of night two ! Below is early in the game, the British have advanced and the Allies have sensed an opportunity, the Silesian Uhlans roll over some british batteries and the left flank surges forward crushing all before them. 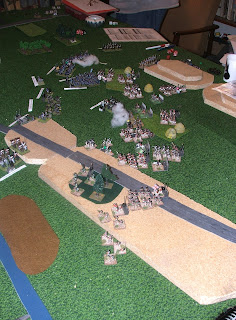 The next shot shows a closer view - british square cower as Prussian troops surge onwards - For Glory ! For the Fatherland ! 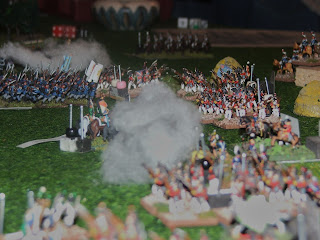 But after that intial surge we needed to reform our lines, so back we went and reformed, a solid line of cold steel and big guns. 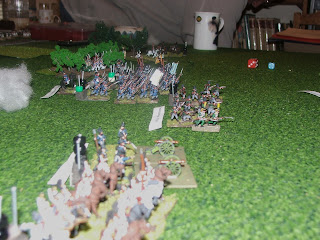 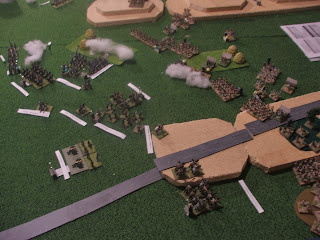 Some more action shots, East Prussian Heavy Cavalry await a chance to get amongst it. 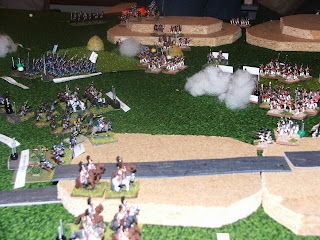 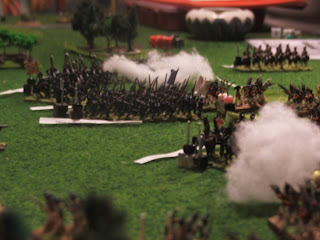 And with most games, smoke is everywhere - in VLE smoke does certain things to firing so it pays to make the first volley count. 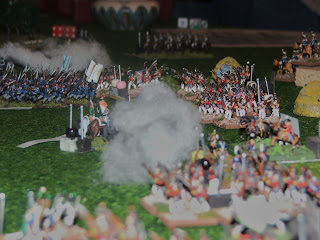 More to come - will Prussians hold, will the french actually fight ! Night is closing and the British dead are mounting - Bring me Night or bring me Blucher !
Posted by Jacko at 3:41 PM 2 comments:

A brief update - I am still alive but I just havent had a chance to update anything. I have a new job and its pretty full on and I am just finding my feet, but its been great so far and is very exciting. Over the last month I've really only painted one 15mm Prussian Cuirrassier unit and I cant take a photo as its on Barry's games table as we have a game to finish on wed.

One thing I can say is how fantastic is a Napoleonic game when the table is crammed with figures !. Painting the figures (for me anyway) is extremely enjoyable, recently I've received some great comments on my figures but seeing them on the table is also very enjoyable.

I havent even had time to read other's blogs which I updated myself with last night, whilst trying not to play Europa Unversalis III on the PC. I also purchased 120 trees from Hong Kong that I am basing up for our gaming as we seem to have a tree shortage.

So this coming few weeks I intend to get normal painting service back on track and pump out some more:

i)Prussians
ii) Normans
iii) Fantasy figures for solo gaming - none of the GW crap - 15mm all the way.