It turns out that I may have had my first wargame in one year on Saturday. I am sure that I have had more, but in fact I have only had one game. What a depressing thought ! I suspect while I have talked about war-gaming this may not have been the case but this has been one of the reasons for my recent change in focus in the last few weeks.

Geoff kindly organized a 15mm game at his house and I took part on the British side (Fighting my own figures no less). The French\Prussians (Geoff and Andrew) held a ridge-line with a steep escarpment which we (Ross and myself) had to somehow assault.

With my typical dash and bravado off I surged forward however it was not until later I realized that I made a very serious error, perhaps one of the most basic. While the escarpment could be handled I negated, in my enthusiasm I suspect, to check what the right ring of the British Army was doing. While I raced forward in column to assault the hills, I did not notice the right wing was advancing in line and also had a river to cross. This can be seen in the below showing my forces racing ahead. 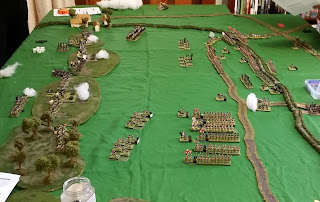 This left a conundrum as I had advanced too rapidly but needed to tie down the flank while waiting for the other wing to close up. However, up the hill we went but alas, my dice rolling was not that great and while I did knock around the French to a small degree I simply took a pasting. By then the right wing had descended but was easily repulsed. 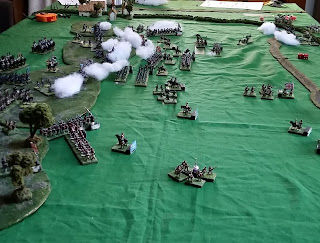 A good game though and nice to be back in action. I suspect I shall sell my Prussians (and 28mm Russians) as they simply are an odd fit to the forces I have (Peninsular).

While I was there Andrew showed me his laser cut and hand crafted fleet for Lepanto. Seriously brilliant modelling and painting, these ships were magnificent and photos do not do them justice. 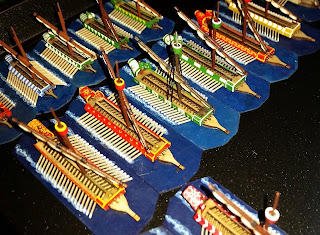 At a snails pace I am progressing through these plastic figures and I have enough now for some skirmish games. 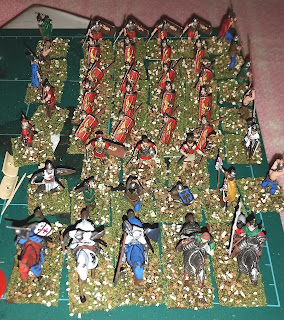 The above are a mix of Romans, Britons, Knights, Huns and Saracens and once I finish some more I shall have some little games to keep my self entertained.

Apart from that I am getting rid of a lot of stuff  (6mm, 15mm) as sanity has prevailed !