What is happening at the moment. Not a lot, I seem to be suffering some sort of nervous twitch in my left thumb which makes painting and holding figures steadily almost impossible. I did try however, but I would go to paint an Ansar’s rifle, twitch just as brush bristles touched led and then end up painting brown on his clothes. I had to revert to basing  (for spraying) and  undercoating new figures and painting the base coat on completed bases but based figures suck up a lot more space than when they are new in a bag so I’ve actually run out of storage boxes. There has also been some grumbling in the camp by my civilian camp followers about the space I am taking up in the kitchen, and I have been warned that a mutiny may occur.

Before the dreaded twitch I was going all out to finish my 15mm Zulu and Dervish armies and I made some headway, but alas I am now laying low until I can’t paint twitch free again. The Dervishes are Peter Pig and they are such a nice figures, I  whinged to myself that one of the figures had flash on the front and back (I’ve never seen flash on a PP figure before) so got out the old knife and pruned away. I then decided to engage my brain and realised as this particular tribesman was nude, then perhaps the “flash” at the front was actually his crown jewels and so I only pruned the flash at the front. I guess I just assumed it was flash and didn’t really have my 15mm figure penis check mind set on.

So I am currently just reading blogs and doing paperwork for solo campaigns I intend to run. One of those campaigns is to redo my Jaxonia Ubongo campaign as the last time I did it I seemed to have tremendous luck. On rereading the rules I found I had made a few mistakes and left out jungle encounters completely, but as I now have a bag of Jungle animals from Irregular Miniatures it looks like gorillas, crocodiles and various others beasts will also pray on the poor soldiers.

Its pretty boring with a twitchy thumb !
Posted by Jacko at 4:36 PM 3 comments:

So seeing as though have a tonne of stuff painted but not based properly I thought I'd spend the next session sorting some of this stuff out. First off I found the 28mm Russian 1812 Horse Artillery, filled my paint tray with dark brown and then proceeded to drop the first figure in head first - %&$^&!.

Then I did it again (%&$@! x 2) and gave up on the Napoleonic as I needed to clean two figures and it gave me the hump.

So I have based the first four bases of the 29th Pennsylvania. The standards are in the post at the moment, and when they arrive I will finish the pole as well as sort out Officer and NCO chevrons etc. I've gone for a plain old grass scheme with a few weeds and clumps of brush, typical sheep country !. 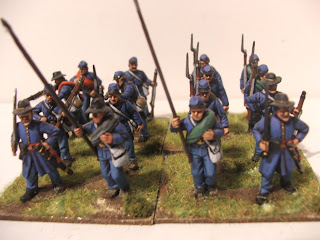 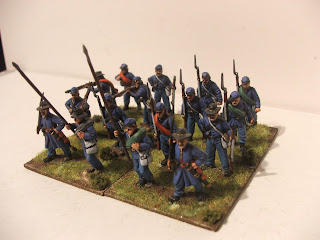 So I have another 20 figures to paint from the first box and the second box to go.

I then moved onto a 15mm Rally Round the King Army - Altenguard (basically based on 100YW English) - lots of bows, a few men at arms and a commander, I based the Brethren (Religious Paladin types) Knights as well as for some reason they were in the wrong box. 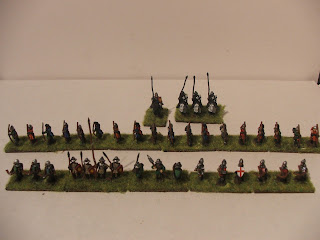 I also noticed that the spears\spikey points all need fixing - yay. I also need to adorn the pike with a standard of some type. 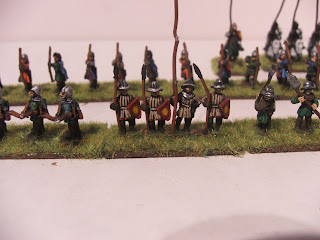 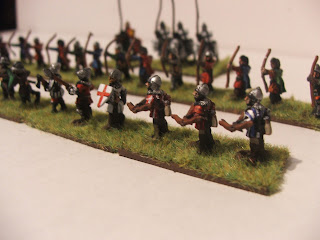 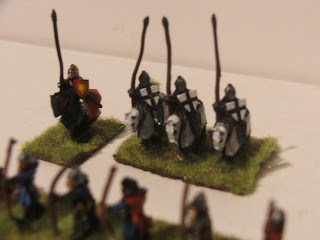 Unfortunately I was a bit robotic now and accidentally based 3 Goblin Archer stands in the same grass theme so I called it a night there as I wanted to give them a rock\cave based theme. Looking at the RRTK boxes I have the following to finish.

If less is more, then more must be awesome.

So onwards and upwards. I have been quite busy on the painting table, but rather lazy taking photos.

I have started to paint the bases of my 20mm Japanese, and then realised I have never done jungle bases before so will need some different decor. This is quite good timing as I need some tufts and flowers etc to make the lads below look pretty on their bases. The figures (16) are only 60% done as I still have to add the final shade\highlight layer, blanket rolls, brass n boots and head wear to go. The faces will also get a slight wash in some places, especially elephant man on the far left hand side.  only 56 to go :). My blues are quite light, but I'm happy with it, I have spent some time in museums around the USA in my traveling days and that good old blue uniform did vary considerably. I spent a lot of time in Alabama too over the course of a few years but rue the day I didn't buy that kepi in that trinket store. 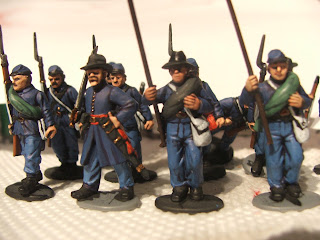 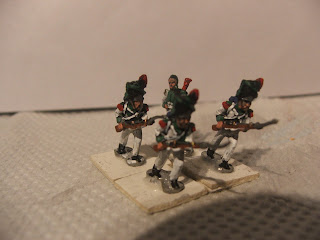 So hopefully I'll bash out the rest of these Unions lads over the next few weeks, and I need to finalize my Peter Pig order. I've often wondered why he never seemed to advertise specials, but now I seem to have been in on a lucky discount draw and have got a hefty discount for one order only - HUZZAH !
Posted by Jacko at 1:26 AM 7 comments: