House move is on the go so Im not up to much at the moment. We'll be in Limbo for a few months (House purchased stopped after building report) so not much will get done. Hopefully new home )once found) will have suitable gaming area\space for me to not be like a gaming hobo and have to put away stuff at night.

Please note
i) Real Estate agents are usually lying bastards
ii) West Ham are still shit. Every year its the same - Relegation from the Premier league.
iii) There is only so much chocolate I should eat at xmas.
iv) Another relative has passed away in the UK - Getting itchy feet to go back.

A while back I did a 15mm refight of  (Balin Tomb) using Song of Blades and Heroes and it basically devolved into a mickey take  of Lord of the Rings movies.

**SPOILER ALERT**  The report below is a complete non event so don't read below unless your bored.

As I have now had my "Hobbit fix" I shall complete a few comedy re-fights of parts of Lord of the Rings and Hobbit 1 & 2 movies for the laughs.


Amon Hen is a scene in the movie where Frodo decides the Fellowship is cutting his style and that Sam is going a bit "Brokeback Mountain". Aragorn gets a bit emotional but then they are attacked by Orcs and a big fight is viewed.

The movies has the following fight - Aragorn is up against 30+ Uruk Hai.

So I thought I do the same - Aragorn (Ral partha) vs a load of Orcs. (15mm.co.uk). 30 or so Orcs all in a line waiting to get a piece of the actions. All yelling "FIND THE HALFLINGS" with a great gnashing of teeth and stomping of feet. 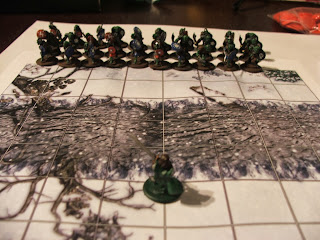 Unfortunately in the first game the Orcs activate in large droves and swamp Aragorn. A little like the movie I guess as he did charge into them. 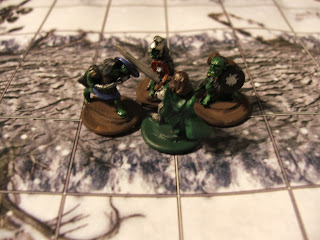 However more orcs activate and it is starting to get a little dicey (The orcs can just reach Aragorn but don't have the ap to fight him) and he soon has three in-front. 3 quickly turns into 5........I can just see Aragorn trying to get Peter Jacksons attention to yell cut. 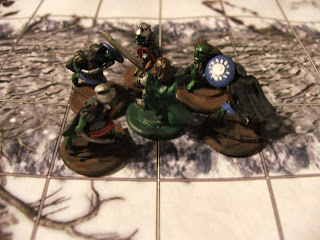 Oh Dear. Aragorn activates and attempts to fight - He rolls a 1, the orc rolls a 6. As Aragorn is surrounded by 4 other combatants he gets a -4 a total result of Aragorn 1 Orcs 10. The result is the orcs at least treble his score which in SBH means a gruesome kill (Envisage Aragorn basically getting butchered in little bits). Its one thing about the Tolkien movies, the horrible beheadings and deaths are only shown for Orcs - the are so discriminated against so I guess some Justice for orks has occurred.

Peter Jackson is not happy.

So I roll back to when Aragorn (The joys of directing) is attacked and I decide to make him flee. That was the rest of the game - he simply legs it away from groups of Orcs, Gimli (AND MY AXE) ad the walking Pantene advert Legolas arrive but don't do anything apart from pop a sole orc who is brave enough to have a crack. 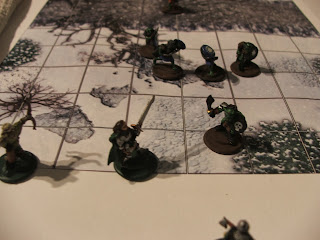 In other news I have been busy painting some WSS figures and have finished my figure for Colonel Barry Taylor, who will lead the fictitious Spanish Foreign unit "Herzogtum von Rechburg" for my Spanish "Amansa" army. I loved painting this front rank figure but am entirely annoyed at the varnish I used as it seems pretty crappy. There is something about a painted 28mm figure that is so appealing, I added some standards to some test figures and they look great so maybe I'll try to get some more done. 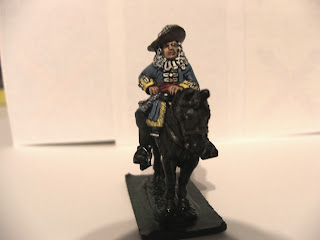 I won't mention the 6mm Sudan and Zulu armies I also finished :)