I recently was pointed to a blog regarding 20mm WW2 tanks and figures, this of course then motivated me to attack the plastic mountain in the garage and try and slowly get my 20mm CD collections going again.

When I came back from the UK I found my 1/72 armies stored in my parents garage has been crushed to pieces by some heavy items and pretty much I rescued around 20% of it, these armies were of course 8th Army, D.A.K and a '44 PzGr force. So I popped down to Acorn Models, saw Stan in ChCh and bought some DAK, 8th Army, Italians and Japanese Airfix\italeri figures, I then realised that half of the vehicles I needed werent available anymore so I stored it all and got my 28mm Nappies going again.

About 1500 28mm figures later here I am. Japanese and Italian plastic kits and resin kits are plentiful as are resin  8th Army vehicles that I dont have to scratch build (Badly). So I am going to paint a company of each nation a week (6 figures each) to slowly get things going again and here is my progress so far. 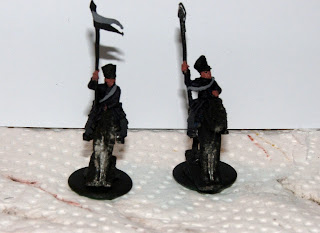 My HQ element of D.A.K half done- those classic old Airfix figures are still a joy to paint. 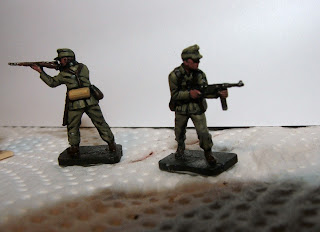 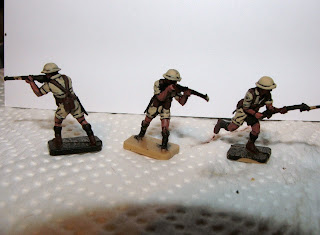 My Japanese Battalion guns courtesy of Italeri kit I found at Acorn models. 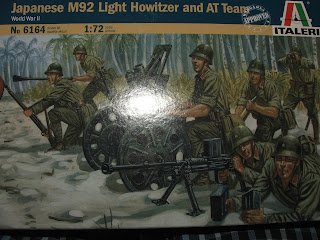 A frontline wargaming resin Britsh Light utility truck. I have painted a vehicle in 15 odd years and it shows :). Base coated, inked and some highlight done but I need to do it again as its pretty shabby job due to painting during earthquakes. 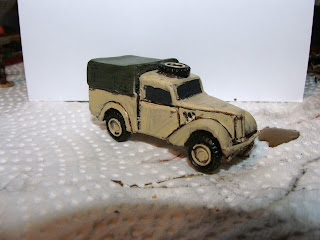 And a game. Hayden and I played another 6mmm ACW game last night using the Polemos rules, an encounter battle that was interesting. My troops were excellent in deployment but when we came near the CAS line I rolled 4 x 1's in 4 moves for initiative which meant I couldnt do anything at all. 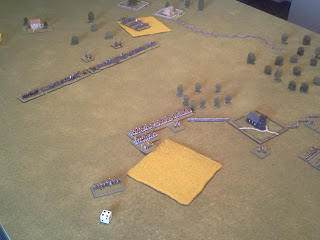 Hope all are safe and well in ChCh.
Posted by Jacko at 1:04 AM 2 comments:

ACW
Last week Hayden and I managed to play test Polemos ACW rules in 6mm at his place. It was a simple afair with a brigade a piece which was OK until I ran into the issue of not being able to move for about 4 turns in a row. If the game had of been larger this wouldn't have been a problem but in the end as my infantry hid in the fields cowering before the Confederates I simply ran out of any ability to really do anything apart from snarl menacingly. I did however make a pincer move with what I had left and hit both flanks ending up in a Confederate battery and Regiment getting hit in the rear and turning tail. But in the end I could barely move those men that didnt want to run for the hills and that was that, it was a good game, the typical slowish game when learning the rules.

The rules have some holes in them but on apart from that they are good, though I did curse my luck at killing Hayden's inept brigade commander who was then replaced by an ADC of excellent grade. Hopefully we will have another, larger game next week and I can get some pics. I have also been making some 6mm scenery so we shall see how that goes. We do plan to run a small campaign to get some games in that arent of the pickup variety.

What else is going on !
I have, once again made an attempt at getting an old project off the ground which is some Middle Earth style skirmishes using Ganesha games Songs of Blades and Heros rules. 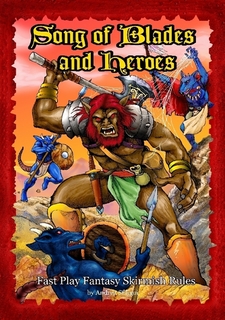 I have been a fan of the Hobbit and LoTR since I was a young lad and to me they are such an exciting enviroment that I can't resist some small skirmish solo games. While I detest Games Workshop rules and "expensive empire" like the plague I have found my 15mm figures, made an order for some more and in the new year plan to have some solo games. I've always been tempted to refight various actions from the books (and now movies) that I thought I would give it a go and its all simply for the silliness of it all. Top of my list are the following:
i) Can Aragorn and Gimli actually stand on a bridge at Helms Deep and repel a horse of Orcs while the gate is repaired ? or true to the book can Aragorn and Eomer hack and Slash their way out ?
ii) Would some warriors and some halflings be able to fight off a goblin mass in Durins tomb in Moria ?
iii) Can mounted horsemen ride down the Helms Deep causeway through several million orcs as the Movie suggests ?
iv)Plus some other general scraps and fights from the Hobbit and LoTR, I do plan to focus on some Moria actions as I'm always up for some Dungeon Globlin bashing.

Cheers
Posted by Jacko at 6:47 PM No comments:

First Week of December.
Its been a very good week painting and I have achieved a lot, I think I have been doing 3 hours a night apart from Thursday. On Thu I was supposed to go and play 6mm ACW with Hayden but Arabella wouldnt go to bed and the missus was a little frazzled so wargaming went out the window (What is it with Arabella and Wargaming nights !)
On the table this week were a number of items, my first 15mm Prussian Old Glory Unit has been completed and partially based. A battalion of Rhineland Landwher and I have to say Prussians are great painting, simple blue uniforms with minimal lace (Chassuers of the Garde eat your hearts out !). 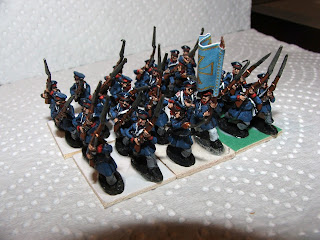 From another Angle, the Standard is a "Flags for AB" version. 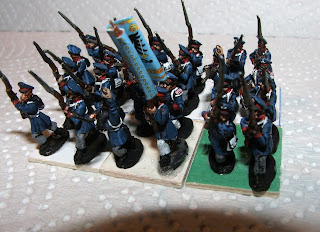 Also on the table are my first Polish unit, the 16th (From memory), they are Old Glory figures again but the Volt\Gren arent very crisp facially. However they have turned out not too bad, though it takes me the same time to paint 3 stands of Poles as it does 6 stands of Prussians. 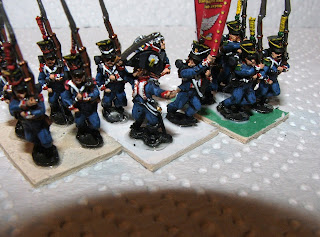 More angles of the Poles. 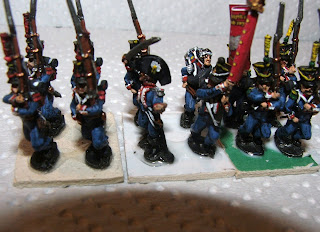 Some prep work on the next few units. Next on my, rather large list of things to do is the continuation of my 28mm French repainting surge, I have 2 Front Rank Dragoon units that need deseprate attention (20 years and earthquakes have them in a sorry state) and at the same time I will paint my Perry Dragoons that I have done some test figures for. Add into the mix a 15mm Prussian Uhlan unit and it should be a good week or so of Cavalry. I undercoated the plastics and lancers this morniing with my trusty Dulux Matt Black. 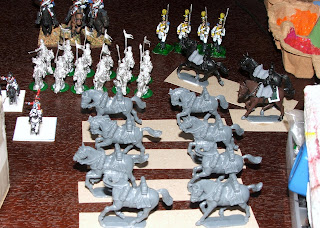 My test figures for repainting my earthquake damaged 28mm Westphalian Army. They will be rebased as part fo this project on bases of four and hopefully will look good again. 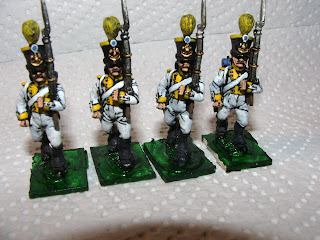 And its those bloody Cuirrassiers again, glued to their base and just need a Standard and some earth\greenery. My fourth 15mm AB unit in 4 months and I still have 4 to go (Do I really need 12 Cavalry units - YES !) as I plan todo some refights. 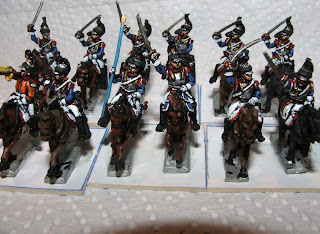 And their big brother, my 28mm Cuirassier unit, the 4th if memory recalls. 20 years old now and not looking too bad though the broken sabres will need some attention at some point. All I need to do on these is add some gold\brass highlight. There is nothing like seeing a 28mm Heavy Cavalry unit, they are BIG !. 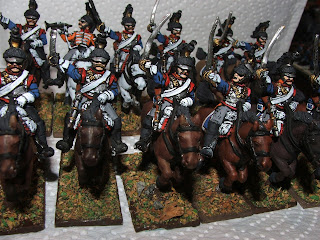