Hi,
Well its been a  good 6 weeks since my last post and things have been a bit topsy-turvey, I had a wedding and some other functions to go to and my painting dropped off. It picked up again early November and then dropped off again as I started playing compter games at night (Baldurs Gate again). As daylight is now longer I have the ability to tend to the potplants and defend them from the ravages of Arabella, who plays with locust like glee on the strawberries and cherry tomatos. 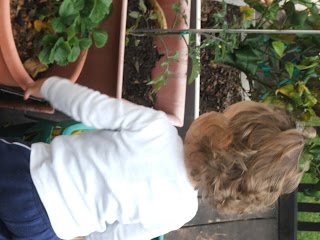 But this isnt a DIY deck vegetable plot blog, its a wargame blog. I have done some things over the last 6 weeks and here are the results. Below some 15mm Peter Pig SYW figures I use for Mabutu (Which also needs a kickstart), My Jaxonians are British SYW\AWI figures as I plan to do some AWI actions in the future. 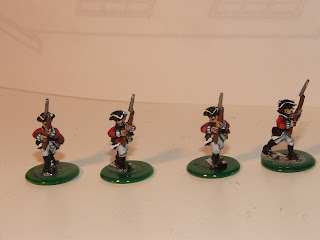 And the major effort this month has been painting 6mm ACW Union troops to play against Hayden, whilst having a beer on some weeknights. The figures are Baccus and are quite nice to paint, mainly as they arent true 6mm but a lot more chunky. My first painted unit is below, flags are those supplied by baccus and I have used a 3 tier shading on the uniforms (Midnight Blue, Prussian  Blue with Flat blue highlight). I have found these rather easy to paint compared to the H&R figures. 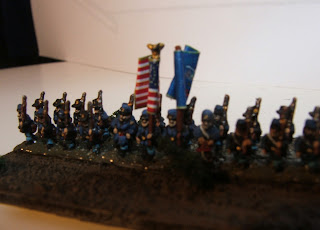 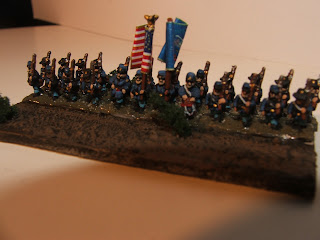 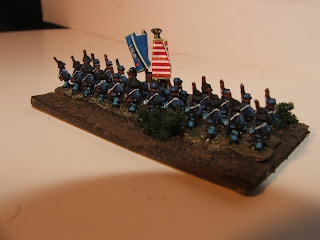 I glue the figures onto ice cream sticks to paint, undercoat them and paint away, but I have in most cases put too much glue on as they are an absolute bastard to get off sometimes.But using this system my painting tray becomes a manufacturing line as I paint 12 ice cream sticks at once. 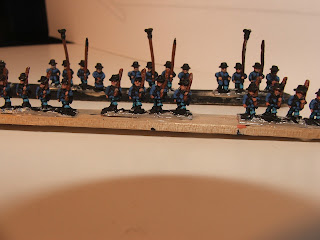 My Zouve unit, I wasn't sure how these would look in 6mm but they didnt turn out too bad I think, I like the mix of Red and Blue at this scale. 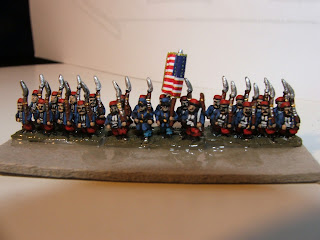 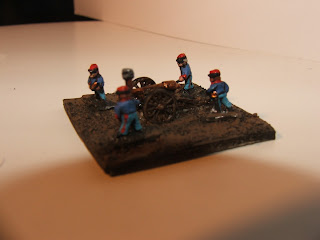 And the unit that has caused me no amount of swearing and pain, The 15mm AB Cuirrassiers. This unit has been the absolute bane of my painting existance, I have never struggled to paint a unit before as I have with these. I have touched these figures up at least 5 times and 3 months later they are still on the painting tray. Finally I am there as I am painting the horses, but I will be glad when this unit is based and ready.
Standard Bearer 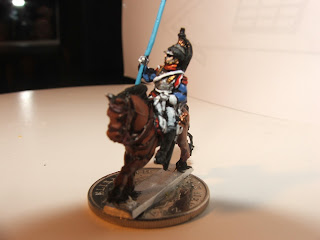 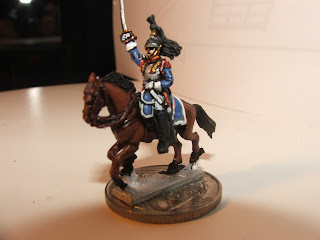 Some more men to join them. 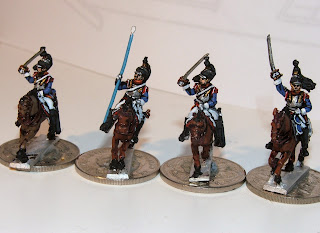 So once this cursed Cavalry unit is done, I plan to finish some more 6mm figures and finish the 28mm Cuirrassier unit I was repainting, after that I plan to repaint a Westphalian 28mm unit and perhaps a sprinkling of 15mm Prussians (or 28mm as I have some todo)
Posted by Jacko at 12:55 PM 4 comments: