Hello,
Wells it mid October and I havent been doing that much as my time is spent watching the rugby and various other leisurely delights. In the last few days I have made an effort to get the Lancers and Cuirrassiers finished and I have made some headway on these. So much in fact that I finished the Lancers.............. 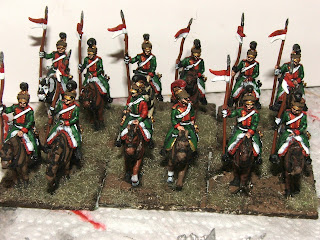 I always have a bugger of a time with lead lances, I can never get AND keep them straight, but I'm happy with the result. I was going to do a lighter highligh level but it made the red a bit pink so I stopped doing it. Horses need a small touch up on things I noticed as I was basing them (I hate horses) and maybe the odd dabble here and there to correct but I am happy with these AB figures. They have been on the bench for a while now and now I can move onto finishing the 15mm AB Cuirrassiers (half done) and the Front Rank 28mm (3/4 done). 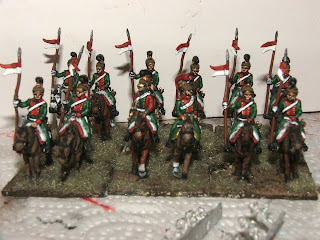 And alas out of the midst of Canterbury comes three new projects, but hopefully quick projects as they are 6mm. My Baccus order arrived and I have started painting 6mm Union for a ACW Army. I used the two gun crews and skirmish stand below to test some paint methods and will see how they go tomorrow (Black undercoat, dark blue, skin, wash, highlight) 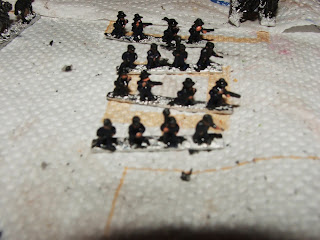 The figures above need to be separated and glued to a temporary base, but I thought I'd test some anyway while the others below dried on their sticks. 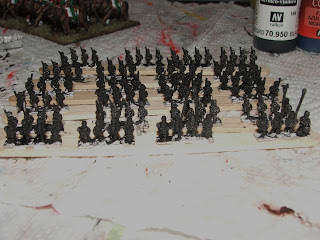 Project 2 is 6mm WW2, I have had these figure for an eternity and I often pick up the odd job lot off trade me. However as I have paid no attention to what I am doing, I have a big mix of early and late war so I need to sort things out and possibly get some more figures. Below are some test vehicles to see how my vehicle painting is these days, the centre JagdPanzer was done using block out while the others I am testing washes. these tanks are 20 years old at least. Of course getting these out has stemmed from my Modern 6mm army that is being planned for games against a mate, I am looking at Cold War Americans - a European Force for 1982 (ish) of which I can transpose most of it into a 1971 Vietnam force. 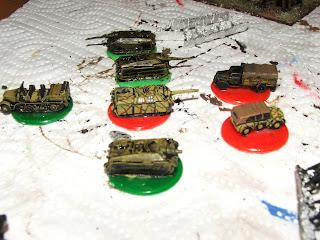