Fletchers about to ruin my fun ! 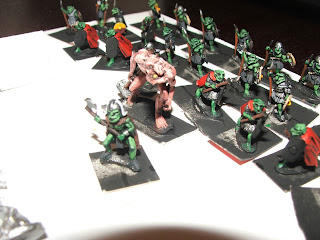 The above (Flashy) picture shows the hordes of Fletcher's painting,piling,bricklaying and plumbing goblins appear on the horizon ready to drive me away from my village for........one to 5 weeks.( The large troll is the project manager about to stomp on a wayward goblin !).
Yes, I can scarcely believe it myself. Fletcher Building will repair our quake damaged home starting in three weeks time.No more blue tarp on the roof and walls, no more plywood window frames and wonky house ! (unless of course they do a crap job) However, it means packing up everything and I wont be painting in that time as we are staying in a motel unit in Redwood. So now I'm in a mad rush to finish what I am doing, pack it away nicely and move.

So to get the mad rush rolling I started to base all those figures I have done in the last wee while. Mostly 15mm Napoleonic Prussians and French|Poles. I have applied my sand "base" which will then be painted earthy tones, dry brushed and then flocked with static grass and other flora.( It was also a reminder that my Cav units are missing Standards). AB French Cuirrassiers in the front followed by Old Glory Prussian Landwher lancers. 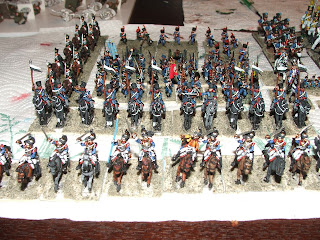 Below is a close up of the 15mm troops -  Poles (Front), Prussian Landwher(Middle) (Both Old Glory), Horse Artillery (rear - minifigs) and Westfalian Hussars (Left - Lancashire Games). My 15mm flags are all from Flags for AB's and they are quite nice. 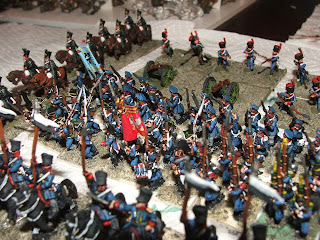 Another 4 6mm Union Regiments for the meat grinder, I think I have done 14 so far so a handy force to game with already. 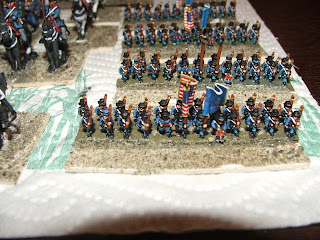 I have found my Box of 28mm Russians and Prussians and have started to re base them (As they had no damage from Mr Shakey), in that box I found 16 unpainted Russian Artillery and 1 6pdr horse gun. I then realised I buggered up the order so I needed to get some more artillery pieces so I have found the Esci guard Artillery 12pdrs actually fit in quite well. So I have started to paint them in Russian colours and I have the base colours done before wash and highlights. Behind the guns are my Old Glory crewmen of which all I need to do is some shading on the black bits and the odd touch up. 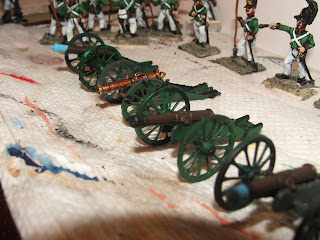 A bad shot my some of the crewmen. The last green highlight really brought the figures to life, thought they look better to the eye than the photo so once I finish the other highlights they should be good to go. 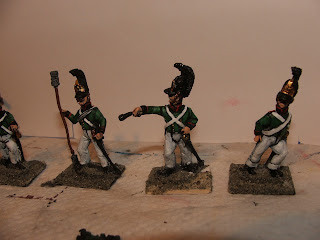 So what will I do for 4 or 5 weeks, hopefully get some game time in as I will be a lot closer to my work and some other gamers I know.
Cheers !
Posted by Jacko at 1:34 AM 3 comments:

I am trudging along with repainting\rebasing my 28mm Napoleonics after the Feb quake stuffed then up good and proper. I have finished the First Heavy Cavalry unit and decided to do three units at once (Well four figures at a time).

Below is my first every lead regiment - a 25mm Hotspur French Line unit. In the throes of being repainted and some new recruits (Off that purveyor of old classic - Richard Shield)  to make almost 2 units. These guys are pure 25mm, the used to be sold by Military Miniatures and after the Designer died (In a car crash so I was told) the Hotspur line trickled away. Battleline Minis sell the medieval range but the Napoleonic molds are gone forever, I for one would certainly love to get my hands on them as the small range is quite neat. God knows why, next to 28mm they look like Hobbits but sentimental attachment is overwhelming. 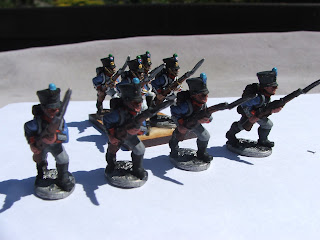 I also bought some wire hand made trees from some chaps in Hong Kong, so I am basing them on foamboard and plan to use them as Orchard trees for 15mm (Or massive trees in 6mm). They are excellent trees and far easier to deal with than Woodland Scenics tree kits 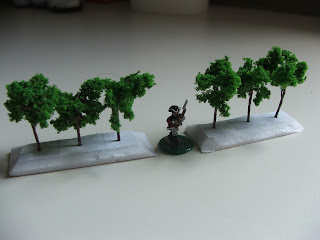 And so another project takes flight from the deep caverns of my demented "ohh ohh shiny" wargamers mind. I have a tonne of 15mm Fantasy figures that I plan to do some solo gaming with for RallyRoundTheKing and Warrior Heroes.

I have a number of Dwarves, Elves, Goblins, Humans and various beasts  to game with (All in 15mm) and I have some good solo games\ideas to come up with.  My games will follow the Fantasy World that the Warrior Heroes\RRTK rules are set in, Talomir. One of the nations is the Border Kingdoms, the human realm that holds back the Green Horde (Orcs and Gobbos). The nation is modeled on Feudal France so the forces I will use are a mix of Saxon and Normans.  My small campaign will only focus on a small part of Talomir, those parts I have forces for, at the moment I am just working out the campiagn hook and some other rules.

So to begin with I purchased some Splintered Light Saxons (and Romano British) and I have glued some shields on below. Not bad figures though there is a marked difference in the size of the RomanoBrits (on the right) and the Saxons (The two on the left). Either it wasnt a good year height wise for the Saxons or the two ranges are different - So Ill make the Romano's champion or Kings Guard figures given their beefy size. 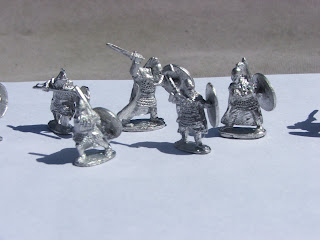 Below is a Alternative Armies 15mm Troll, a nice figure and not the Peter Jackson Hollywood style. 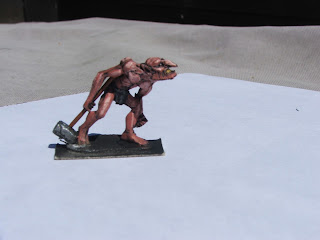 Below is my statue figure, a 25mm Grenadier Elf but I though I'd paint him grey and use him as a Scenery piece for my tabletop. 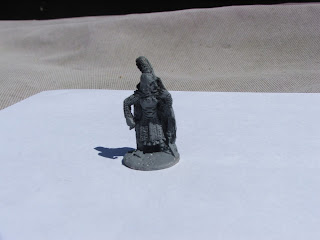 The large scales games are small enough for the kitchen table and the armies are sort of HOT\DBA style armies so it seems very easy to pick up. The greatest asset of the rules is that they are designed for solo play and have a large number of guides and tables for determining non player actions. I plan to use these for my Talomir Fantasy Campaign just to generate some random battles.

As I am also a bit of a Tolkien fan I've picked up a 25mm baby Dragon to do some Lonely Mountain skirmish games. (The 15mm figure is simply to show the scale though I wonder how my 18th Century lads would take on a dragon) 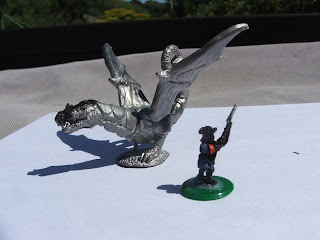 Happy New Year to everyone. I have been very busy recently painting, just haven't been too fussed about taking photos as well as I seem to struggle to take pictures late at night. So a day off today on "Daddy day care" so I took some pictures in the sun (And still struggled due to Arabella trying to grab everything).

I have drafted 5 blog posts on the other projects I have going so I can add more detail as to what I'm doing instead of having one mega post. Todays post is 20mm WW2 ! 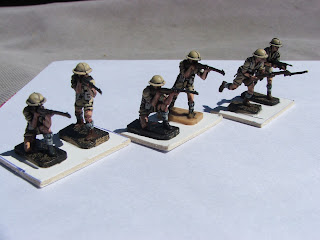 One of my favourite periods, and such a good source of memories from my teenage days fighting Ion - Desert WW2 British, Italian and German (....and Japanese).  Below are some platoons of115 Shutzen Regiment, 15th Panzer Division. A mix of Airfix and Italeri DAK figures. 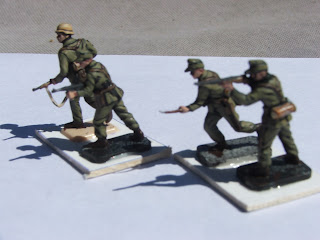 I am painting a company at a time of each country, just to make it varied and interesting aswell and so far it has been fun.Painting plastic 1/72 figures brings back such memories, being 13 or14 watching the World Series Cricket on TV3 while painting ww2 (And most likely high as a kite on the fumes from Humbrol Enamel paints). In the garage I have a large box full of ww2 models (Made and unmade), figures and resin vehicles and I plan to have 5 "Armies" so I will make a company at a time, I have no fixed deadline, but as 1/72 paint quite easily I'll just plug away at them. So on a tray I have - 1 company each of Germans, British, Japanese and Italian and I'll just work my way up.

1941 8th Army (4th Indian Division)- Airfix and SHQ Infantry and a mix of Resin and plastic Vehicles.
D.A.K (115 Schützen Regiment and 1/8 Panzer Bn, 15th Panzer Division 1941. - Airfix, Italeri infantry and all plastic vehicles.
1941 Italian - (60th Infantry Division Sabratha)-Airfix, SHQ and Waterloo Infantry and Resin vehicles
Japanese - I have tonnes of them for some reason so what the hell ! I do have some Americans somewhere, but I've never been to fussed on painting Americans for some reason.

Below some Japanese infantry of the Saipan Defense Force. 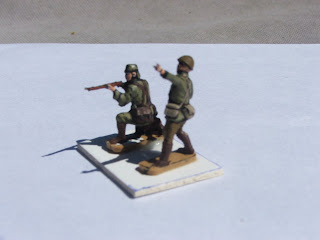