So as there is a possible Prussia 1809 campaign about to kick off I thought it prudent to actually get painting my 15mm Prussians. So far I have done a few infantry units and some Uhlans. Below is the infantry, all old glory 15mm - 2 Landwher and the Silesian Jaegers, as well as a brigadier (slash Dragoon officer). I've made more effort in basing them and realised that brown paint certainly gets used up quickly these days!. Also how expensive is bloody paint, Most of my paints I bought 5 years ago and am only running out now - GW is like 8 bucks so I'm going back to P3 and CdA as I can get it cheap enough from the UK from Maelstrom games - to buy in NZ or Aussie seems expensive. I often think I'm stuck in some wargaming time warp and land every 10 years and everything seems to change lol. 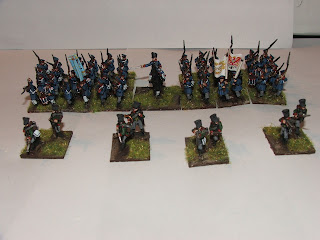 A close-up of a Jaeger stand, quite neat figures and they have loads of personality. I like the OG figures in 15 and 25, I do have Front Rank but they all look the same and after painting 4 of them it gets boring. the OG figures have such personality it makes it refreshing and also amusing when you find the odd figure, like the Wurttenburger who appears to be proposing while looking into sky (OK he been shot but its quite theatrical !) 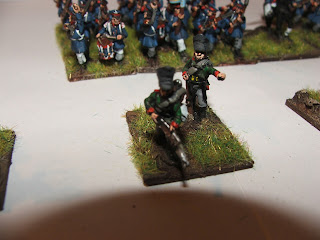 My Dragoon officer in the midst of the militia hordes.. OG packs come in 16 cav figures each when I only need 12, so all the extra figures will be used as Mounted Staff, ADCs and such other stands that take my fancy. 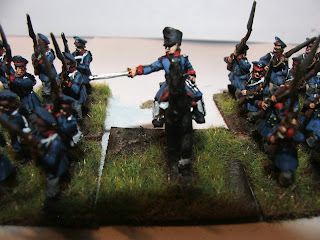 Some Flags for AB standards - the OG packs come in 50 so you dont get a choice as to the command ratios, which is fine however in one Landwher pack I seemed to get 6 standards. I seem to recall the landwher werent authorised to carry flags, but the tended to ignore that order so lucky me. 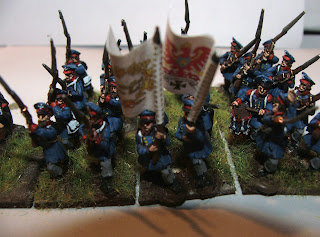 And finally my Uhlans painted a while ago based and annointed with a standard, A Dragoon standard of course to fit my typical "get it wrong at some stage process". I cant wait to a see a good force of Prussians painted - did I really need a Prussian 15mm army aswell as 25mm - YES !. 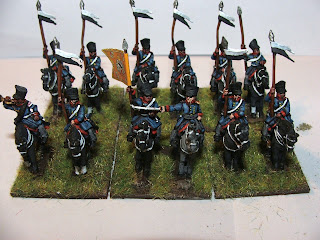 Its been a busy month, Fletchers working on the house (which has been good apart from the bricklayer who seems to be a retard), birthdays, illness and a change of jobs. I have been steadily painting but haven't had a chance to actually base some units due to the garage being overfilled with housewares.

I bought some AB Cuirrassier figures off trademe as I wanted another unit and couldnt face painting them, quite well painted figures but just needed rebasing. Below they are sitting in the sandbox along with a Prussian Line Infantry unit allowing some sand to soak into the PVA. I don't really go in for buying painted figures, but the ease of it all was tempting and I have so many projects going on it would make things easier I suppose. 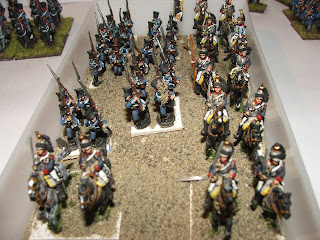 Below is the command stand of the Prussian Regt (Pomeranian I think - I need to find my notes), Old Glory figures and also fun to paint (and easy !) yet I have a few hundred more to go. 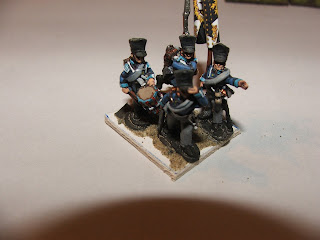 A Swiss Regt (AB figures) after "sanding" and awaiting the base to be painted, highlighted and flocked. I enjoyed painting this unit as the AB figures always look good and I look forward to the next 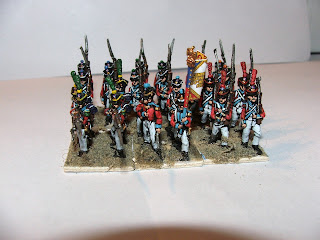 I have a few more posts to come over the next week as I roll into some more units.