My daughter ended up with Viral Pneumonia which meant a few days in hospital, then lucky for me I was then sick over the long weekend with said virus. So finally after 10 or so days off I have got the paints out again. I also squeezed in a game for the Rechburg Dynasty (http://rechburg.blogspot.co.nz/2012/10/battle-of-ulrichstein.html) in which I tried my hand at carrying a positions with the bayonet enforce. The only thing I carried was  a crap load of crap dice - I was rolling 40 odd dice in a turn and was getting maybe 2x 6's, while Barry '6's' Taylor seemed to not get anything apart from a 6. Such is life - I took a chance and relied on luck and ended up with a bloody nose.
Painting
I shall endeavor to finish off these ww2 Japanese, I thought I needed figures but found a large bundle of SHQ 50mm mortars so was able to finish the first battalion. Below a 4 Company battalion, with attached weapons company and Regimental assets (MMG and 75mm gun). The figures are a mix of Airfix, Esci, Italeri and SHQ. I also need to plan how I decorate the bases as it will be jungle themed which I have never done before. 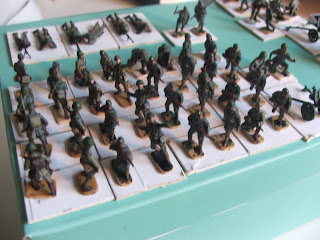 I have split the figures into two types of uniform - a jungle green of sorts and the good old "Japanese uniform\ochre. So far I have only finished the Jungle green outfit, I should have enough for a full regiment (3 battalions) all up and then I can start on the KNIL\Aussies. 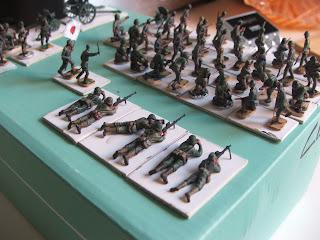 What ho ! I found this stand in my Napoleonics - I cheeky vignette of a Aristocrat and his buxom Friend. I need to sort out my pirates and get some games on (Job number 1000000 in my list of things to do) 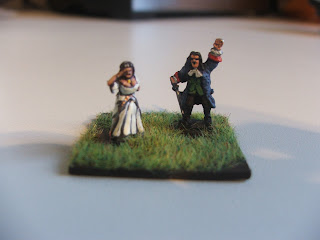 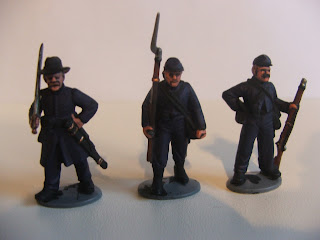 The Rebel Barracks team are planning a 28mm Gettysburg Re-fight next year and I am tempted to join in. I don't plan to have a 28mm ACW army (as 6mm, 15mm and 1/72 are enough !) but I have always fancied these figures (Its those bloody Perry\Victrix Napoleonic that started this) so I purchased a box to see how they fare. Just like the Napoleonic Perry - very nice to paint (of course my Napoleonics are sitting half done after 2 years cough cough). So I'll paint a box for the entertainment ;)

Blogger
I've spent the last 24 hours re-following quite a few blogs that seemed to get wiped off my list when I upgraded to the latest version. It was a pain in the ass but as blogger is free I wont moan too much but it was fun reconnecting and seeing what others are up to(Was also a good reminder to renew my Lone Wolf subscription).

But the new Kaptcha routine is manure extraordinaire. I can barely read anything and I have excellent vision ! but I guess my dated laptop doesn't help things.

Game
On Thursday evening Barry and I played a pickup game to test out fighting in horrible terrain, as well as try out a pint value system for the VLE Ruleset.

I created  a mixed Spanish force based on the First Division at Bailen with highly inflated morale states though. My goal was simple, advance straight ahead and slog it out on the hedgerows, which turned out to be pretty hard. Below is the table, lots of hedges, fences, walls and hills and wonderful 15mm troops of Barry and my own collection. 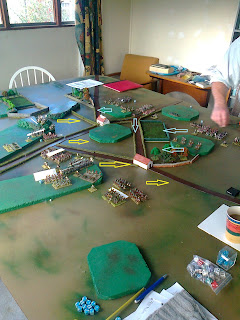 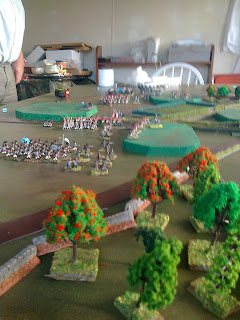 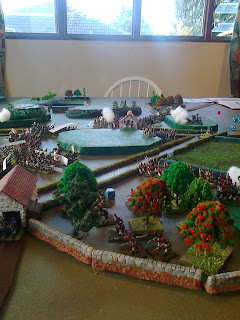 My attempt at a killing blow, I managed to concentrate 3 brigades at one point and all that was facing them was a sole French battalion. Even the Spanish couldn't stuff this one up....... 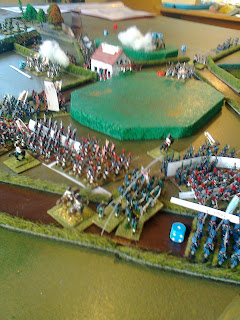 Which they promptly did. We simply couldn't seem to hit anything with musketry\shell so 3 brigades simply charged the French lines. This then prompted some severely bad dice rolling on both sides in which we were rolling 8 or so dice each and not getting a single hit. However a Spanish battalion near the northern farm got a little wobbly, and then ran for the hills. Several battalions around it didn't take this as a good sign and motivation dropped and my attack stalled and then in the next two turns some fancy french artillery fire broke several units and I retreated. All the while it was a good game, attacking bad terrain is difficult but even if you make it you are then a poor dice roller things are not going to end up very well. 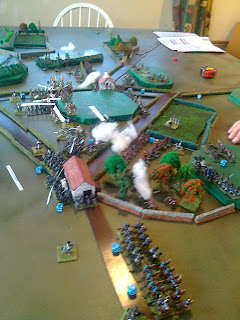 So I was trying to find a hedge-trimmer charger in the garage that I thought was on a shelf next to the wargames storage area and low and behold I find my CD rulesets in a box. I have the good old 2nd edition that I enjoyed for many good years (not that 3rd Ed that no one seemed to like) and a large tonne of figures of various nations that I have stored away for some future date.

So rifling through a few blogs I find some OOB for the Early War pacific (KNIL, AIF and IJA) and I notice that I have all the figures needed for some units. So as I paint the SYW figures up I will do a few ww2 figures at the same time. The good thing about CD in the pacific is that the forces were so small and armour are so rare that I don't need to make 50 odd vehicles for a single game !.

The bad thing is all those nifty plastic Aussies, Esci Japanese are out of production :( so I cant readily get anymore.

While I was looking I also found 28mm BTD Germans and Russians,  some Panthers and about 3 unmade 1/72 StugIII, 2 Pz III that I should really sell or trade as I need to odd infantry gun for the IJA and KNIL.
Posted by Jacko at 2:56 AM 3 comments: