Today saw my 15mm French take the field in 2 games which ( for me at least) were very enjoyable.

Alas after talking about how great my phone is for taking photos I then proceeded to take an absolute lot of shockers - out of focus, shaky and generally poor.  I'm very annoyed as today was an excellent day to play Napoleonic's.  So apologies as the pictures are very very poor but I need to post them !

My plan was simple - Don't stop and attack with cold steel - No musketry just cold steel at a brisk pace moving as fast as possible. While the infantry advanced the ample French cavalry would sweep the flank.  What occurred next I will talk about for a long time !

On the left flank two brigades of cavalry advance with Horse Artillery support. 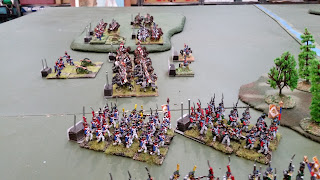 The Veteran Infantry surge past the village of Oblaix with the Guard Chasseurs and Horse Grenadiers in support. My mission was to hold the village - The Guard does not "hold"  !!! 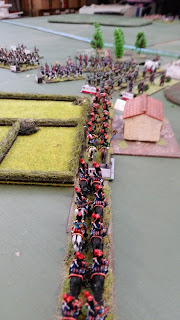 The Horse Artillery deploy and empty some saddles of the British horse opposite, meanwhile the infantry surge across the small stream eager for action. 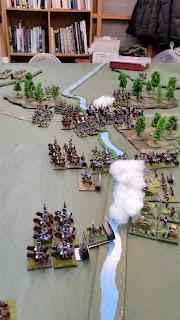 Insert crap photo here ! To the left of these images are 2 Heavy British Brigades of Dragoons. I send in several light cavalry regiments to disrupt their line and make small successes here and there. 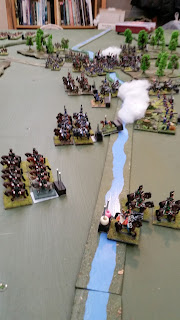 A breakthough ! My Dragoons lose a melee but the British Cavalry pursue only be to launched upon by Veteran Cuirrassiers. The British are routed leaving some tasty looking gaps and unprotected artillery. 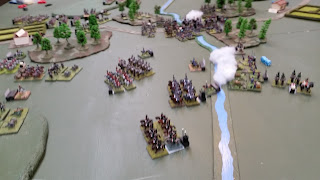 Sensing glory the Guard Cavalry trot out to the flank. French Cavalry superiority starts to impose itself - The French cavalry overrun several batteries and the British forces are soon in peril. Meanwhile in the center French columns sweep all before them. 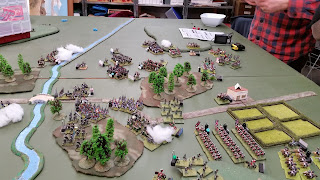 Not pictured.  In an epic charge the Guard Cavalry ride over everyone in their path. Guns, Dragoons, Light Dragoons. In 2 combats rolls all dice were magical 6's destroying British units before them. As a French Hussar unit routed the Horse Grenadiers then rolled 2 x 6's for Morale to see if that effected them. On they surged!

With all the British Artillery and Cavalry destroyed and the French forces charging literately everywhere Ross conceded defeat. Not a single musket was fired on the French side but the French swept all before them at such a pace the game only lasted 2.5 hours when they usually go for about 7.

So after lunch we start another one. Geoff commands the French right while I take the  Guard Cavalry on another Glory hunt. The British storm up the left flank and Geoff prepares a hasty defense - Immediately I sense an opportunity and a plan is hatched - The British advance has no flank protection so we plan to pressure the flank as they are overextended. The French forces march forward with Drums beating and bugles blaring. 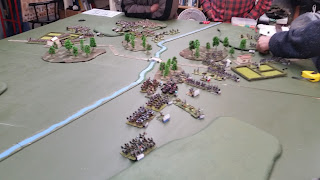 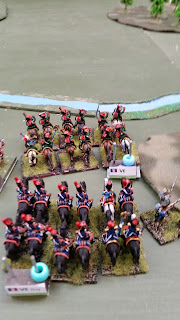 The British left surges onwards while the raw Wurtenburgers get ready for a tough time. 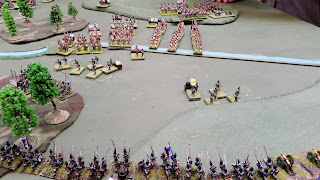 Geoffs Veteran Cavalry see off the British Heavy cav and the line holds yet the British advance continues. Yet as they advance the serried ranks of French infantry move on their flank. 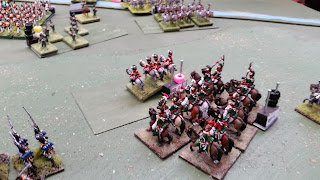 On the left flank British squares form and cannon site themselves to reap carnage on any french that advance on the road between the woods. (Crap photo again) 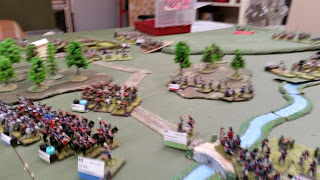 What madmen would ride into such a killing field......who would do such a thing ? The finest horsemen in Europe answer the call.

Sensing a decisive action the Guard Cavalry storm the gap. Taking grapeshot they overrun the guns and smash into the British Cavalry behind. 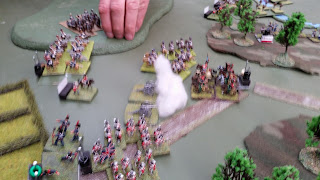 Four sixes in 4 dice routs the British Cavalry and the Guard Chasseurs ride them down. 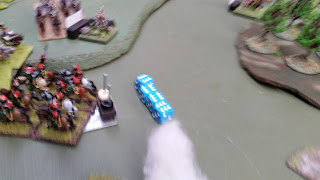 The Horse Grenadiers destroy the rest of the British cavalry and surge into the British rear. 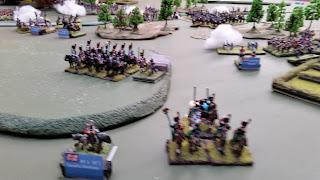 The French infantry close their trap on the British left wing. Advancing into their flank while  Geoff's brave Germans repulse the redcoats with ease. 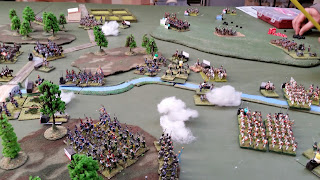 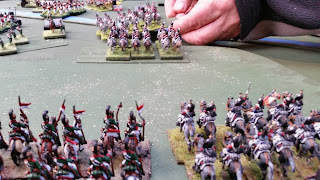 The Guard have punched through the British center and Cavalry reserves pour behind them. French infantry advance towards the remaining British as the falter and retreat. I left at this point while Geoff finished the last load of firing.

The Emperor expects nothing short of a famous victory!.
Posted by Jacko at 2:22 AM

The Emperor won't be disappointed! The Wurtemburgers folded but the Brits were unable to exploit the gap as their remaining cavalry was smashed by the Cuirassiers and lancers. Will see if any of my photos are any less crap and post something at some point :)

Woo. I might be forced to get myself a force of Garde Chasseurs as well as Horse Grenadiers. Great looking games, Paul. When the photos do come out well, they look very good indeed.