Today, Mark hosted Ion and me to a refight of Elchingen, from the 1805 Campaign.

The figures are all Marks collection as he hosted it in his lounge on a somewhat average summers day.

I took on the role of General Riesch, commanding a mostly poor Austrian force defending a ridge-line between two villages. MY forces were all on the table as of the start of the game, whilst the advance French forces would be bolstered on turn 2 and turn 6. The Austrian forces had a single battery, a smattering of Grenadiers, Cavalry and raw troops, with these forces being deployed behind the hills, in the town and on the far left flank.

The orders from Mack, reminded me of a Tarot card reading. Something like, "oh, something might happen, maybe, yes, no, maybe so, mmm yes, you think about that". So, having commanded a Spanish Napoleonic army for 15 years, I decided to what I did best with raw troops, defend, reinforce key points with Veteran troops and hope for a dashing charge to sweep away the enemy at a crucial moment.

The initial Austrian deployments below.  All Austrian troops move forwards, supporting the villages and also making themselves visible on the ridge-line  hoping to draw French into the central position. 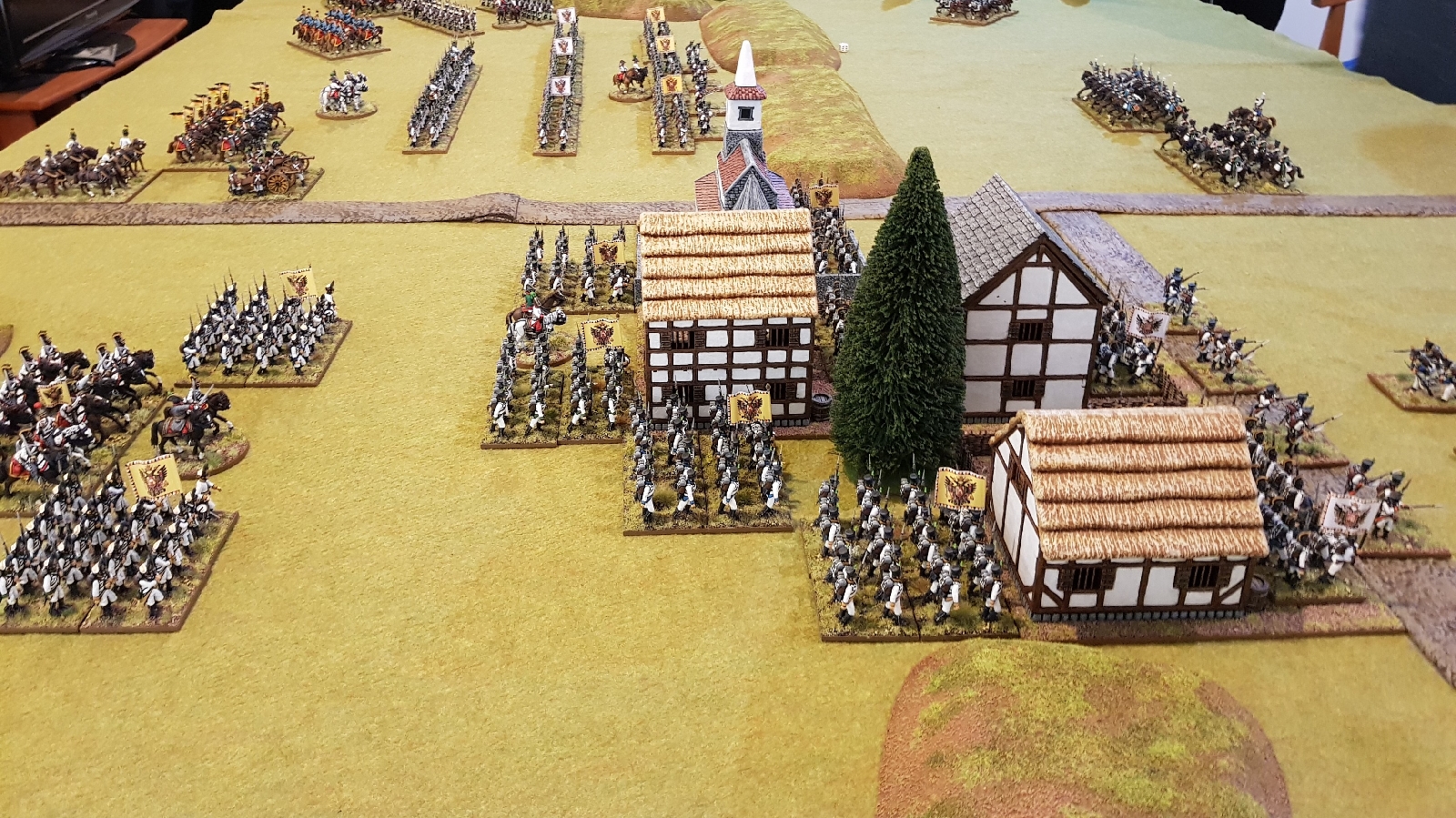 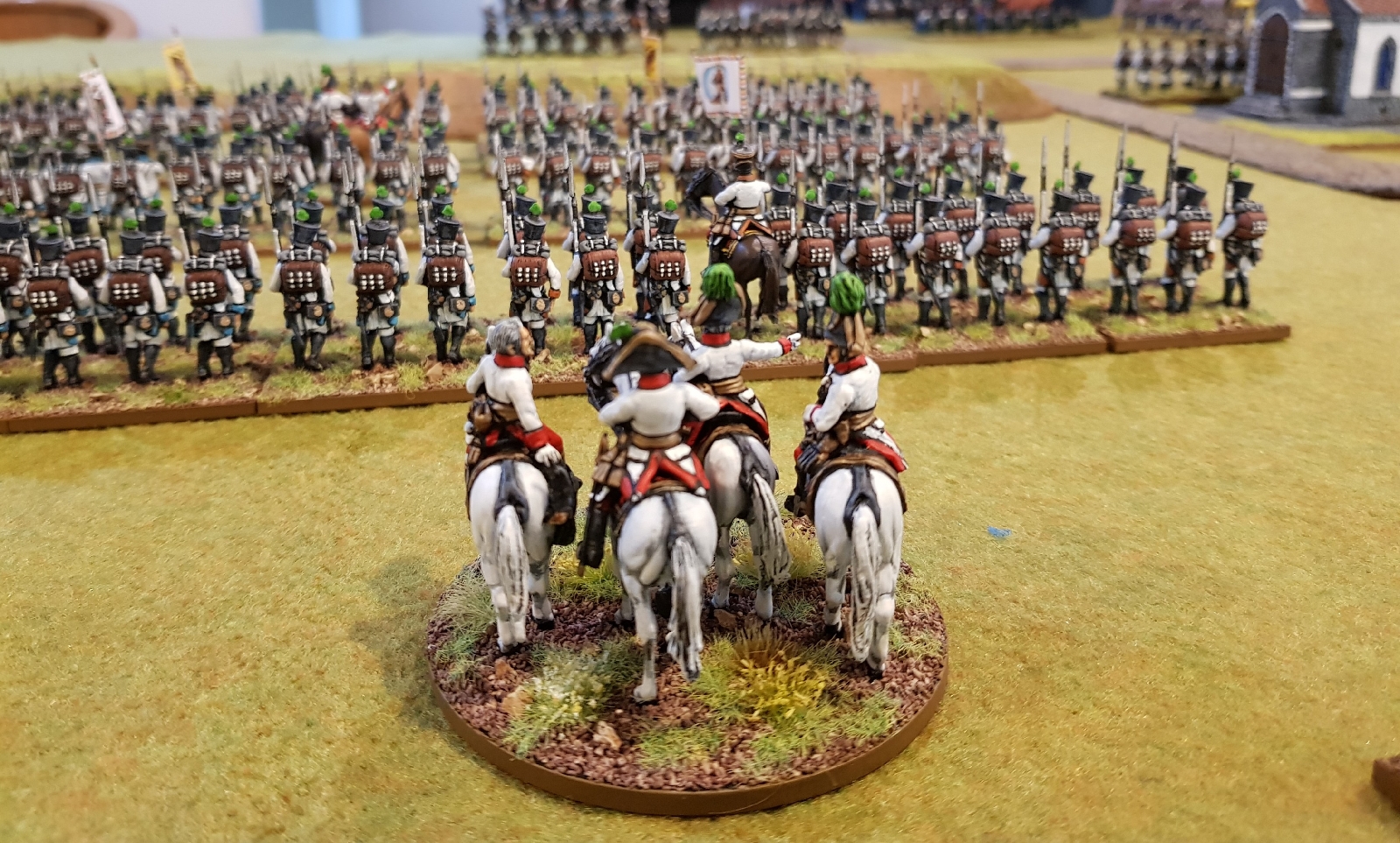 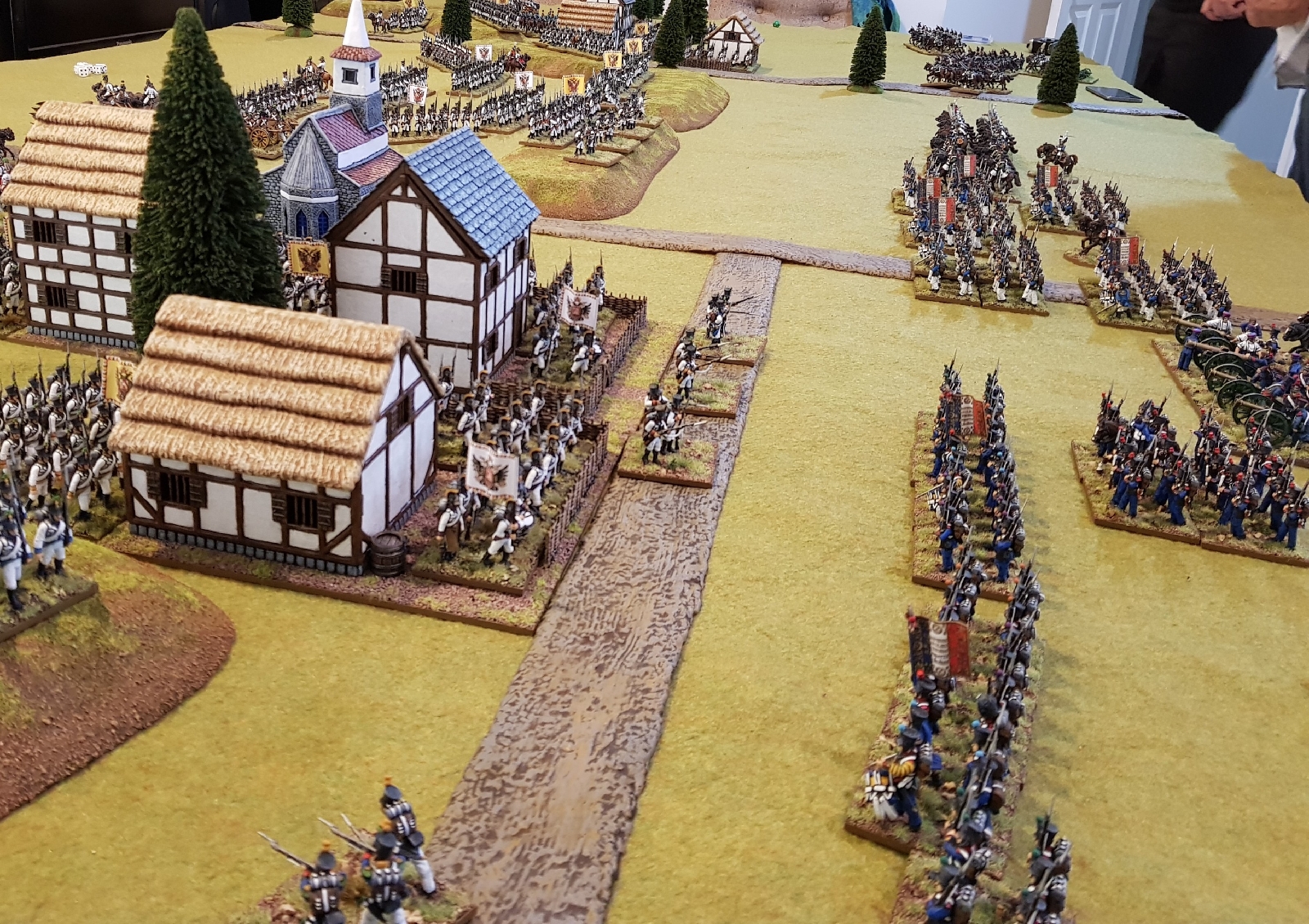 The village resulted in a game long siege, the French assaulted time after time, slowly gaining a foothold but at great cost in lost units. At a key moment, with a whole Austrian brigade on death's door, I replaced them with Veteran troops who held half the town for the rest of the day. 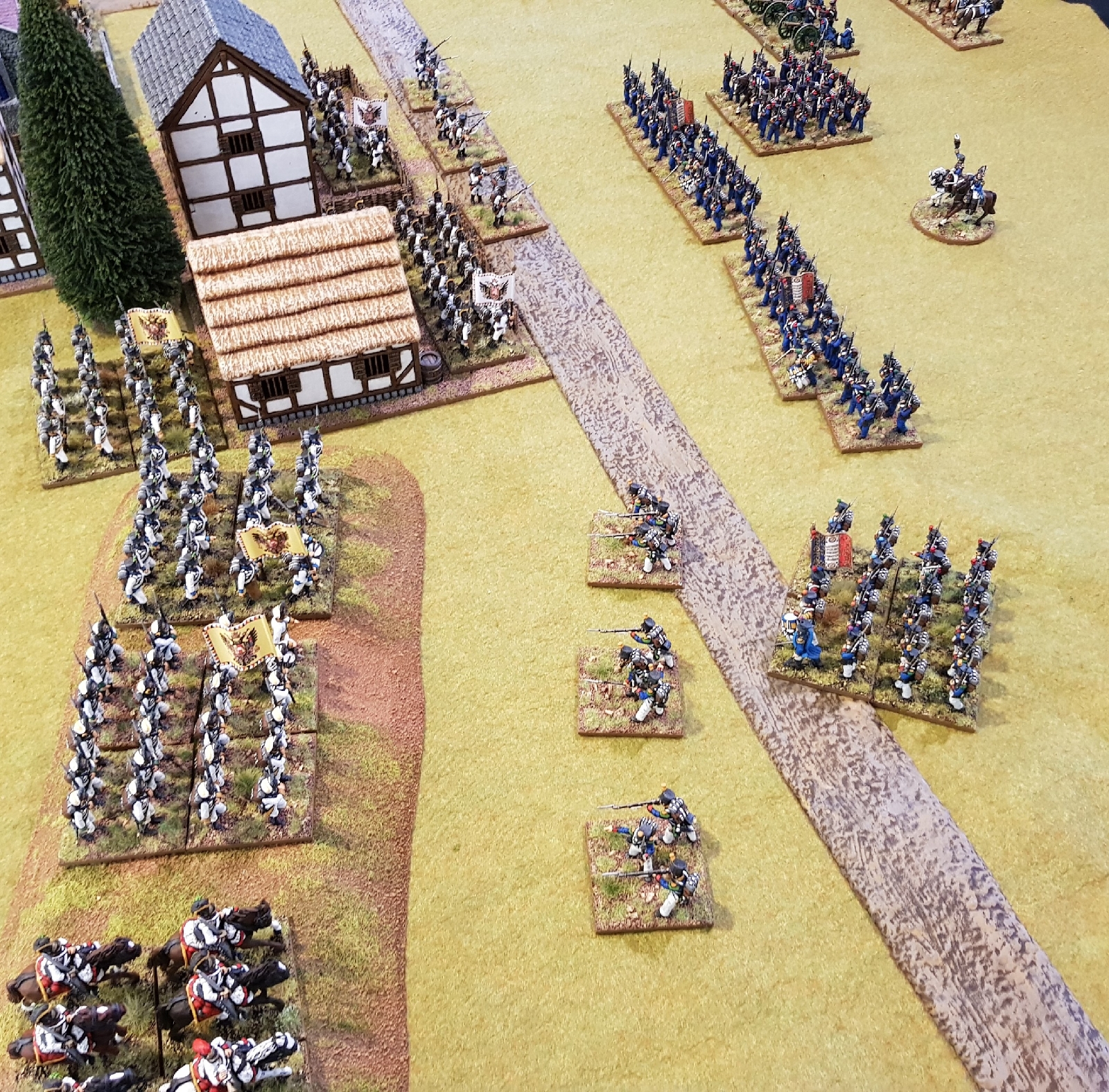 Attempting to interrupt the French Assaults, Cuirassiers and Grenadiers swoop over the hill. The Cuirrasiers charged, breaking two units before them before retiring back to safety.

The French reinforcements sweep across the ridge to face the serried ranks of Austrians conscripts. 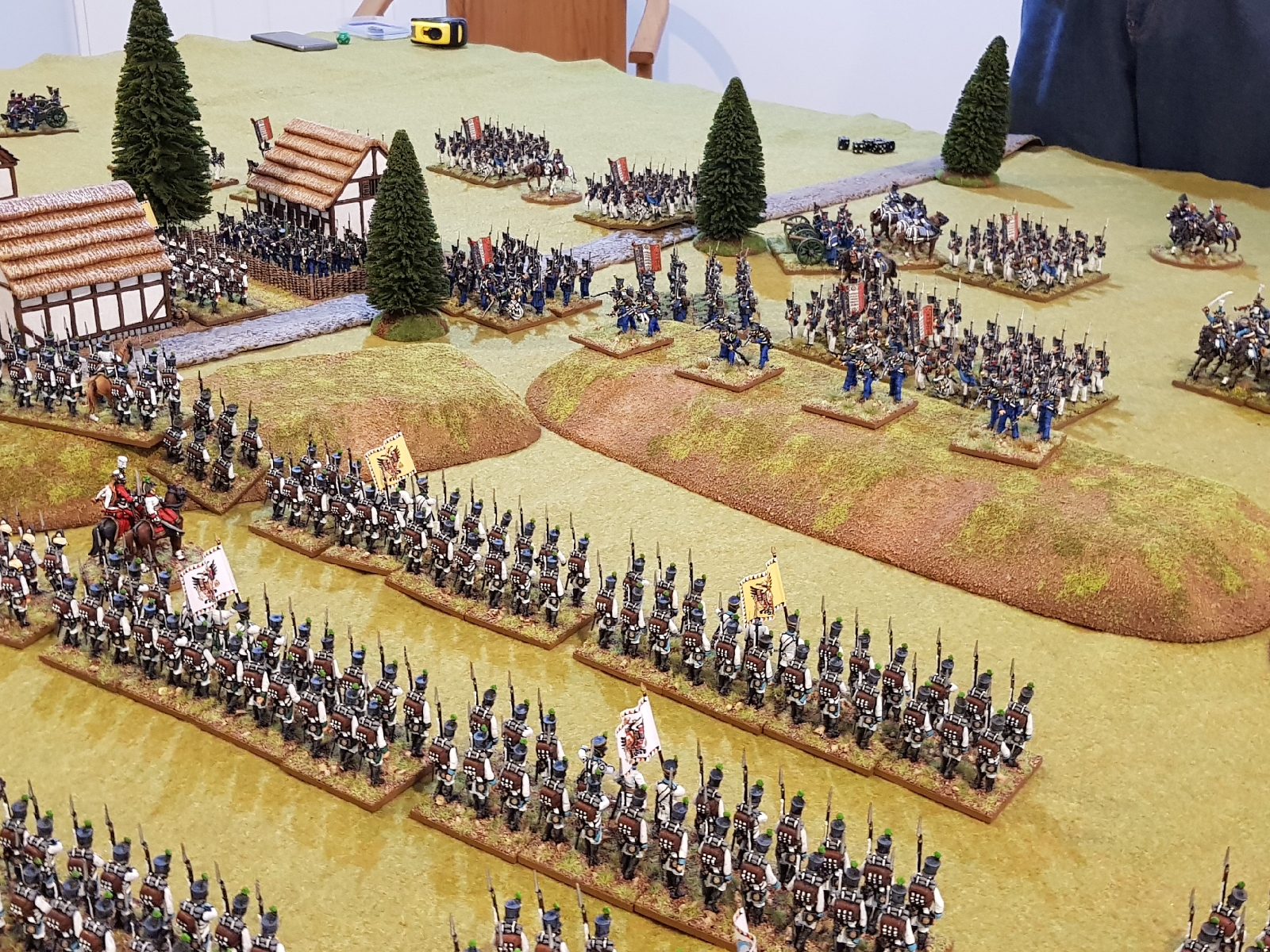 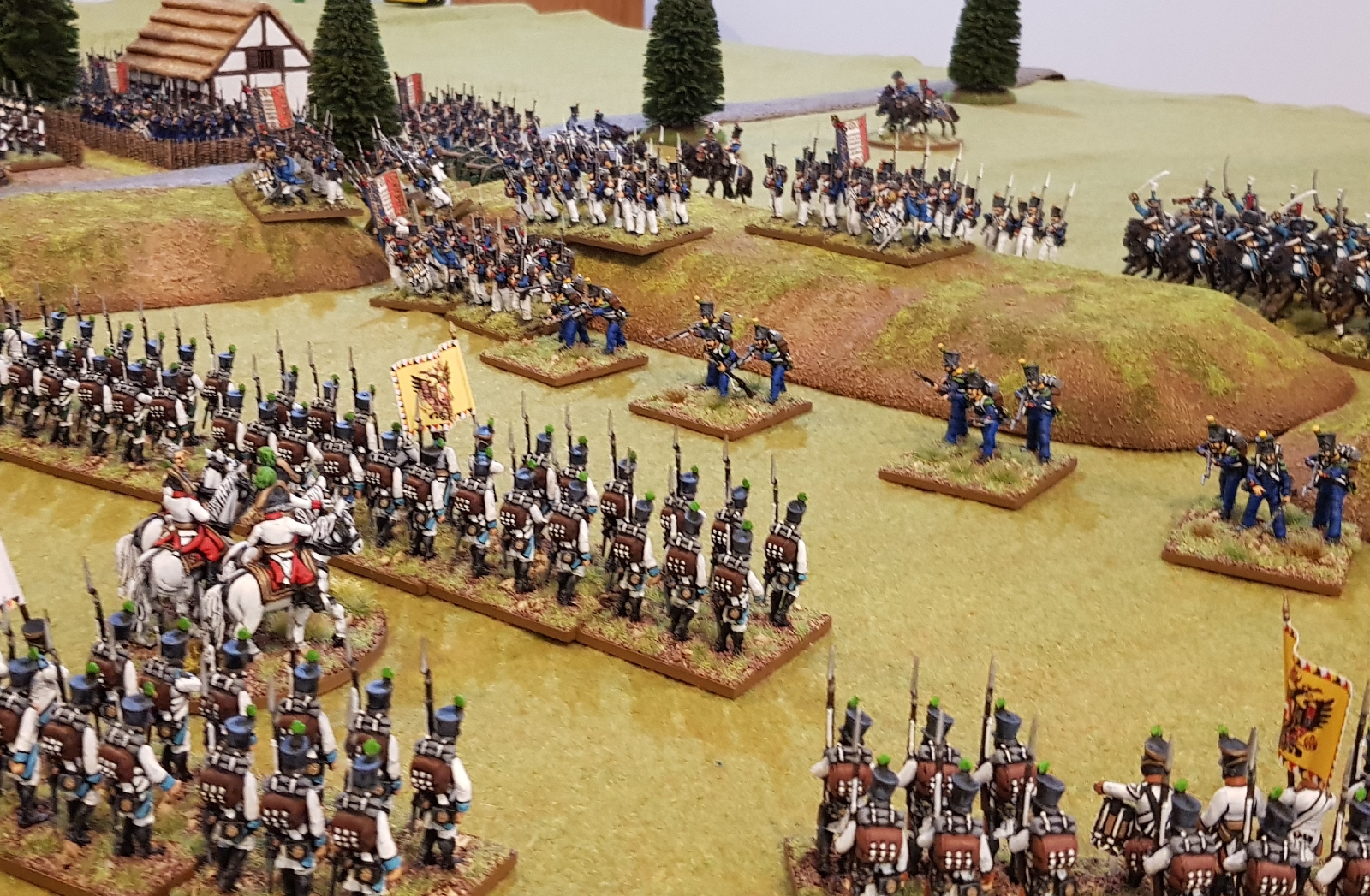 French Chasseurs charge across the ridge line, but are seen off by Uhlans, saving that section of the line from certain defeat. 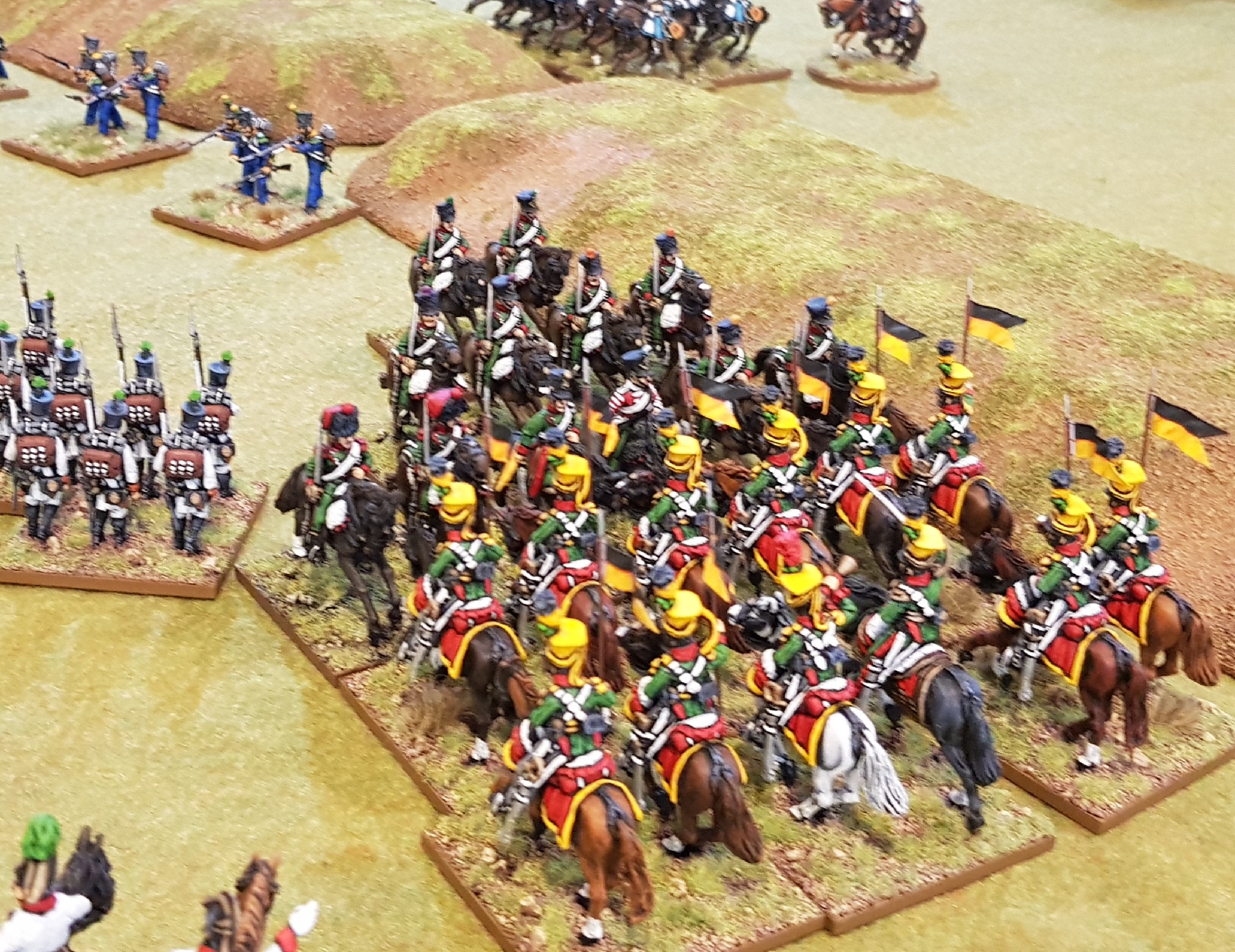 The left flank then collapsed after a unit broke and took most of it's brigade away with them, a rule mechanic came into play here that I thought was tedious, in that when a unit breaks, those around it take a morale test. However, if a unit breaks as a result of that initial morale the rest of the force takes another morale check. So in a single turn, a veteran unit had to roll morale 3 times, as a unit then broke on the second round which I thought was over the top.Simply in terms of play-ability, I did not really think too much of it, as I have seen a similar problem in another rule-set (A unit of 95th Rifles  had to roll morale 6 times in a minute in a 15mm game). But hey, lots of rules of odd mechanics and I was handling a raw army.
The casualties, 12 Austrians Units broken during the game. At around the 3/4 mark, we had lost only 5, however the great rout of the left flank increased this by 7 in around a single turn. 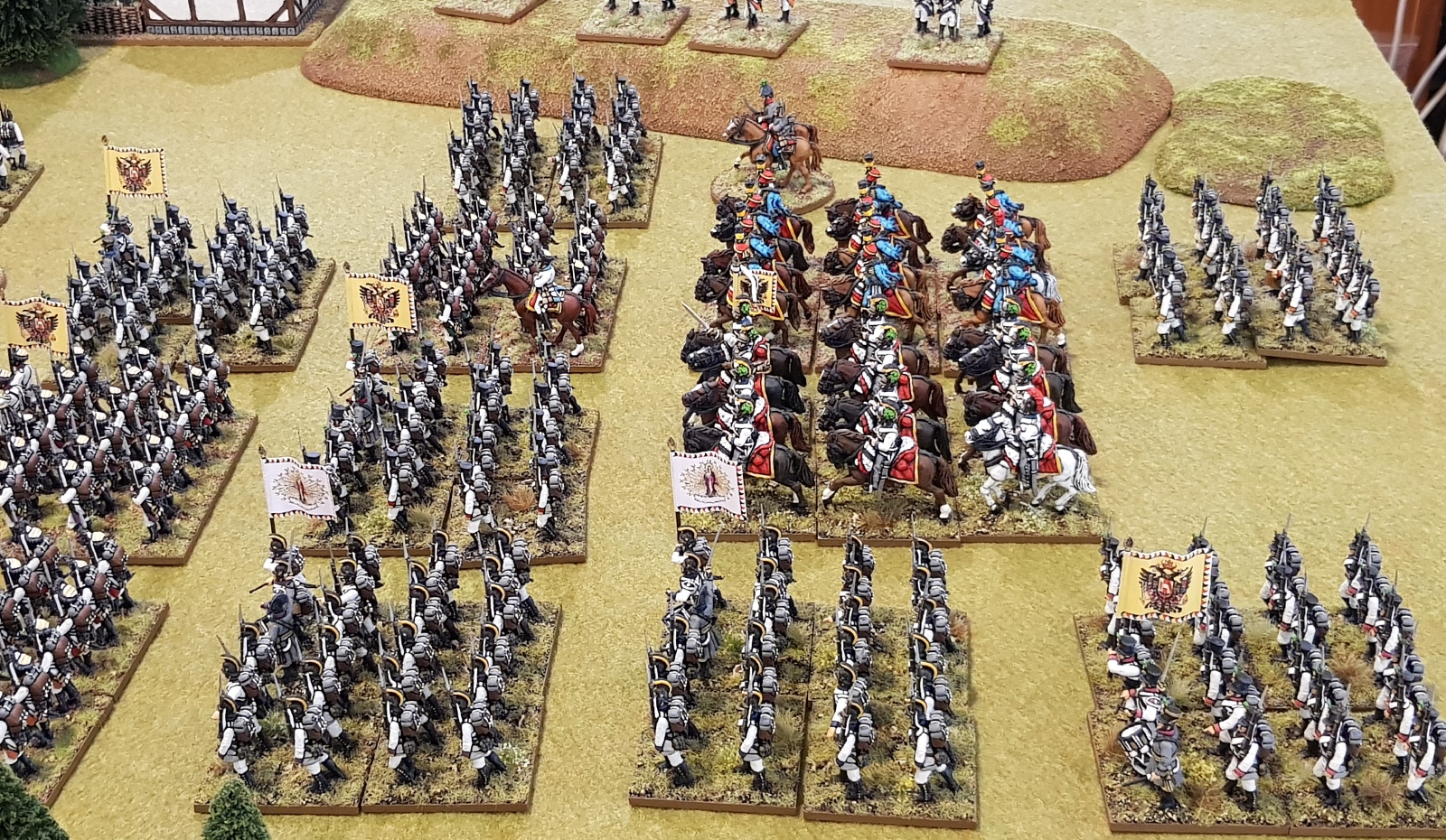 All in all it was a great game, Ion thought the game was over half way through for his French, but to me, it was far from over. My raw troops did  well, but in the end simply could not hold on long enough. Thanks to Mark for hosting!
Posted by Jacko at 2:01 PM

Excellent report thanks Paul! Good photos too!
If you can think of a better Division morale rule for when you have multiple units breaking let me know. I'm thinking just a single test per unit in a turn if any number Division units break would be better and less tedious.

I'm still working up my own AAR - might have to split it. Great to see your own view of the action, Paul. Very like gaining a glimpse of the 'other side of the hill'. I never realised just how fragile the Austrian army was (supposed to be). But then, the French on the day had some appalling luck throughout most of the action, apart from that one glorious cavalry charge!

Your Affiliate Profit Machine is waiting -

It's super easy how it works...

So, do you want to start making profits??

You can test-drive the system for yourself risk free...