Some years ago now Barry (Baztay in most forums) dragged me into his imagination campaign area of Rechburg. It was  a large island full of large nations of which there were several players though the campaign fizzled out due to some player conflict and the scope of the whole thing. We often fought battles using Napoleonic troops and it was fun, the campaign itself was later changed to Barry's solo effort with myself and Archduke Piccillo playing small parts when Barry needed input. Roughly at the same time Archduke Piccillo purchased a horde of 28mm WSS figures, which of course resulted in my purchase and likewise Barry joining in.

Alas shortly after Barry became ill and before he passed away he gave me his figures with a general (as I recall) guideline of :

"Wife will throw these out when I'm gone, I tried to paint them but they are terrible so you take them, paint them and play with them. Paint a general figure as me and for fucks sake make me look good"

So my I have been working on it ...slowly and after 3 years I have made a good start.

Below is his Royal Highness Prince Baztay Constantine of Herzogtum Rechburg at the head of his bodyguard, the Prince Constantine Infantry Battalion. 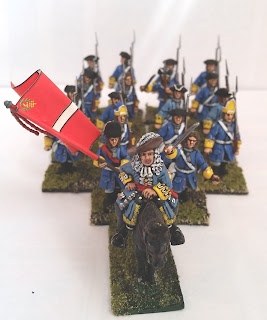 (I painted the general a long time ago but have finally finished his troops, the rest of the army is undecided as I was going to have my figures as Battle of Almansa Spanish however I have decided to assign a Spanish contingent  to Rechburg (with the Rechburgian natives looking a lot like French).

So in this time of need for the small Nation, his Imperial majesty Charles II had sent a small detachment to Rechburg to help protect his interests in the region. The first unit sent was the magnificent Morados Viejos in a rather splendid garb of Violet\Purple with red facings. 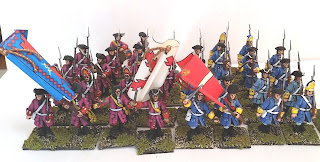 I reckon you've done Barry proud, Paul. I do miss him you know - war gaming just hasn't been the same since he went. It was also a shame that the Chronicles of Lyndhurst had to go into limbo as well. I was asked by someone whether I (or someone else) might take up the narrative. i didn't think I could do it justice, but maybe we should give it another look...

He was very creative and was able to make a simple campaign move turn into an epic chapter of some greater piece. Luckily all I had to do was move some figures around, pretend to be some local noble despot with a penchant for treachery and he would do the rest. I have some of the Rechburg information stored but I don't have the ability or creativity to continue on with that story however Watengstien or Ulrichstien (I think it was anyway) could always continue as that was often a side show.

Ulrichstein was my own creation that Barry fitted into his own campaign narrative. His was set about several decades after mine. My own brief Ulrichstein campaign was set in the 1730s I think; his around 1809 or thereabouts. I recall writing the lyrics to a song (to the tune of Battle of New Orleans) that referred to his campaign, and not mine. In my story, the Imperialists restored order to the Bishopric. In Barry's the Bishop was defeated and fled the country. That inspired this little rhyme:

"The gentle Archduke Ferdinand,
Taking a delicate matter in hand,
Clipped the Bishop over the ear;
Whereat the prelate recoiled in fear,
Seized a horse that was standing near,
And fled the country for many a year.
Never more was he seen in the land,
For fear of Archduke Ferdinand."