I have been bored recently so started painting up some 18th Century characters I have had mixing around for an eternity, they were only 90% but I could just not resist getting them into a game. Below are my two bootleggers taking their booty away from the French, while a Westphalian Guard officer talks to some young lady. 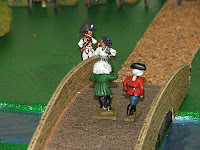 At the end of the battle, the officer leads his lady friend away whilst a number of ruffians follow behind. (Spanish troops hide in the Orchard behind them) 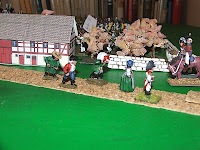 As part of the ongoing 1810 Spanish Campaign, our beloved Spanish Heroes found themselves having to defend a bridge near Badajoz against a French Corps intent on besieging the fortress. As it was such a good opportunity to bleed the French at the bridge, Brigadier La Carrrera opted to do so. Below is the French attack on the bridge, masses of french faced by 4 Battalians of concripts and a 4 pounder battery. 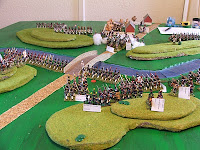 My little 4 pounders pasted the French with an epic display of marksmanship, the french did eventually get across the river but were seen off by the Voluntarios de Jaen, who charged in column and routed a French unit. Unfortunately they then pursued across the bridge into the French army and we lost forever. Below the Spanish heroes pursue valiently into a 12 pounder battery at grapeshot range, this actually saved my gunline as it gave me time to bug out and not get a 12 pounder bashing. 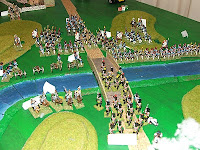 After that I decided it was time to retire as I didnt need this brigage getting a stomping, also below are some French wounded I have that I also decided to paint up. 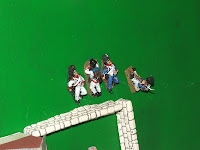 And luckily for me Santa has just deposited 300 15mm Old Glory figures in my letter box :)
Posted by Jacko at 4:40 PM